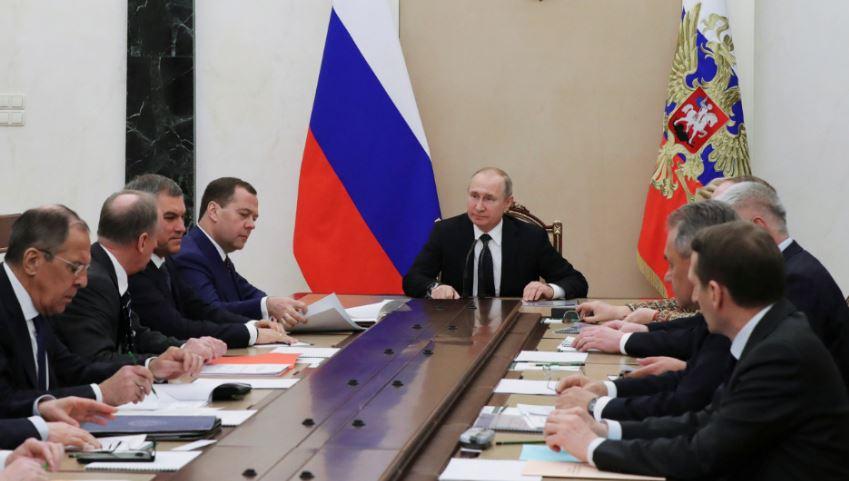 MOSCOW -- The new U.S. sanctions against Russia announced on Thursday failed to grab many headlines in Moscow on Friday morning, CBS News correspondent Elizabeth Palmer reports. That's because the big story, at least for public consumption, as far is the Kremlin is concerned, is Russia's presidential election -- just 48 hours away.

But while President Vladimir Putin has remained steadfastly focused on getting out the vote for an election he is virtually assured of winning, one Russian official has reacted to the Trump administration's latest round of punitive measures.

Deputy Foreign Minister Sergei Ryabkov said Friday that Russia would expand its "black list" of American citizens who can't visit or do business in Russia.

The U.S. Treasury on Thursday sanctioned 19 Russian nationals and five entities in retaliation for Moscow's meddling in the U.S. presidential election in 2016. The new sanctions represent the most significant response yet by the Trump administration to Russia's election interference.

"From the very beginning, we use the principle of parity on the number of people included in sanction lists. So we will expand our 'black list' with another group of Americans," Ryabkov said, according to Russia's state-run media.

He didn't rule out further measures in retaliation for the U.S. sanctions.

While Ryabkov said Moscow did not wish to sever all communications with Washington, he blamed the mounting tensions on "American political stubbornness," and warned that U.S. lawmakers were "playing with fire by destroying Russian-American relationship because simultaneously they shake global stability."

Also fuelling the tension between Russia and the West as Putin prepares to win another term in office, is the case of the poisoned Russian ex-spy in England.

Palmer says Foreign Minister Sergey Lavrov has vowed Russia will soon expel British diplomats in a tit-for-tat retaliation for Britain's expulsion of 23 Russian diplomats -- all identified as "undeclared" intelligence agents -- who have been told to leave the U.K. within a week.

Lavrov and other Russian officials have sought to cast doubt on the allegations, saying Britain has refused to share information on the deadly chemical nerve agent used in the attack on former double agent Sergei Skripal and his daughter in Salisbury, England.

The British government says the nerve agent Novichok was used in the attack -- a substance developed exclusively by Russia toward the end of the Cold War. President Donald Trump and the leaders of France and Germany joined British Prime Minister Theresa May on Thursday to directly pin blame for the attack on Russia.

The allies said in a joint statement that Russia's failure to respond to Britain's "legitimate request" for an explanation "further underlines its responsibility."

They said the first use of a nerve agent on European soil since World War II represented "an assault on U.K. sovereignty" and "a breach of international law" which "threatens the security of us all."

Peskov slammed Johnson's remarks as "shocking and unforgivable behavior from the point of view of diplomacy."

Earlier Friday, Lavrov, again -- as the Russian government has done since the accusation was first levelled -- pointed to Britain's refusal to directly share its evidence with Moscow.

"If they were honest they would answer our questions," he said.

On Thursday, British defense chief Gavin Williamson told BBC News that the U.K. government felt it had the right to tell any nation demanding physical evidence of a crime it was accused of committing on British soil to, "go away and shut up."

Britain has said it will provide a sample of the nerve agent used in the Skripal attack to the Organization for the Prohibition of Chemical Weapons (OPCW), the United Nations chemical weapons watchdog agency, where the Russians will have access to it.

Russia has never admitted to developing or possessing Novichok nerve agent, and a senior Russian official said Thursday night there's no proof it even exists.

As Palmer reports, Russia's ongoing denials and indignation do not bode well for prospects of ever getting to the truth about the attack in southwest England, which has left both of the Skripals and a police officer hospitalized.