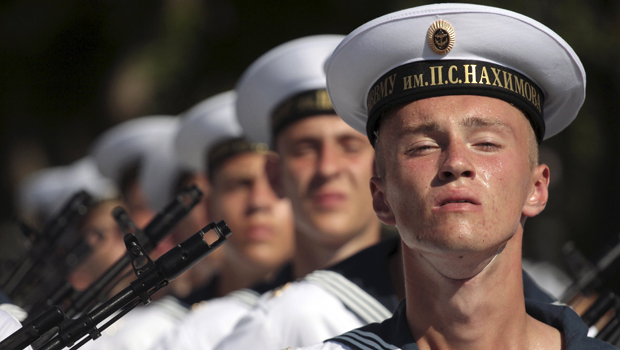 The U.S. has learned of more indications that Russia is setting up a forward operating base for air operations in Syria, CBS News national security correspondent David Martin reports.

About 100 Russian marines have been spotted at Assad International Airport near Latakia, and at least one more transport aircraft has arrived, U.S. officials told Martin. Over the past few days, three giant Russian Condor transport aircraft have flown into the airfield, Martin reported Tuesday.

The troops and equipment are coming out of southern Russia, the U.S. officials said. The first passenger flight flew over Bulgaria and Greece, but after that route was shut down all subsequent flights have gone over the Caspian Sea and through Iran and Iraq.

A couple of Russian amphibious ships have also unloaded equipment at its naval base in Tartus, Syria, which is about 60 miles away from Latakia.

Moscow, which has backed Syrian President Bashar Assad throughout the nation's 4 1/2-year civil war, said its military experts are in Syria to train its military to use weapons supplied by Russia.

Russian Foreign Ministry spokeswoman Maria Zakharova accused the West of creating "strange hysteria" over Russian activities there, saying that Moscow has been openly supplying weapons and sending military specialists to Syria for a long time.

"Russia has never made a secret of its military-technical cooperation with Syria," she said, adding that she could "confirm and repeat once again that Russian military specialists are in Syria to help them master the weapons being supplied."

President Vladimir Putin and other Russian officials have sought to cast weapons supplies to Assad's regime as part of international efforts to combat the Islamic State of Iraq and Syria, or ISIS, and other militant organizations in Syria.

On Friday, Putin didn't rule out a bigger role. Asked if Russia could deploy its troops to Syria to help fight ISIS, he said "we are looking at various options."

By playing with the idea of joining the U.S.-led coalition fighting ISIS, Putin may hope to reset ties with the West, which were shattered by the Ukrainian crisis, and also protect Moscow's influence in Syria. But the U.S. and its allies have seen Assad as the cause of the Syrian crisis and Washington has warned Moscow against beefing up its presence.

U.S. Secretary of State John Kerry called his Russian counterpart Sergey Lavrov over the weekend to express concern, warning that if reports about the Russian military build-up in Syria were accurate, it could further escalate the conflict, increase refugee flows and raise the threat of confrontation with the U.S.-led coalition fighting ISIS.

The Russian Foreign Ministry said Lavrov and Kerry again discussed Syria on Wednesday, with Lavrov emphasizing the role of the Syrian government troops in confronting extremists groups and the need to take consolidated action.