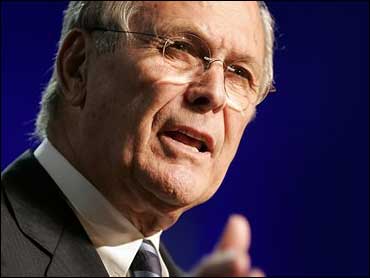 Defense Secretary Donald H. Rumsfeld said Tuesday the world faces "a new type of fascism" and likened critics of the Bush administration's war strategy to those who tried to appease the Nazis in the 1930s.

In unusually explicit terms, Rumsfeld portrayed the administration's critics as suffering from "moral or intellectual confusion" about what threatens the nation's security. His remarks amounted to one of his most pointed defenses of President Bush' war policies and was among his toughest attacks on Bush's critics.

Speaking to several thousand veterans at the American Legion's national convention, Rumsfeld recited what he called the lessons of history, including the failure to confront Hitler. He quoted Winston Churchill as observing that trying to accommodate Hitler was "a bit like feeding a crocodile, hoping it would eat you last."

"I recount this history because once again we face similar challenges in efforts to confront the rising threat of a new type of fascism," he said.

"Can we truly afford to believe that somehow, some way, vicious extremists can be appeased?" he asked.

"Can we truly afford to return to the destructive view that America — not the enemy — is the real source of the world's troubles?"

Rumsfeld spoke to the American Legion as part of a coordinated White House strategy, in advance of the fifth anniversary of the Sept. 11, 2001, terrorist attacks, to take the offensive against administration critics at a time of doubt about the future of Iraq and growing calls to withdraw U.S. troops.

Rumsfeld recalled a string of recent terrorist attacks, from 9/11 to deadly bombings in Bali, London and Madrid, and said it should be obvious to anyone that terrorists must be confronted, not appeased.

"But some seem not to have learned history's lessons," he said, adding that part of the problem is that the American news media have tended to emphasize the negative rather than the positive.

He said, for example, that more media attention was given to U.S. soldiers' abuse of Iraqi prisoners at Abu Ghraib than to the fact that Sgt. 1st Class Paul Ray Smith received the Medal of Honor.

He did acknowledge that the U.S. military has its own "bad actors — the ones who dominate the headlines today — who don't live up to the standards of the oath and of our country." But he added that they are a small percentage of the hundreds of thousands of troops who have served in Iraq and Afghanistan.

"Those who know the truth need to speak out against these kinds of myths and lies and distortions being told about our troops and about our country," he said.

Secretary of State Condoleezza Rice was addressing the American Legion convention later Tuesday, and Bush is scheduled to speak here later in the week. On Monday, Vice President Dick Cheney and Rumsfeld made separate addresses to the national convention of the Veterans of Foreign Wars in Reno, Nev.

Rumsfeld made similar arguments in Reno about doubters of the administration's approach to fighting terrorism, saying too many in this country want to "blame America first" and ignore the enemy.

Sen. Jack Reed, D-R.I., a former Army officer and member of the Senate Armed Services Committee, said in an interview Tuesday that "no one has misread history more than" Rumsfeld.

"It's a political rant to cover up his incompetence," said Reed, a longtime critic of Rumsfeld's handling of the war.

Reed said he took particular exception to the implication that critics of Pentagon policies are unpatriotic, citing "scores of patriotic Americans of both parties who are highly critical of his handling of the Department of Defense."

Rumsfeld defended the war in Iraq, saying that while U.S. military tactics have changed as conditions on the ground have changed, the administration's war strategy has remained constant: "to empower the Iraqi people to defend, govern and rebuild their own country."

In arguing against giving up in Iraq, he said people should know from history that wars are never easy.

"You know from experience that in every war — personally — there have been mistakes and setbacks and casualties," he said. "War is, as Clemenceau said, 'A series of catastrophes that results in victory.'"