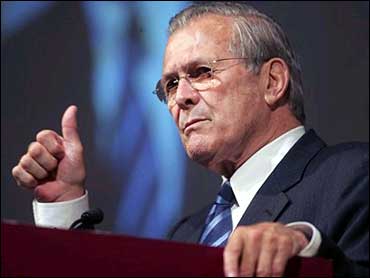 Defense Secretary Donald H. Rumsfeld on Saturday said China is not a threat to the United States but is building up its military without being threatened by any other country.

Rumsfeld challenged China at a regional security conference here, particularly its placing hundreds of missiles in range of Taiwan. He said China was also sharply increasing its military spending and buying large amounts of sophisticated weapons.

"Since no nation threatens China, one must wonder: Why this growing investment? Why these continuing large and expanding arms purchases?" Rumsfeld said at the conference organized by the International Institute of Strategic Studies, a private, London-based think tank.

China's response was immediate. Cui Tiankai, the director of the Asia bureau of China's foreign ministry, was in the audience for Rumsfeld's speech and told The Associated Press afterwards that he disagreed.

"Since the U.S. is spending a lot more money than China is doing on defense, the U.S. should understand that every country has its own security concerns and every country is entitled to spend money necessary for its own defense," Cui said.

Rumsfeld signaled a harder line against China from the Bush administration, which has criticized Beijing over trade and human rights issues but not directly challenged the Chinese military buildup.

China now has the world's third-largest military budget, he said, behind the United States and Russia. He did not say how large the U.S. believes China's military budget is.

Cui responded sharply to Rumsfeld during a question-and-answer session.

Rumsfeld said he does not think any country threatens China and that the United States does not see China as a threat.

Central to the disagreement is Taiwan, a self-governing island Beijing regards as a renegade territory.

China has said it will attack Taiwan if the island tries to declare independence, and it repeatedly calls on the United States to stop selling weapons to Taiwan. Beijing denounced a joint U.S.-Japan statement earlier this year saying the two allies shared the objective of a peaceful resolution of the Taiwan issue.

The United States is urging the European Union to keep in place its ban on selling weapons to China. Washington argues that any European weapons sold to China could be used in a conflict over Taiwan.

"Ultimately, China will need to embrace some form of a more open and representative government if it is to fully achieve the political and economic benefits to which its people aspire," he said.

The defense secretary, who has said he would like to visit China this year, also pressed Beijing to use its influence with North Korea to restart six-nation talks over Pyongyang's nuclear weapons program. North Korea has stayed away for a year from the talks with China, the United States, South Korea, Japan and Russia.

Rumsfeld said the United Nations may need to decide what to do about the nuclear threat from North Korea, which declared in February that it has atomic bombs. North Korea says it needs a nuclear deterrent because of what it calls Washington's "hostile policy" against it.

"I believe these efforts are very much respected," Yoon told reporters after the meeting.

Rumsfeld said North Korea is a worldwide threat because of its record of selling missile technology and other weapons.