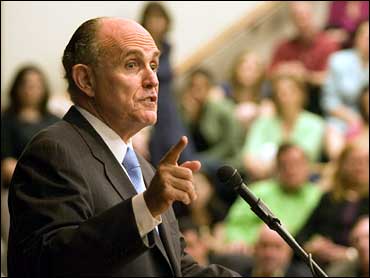 Republican presidential candidate Rudy Giuliani on Friday urged U.S. conservatives to look past his support for abortion rights, arguing that his divergence on the issue should not disqualify him from being the party's nominee.

The former New York City mayor has struggled in the last week to explain his personal opposition to terminating pregnancies with his long record of favoring a woman's right to choose. He has defended his positions — and some say contradictory comments — on late-term abortion, public funding for abortions and the 1973 U.S. Supreme Court decision that legalized abortion.

"Everybody's got to make a choice," Giuliani told about 500 students, faculty and staff crammed into an auditorium at the conservative Houston Baptist University. "How important are the differences and how important are the other issues we may agree on."

What most concerns the Giuliani camp is not that he will lose votes from abortion foes, CBS News senior political correspondent Jeff Greenfield reported on The Early Show Friday. The campaign expects that. What worries them is that voters will no longer see him as the straight-shooting, tell-it-like-it-is, here's what-I believe candidate.

It is better for him to make that position clear now, one top Giuliani aide told Greenfield, than lose his credential as a candidate who stands by his beliefs.

Giuliani emphasized his conservative credentials on tax cuts, crime and the war in Iraq before clarifying his support for abortion rights, a position he acknowledged was unlikely to be shared by those listening.

Describing his belief that abortion was "morally wrong," Giuliani said he has opposed it all his life. But he said he believes the decision should ultimately be left to individuals and that their decisions should be respected.

"In a country like ours ... I believe you have to respect their viewpoint and give them a level of choice. I would grant women the right to make that choice," he said.

Several students praised Giuliani's speech, but said it was unlikely to make them support his candidacy.

"Overall, I thought it was a great speech," said Erik Mignault, a 25-year-old political science major. "I think it was a good political stance to take. He's sitting right in the middle."

But Mignault and several other students said they were strictly anti-abortion and likely to support a more conservative candidate.

"I think that what he's banking on is that no issue ignites the Republican base like the war on terror," CBS News political consultant Nicole Wallace said on The Early Show Friday. "So I think the hope and the gamble are that his credentials are so rock solid on that issue, that he'll be able to say 'let's agree to disagree on this one'."

Giuliani told the audience that they should support a candidate who could protect America from terrorism and from Democratic assaults on the economy. He acknowledged that abortion was the issue that most divided them.

"We understand how to respect each other's differences," he said.