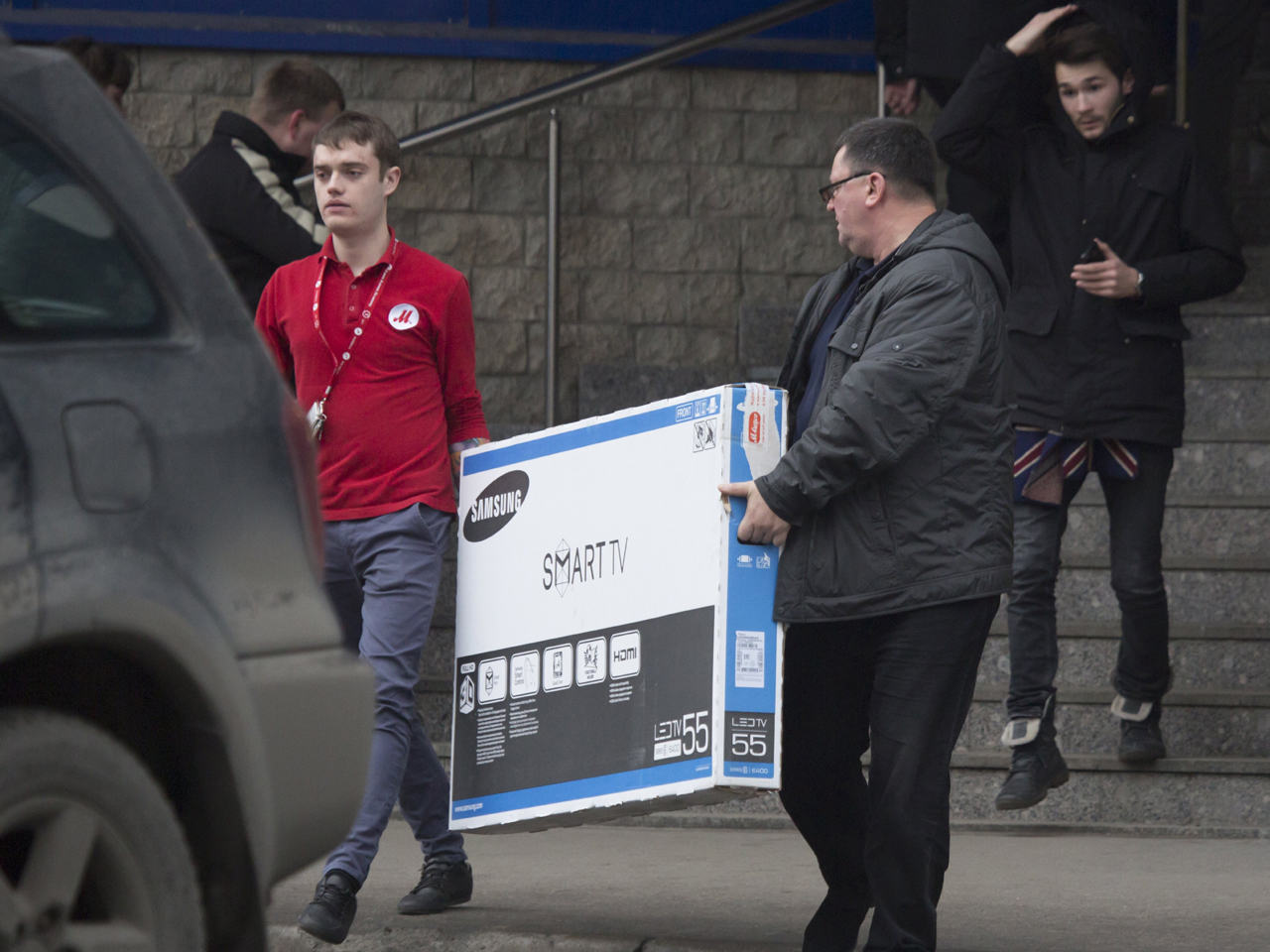 MOSCOW - The Russian government looked at ways of easing the selling pressure on the ruble Wednesday amid fears the country may face a full-blown bank run and as consumers look to buy big-ticket items before prices rise.

Deputy Finance Minister Alexei Moiseyev was quoted by the Interfax news agency as saying that the government is going to sell foreign currency "as much as necessary and as long as necessary." That, the hope is, would relieve the pressure on the ruble, particularly against the dollar.

The ruble has lost more than 50 percent of its value this year. After posting fresh losses early Wednesday, the ruble recovered some ground and was 0.9 percent lower at 68 rubles at 1.15 p.m. Moscow time.

The ruble has suffered catastrophic losses this week as traders fretted over the impact of low oil prices on the Russian economy as well as the impact of Western sanctions imposed over Russia's involvement in Ukraine's crisis.

It has shed 15 percent of its value this week despite Tuesday's surprise move by Russia's Central Bank to raise its benchmark interest rate to 17 percent from 10.5 percent, which was intended to make it more attractive for currency traders to hold onto their rubles. At one point on Tuesday, it was down 20 percent.

In light of the currency's slide, Prime Minister Dmitry Medvedev hosted a meeting with the heads of Russia's largest exporters and pledged to implement a "package of measures" to stop the decline of the ruble. He said the details of the measures to be pursued will be hammered out at the meeting and these will be only "market steps."

"This is a very dangerous situation, we are just a few days away from a full-blown run on the banks," Russia's leading business daily Vedomosti said in an editorial on Wednesday. "If one does not calm down the currency market right now, the banking system will need robust emergency care."

Another option available to the Russian authorities to stem the selling tide could be imposing capital controls, but Russia's Economic Development Minister Alexei Ulyukayev on Tuesday denied that the government was considering doing so. However, he said the rate hike came too late.

The collapse of the national currency has spurred Russians to buy cars and home appliances before prices shoot higher. Several car dealership were reported to have suspended sales, unsure how far down the ruble will go, while Apple has halted all online sales in Russia. Swedish furniture giant IKEA is also due to raise prices Thursday, raising speculation that its stores will be very busy over the next few hours.

Andrei Klepach, deputy chairman of the state-owned VEB bank, said in comments carried by Tass that the budget up to $1.6 billion because of a weaker ruble but he warned that "the economy is collapsing."

The ruble is likely to come under more pressure this week as President Barack Obama is expected to sign legislation authorizing new economic sanctions on Russia.

Russian officials sought to project a message of confidence on state television, dwelling on the advantages of ruble devaluation, such as a boost to domestic manufacturing.

The German government's coordinator for relations with Russia, Gernot Erler, said the economic crisis in Russia was largely the result of the drop in oil prices, not the sanctions imposed by the West.

"It's an illusion to think that if the sanctions were to fall away tomorrow, the Russian economy would suddenly be all right again," Erler told rbb-Inforadio on Wednesday.