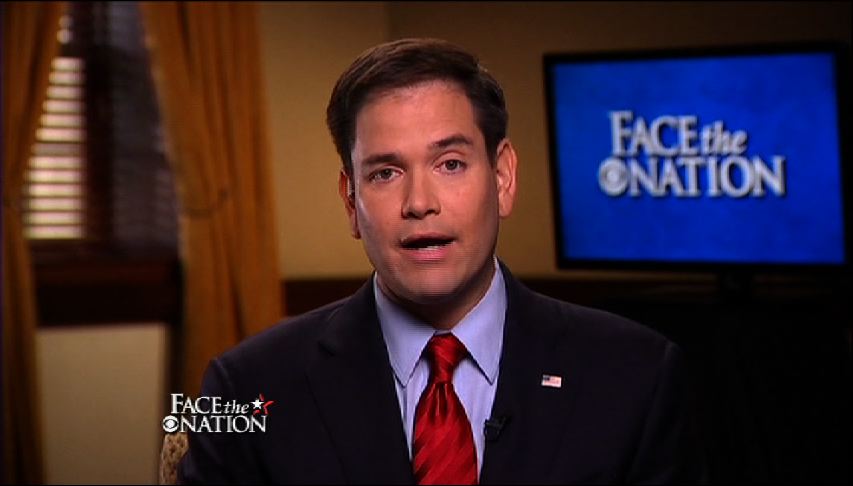 (CBS News) Sen. Marco Rubio, R-Fla., said he's "very optimistic" that Congress this week will take up a comprehensive immigration reform bill that includes a path to citizenship for 11 million undocumented immigrants currently living and working in the United States.

Rubio's comments Sunday on "Face the Nation" come one week after being indirectly chided by Sen. John McCain, R-Ariz. - along with Rubio, a member of the "gang of eight" senators that's been working toward a bipartisan immigration solution - for his reticence about "rushing" legislation on the issue.

Believed to have an eye on the 2016 presidential race, Rubio appeared on the program as one of the reform's most enthusiastic mouthpieces. Though he qualified his support, nothing that, like all processes on Capitol Hill, getting a workable package through "will take some time." Rubio said he's confident Republicans and Democrats will manage to muster the necessary votes.

"I think this bill answers all of the questions that people raise," Rubio, himself a son of Cuban immigrants. "That's why it's taken so long, that's why we spent so much time on it; that's why we continue to spend time on it.

"This bill does three things that are fundamentally important for our country," he continued. "It modernizes our legal immigration system - something we need to do no matter what. It puts in place the toughest enforcement measures in the history of the United States, potentially in the world. And it once and for all deals with the issue of those that are here illegally, but does so in a way that is fair and compassionate but does not encourage people to come illegally in the future, and isn't unfair to the people that have done it the right way."

Rubio has led conservatives in calling for tighter border security as a prerequisite to any legalization option. He was quick to negate suspicions that the plan will promote "de facto amnesty." Existing law, he argued, "is actually more lenient" than what the eight senators will propose, since under their recommendation, immigrants who decide they want to stay in the United States will have to wait "longer than 10 years" to qualify.

"This is not a theory - they are actually here," Rubio said. "We're not talking about bringing millions of people here illegally. They are here now and they are going to be here for the rest of their lives. The proposals in the past that some have advocated is to make their lives miserable so that they'll leave on their own, or to basically ignore the problem, which is happening now, and is de facto amnesty. And what we're proposing is to actually deal with them."

One tenet of the plan will outline a "rigorous background check" for green card applicants - "if they're criminals, they won't qualify," Rubio said. "If they pass ... they'll be given the opportunity to pay an application fee and a fine, and in return for that, they will get a worker permit that will allow them to stay in the U.S.; work, travel and pay taxes.

"They will not qualify for any federal benefits of any kind, including Obamacare, and they will have to be in that system for over ten years before they can apply to the existing legal immigration system for a green card - not a special path, the same path as everybody else," Rubio continued. "And of course, that will be dependent upon certain security measures being met. That means securing the border, universal e-verify, and a universal entry-exit tracking system. If those three things are not in place, that green card process won't begin, even if the ten years has elapsed."

Hoping to alleviate all-but-inevitable resistance from Republicans, Rubio emphasized that the gang's bill will also lay out measures to tighten border security.

"The fact of the matter is that while I am not in favor of a housekeeper or a landscaper crossing the border illegally, what keeps us up at night is the worry that a terrorist can come across that border one day - or the activities that are being undertaken there now by criminal gangs that are human traffickers," he said. "And so this addresses that as well."