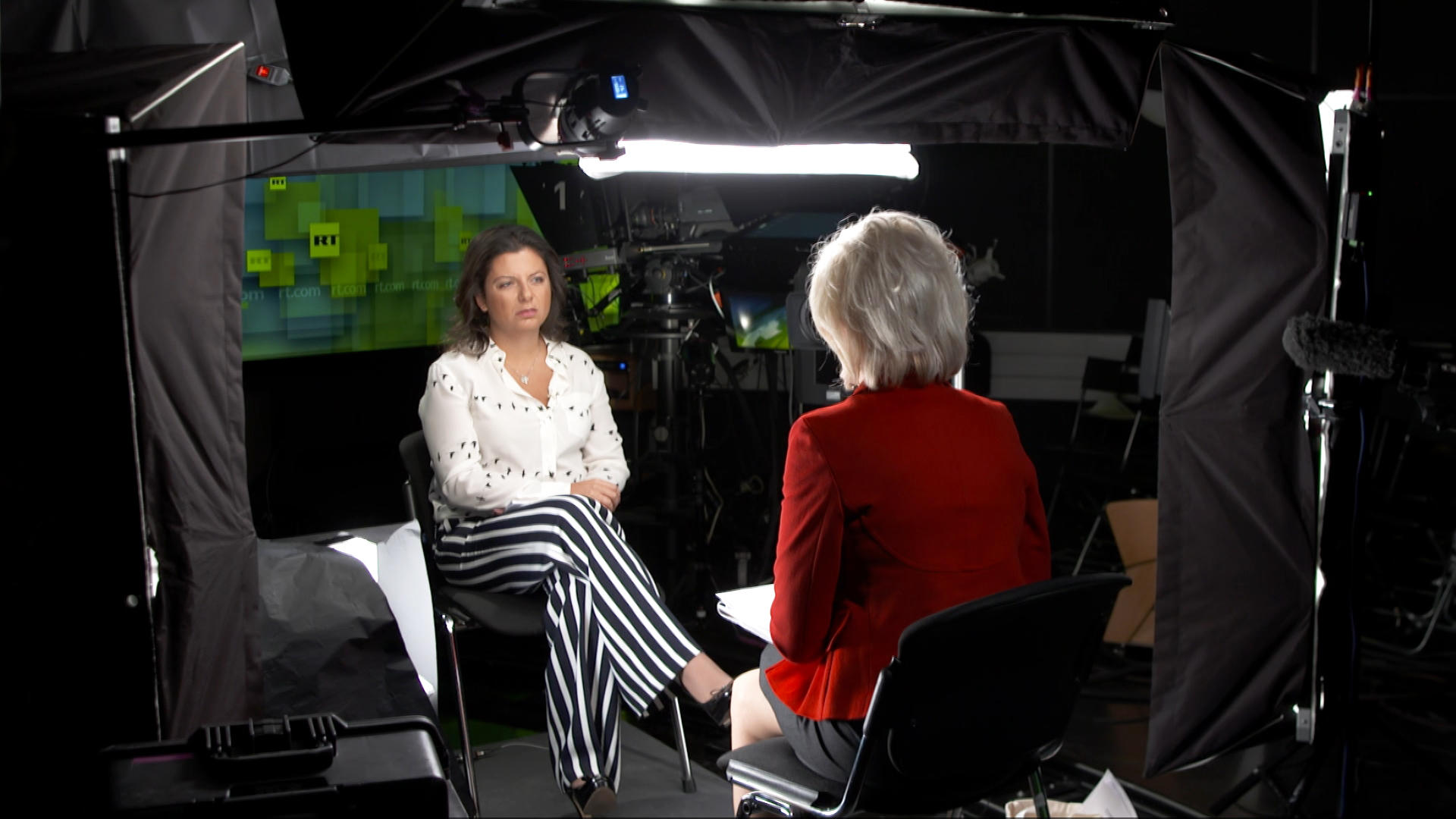 It's widely accepted that Vladimir Putin used disinformation warfare to interfere in our 2016 presidential campaign – but how exactly did he do it?  Well, according to a U.S. intelligence report one of his weapons was a Russian television network called RT.  It stands for Russia Today, and you can find it on many of our cable or satellite systems -- just like any other news outlet.

We recently went to Moscow to meet with the head of RT, Margarita Simonyan.  We arrived just as the Justice Department was insisting that RT register as a foreign agent in the United States under an 80-year-old law enacted to expose Nazi propaganda. And Simonyan was scalding mad.

Margarita Simonyan: Should we close American media in Russia because they're all anti-Putin and they wage campaigns against him every single day? Should we close them? You tell me.

Margarita Simonyan: What they're doing is destroying our reputation. Should we do the same thing here in Russia to all the American media? They're all anti-Putin. Should we do that?  Probably should, shouldn't we?

"I can't deny that there could've been Russian media that had their opinion on Twitter, on Facebook...Is that bad? Is that illegal? Isn't that what the American media do as well?"

Margarita Simonyan is blustery, a force to reckon with. She's the head of a vast, state-run TV network, with almost 2,500 employees. They broadcast around the world – with a Spanish channel for Latin America, an Arabic channel for the Middle East and four English editions: including RT UK and RT America – available on cable and satellite.  While not a lot of Americans watch RT on TV, it is widely disseminated on social media and YouTube where it has racked up more than 2 billion views. Much of their schedule is routine news-of-the-day or talk shows – including this one hosted by Larry King.

Larry King: There is no movie like this movie!

Margarita Simonyan: We wanted a CNN of our own. You can put it in these words. That would be true, I can't deny it.

Lesley Stahl: Let me tell you what U.S. intelligence agencies say about RT. And I'm talking about the CIA, FBI, and NSA.  They describe you as a weapon in an information war.

She dismisses the U.S. intelligence report that assesses "with high confidence that…Putin ordered an influence campaign…aimed at the U.S…election" and that RT, "Russia's state-run propaganda machine contributed to the influence campaign..."

Lesley Stahl: In this intelligence report there are -- I don't even know how many references to you –

Lesley Stahl: 27 references to you. A photograph of you and a cartoon of you stepping over the White House.

To most of our questions, her answer was: "Well, what about you?"

Lesley Stahl: Let's talk about Russian interference in our election.

Lesley Stahl: They say that the Russians used their websites to perpetrate pro-Trump, anti-Hillary Clinton information.

Margarita Simonyan: No. RT did not support Trump.

Margarita Simonyan: And R-- our fault is that RT did not support Hillary either.

Lesley Stahl: I know that.

Margarita Simonyan: I wanted to win somebody who would be nicer to Russia.

Lesley Stahl: Did you get that?

Margarita Simonyan: No. Is it even possible? We don't know.

One curiosity is RT's connection to Michael Flynn – President Trump's former national security adviser, who has pled guilty to lying to the FBI in the Russia probe. Simonyan invited him to RT's 10th anniversary gala in 2015.

Lesley Stahl: You paid him $45,000 to come to the event. And sat him next to Mr. Putin. It just conjures up the idea that eventually he may have been some kind of a conduit when he did get close to Trump.

Margarita Simonyan: Because he sat next to Putin in very--

Lesley Stahl: Not because he sat next to Putin. That there was some relationship.

Margarita Simonyan: With Putin? Putin didn't know who he was. I give you my word on that.

But members of Congress want this further investigated since Flynn failed to disclose these contacts on his security clearance forms.

Lesley Stahl: So you've had this job for how long?

Lesley Stahl: You started when you were 25.

She was a young reporter covering the Kremlin at the time, and Putin liked her work. So when RT was created, she was tapped to be the editor-in-chief of the new state-owned TV network.

Lesley Stahl: I marvel that a 25-year-old was given that job.

Margarita Simonyan: I do too. But it worked, didn't it?

When it started the focus was on happy stories about Russia. But according to U.S. intelligence, under her leadership and Putin's guidance, RT morphed into a tool to attack the West. Its budget – set by the Kremlin - grew tenfold to over $300 million a year. That's because RT is part of a larger strategy.

"I am not at any kind of war. I have two children. I'm a journalist. I've been a journalist ever since I was 18."

Five years ago, Russia's highest-ranking military officer wrote what's known as the Gerasimov Doctrine, saying that in warfare information can be more effective than a military weapon. An idea that was then put into action:

Lesley Stahl: Your defense minister said in February that he had formed a new branch of the military called "Information Warfare Troops."

Margarita Simonyan: I don't know if that's the case, if that's what the military is doing.  We know that that's what NATO has been doing for years and years. They are military; we are not military.

Lesley Stahl: In 2012, you said that Russia needs RT the same way it needs a Defense Ministry. And you've also said, RT was fighting, quote, "An information war against the whole Western world."

Margarita Simonyan: I am not at any kind of war. I have two children. I'm a journalist. I've been a journalist ever since I was 18.

Before that she was kid growing up in southern Russia.

Margarita Simonyan: We were extremely poor, our family. We had rats this big in– I can't even call it a house in the room where we lived with my parents and my sister.

Lesley Stahl: This was in the Soviet time?

Back then, she says she was a big fan of the United States, especially when she was an exchange student in Bristol, New Hampshire.

Margarita Simonyan: I was 15.

Lesley Stahl: I get the impression though that your views of the United States have kinda curdled.

Margarita Simonyan: It didn't just happen to me. It happened to more or less all of Russians in 1999 when you bombed Yugoslavia.

The U.S. called that NATO operation a humanitarian intervention to prevent ethnic cleansing. But to Russia, it was a sign of U.S. aggression too close to home.

Margarita Simonyan: We found that absolutely unfair, outrageous-- illegal because it wasn't approved of by the United Nations. It was a shock. America had Russia wrapped around it little-- little pinky through the whole '90s. We did everything you told us. And we were eager to do more and more. The whole nation-- Russian nation was like, "Tell us what else we can do to please you. We want to be like you. We love you." And then in 1999 bam. You bomb Yugoslavia. And that was the end of it. In a minute, in one day. And that's when you lost us unfortunately.

Tensions between our two countries have only grown, leading up to the 2016 election during which RT was accused of going out of its way to delegitimize Hillary Clinton.

Guest: Secretary Clinton has engaged in behavior that is criminal that anybody else would be going to jail for.

Host: We ask Julian Assange whether he has the email that could put Hillary Clinton in prison.

RT's most popular segment about candidate Clinton – with over 10 million views online – vilified her as hopelessly corrupt:

That's not accurate, but it's right out of the Russian playbook: disinform and distort in order to destabilize. RT often interviews as experts conspiracy buffs, white supremacists and actors. It traffics in anti-American crazy theories like tying terror attacks to the FBI or accusing the Pentagon of inventing Ebola.

Host: Can you blame anyone for distrusting the U.S.'s medical intentions at this point?

They air a steady diet of violent protests and racial conflict to suggest the U.S. lacks the moral high ground to criticize Russia and is collapsing from internal divisions.

Lesley Stahl: A lotta your pieces are about what's wrong with the United States.

Margarita Simonyan: Right now if we open a website of the American media funded by the American government and read what is there right now that is what screams that not only Russian democracy is evil, Russia is evil, Russian's authorities are evil, people are pretty much evil.

No question we interpret events thru our separate realities. Typically on RT: NATO is bad; Assad of Syria is not. The U.S. foments conflict, Russia does not.

Lesley Stahl: You're telling me you didn't invade Crimea?

Margarita Simonyan: No we did not. You call it invasion.

Lesley Stahl: Well, what do you call it?

Margarita Simonyan: We call it the free will of the people.

And now European leaders agree with the U.S. intelligence report. French President Emmanuel Macron – with Putin at his side, accused Russia of interfering in their election, calling RT an agent of propaganda.

And British Prime Minister Theresa May made some of the same charges against the Kremlin.

Theresa May: It is seeking to weaponize information. Deploying its state-run media organizations...to sow discord in the West and undermine our institutions.

RT says that in the U.S. it has begun facing repercussions from Silicon Valley: YouTube downgraded their preferred channel status and Twitter banned RT ads from their platform. And the Justice Department has labeled RT a foreign agent, moves, says the fiery Margarita Simonyan - that fly in the face of the U.S. Constitution's Freedom of the Press.

Lesley Stahl: If you register as a foreign agent, you still are protected by the First Amendment and there is still no censorship.

Lesley Stahl: So why--

Lesley Stahl: That is true.

Lesley Stahl: So you--

Margarita Simonyan: Not me. The Russian government--

Evzio: The overdose-reversal drug with a $4000+ price tag

What's in the heads of heroes?