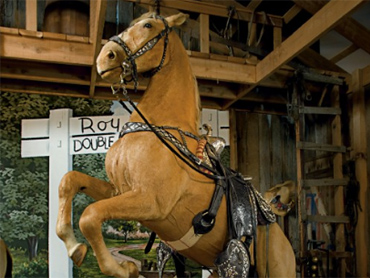 Trigger has a new home - as do numerous items once owned by Western stars Roy Rogers and Dale Evans.

They were put up for auction yesterday at Christie's in New York, with an auctioneer calling it the "most colorful, emotional and sentimental" sale she's experienced in her 20 years with the firm.

The hall was packed, with many of the bidders wearing Western attire and cowboy boots. There were even some tears.

The items were from the now-closed Roy Rogers and Dale Evans Museum in Branson, Mo. They fetched more than expected, including Rogers' stuffed horse Trigger, which went for $266,500. It was bought by a cable company in Omaha, Neb.

Rogers' 1964 Bonneville convertible, encrusted with silver dollars, sold for almost as much: $254,500.