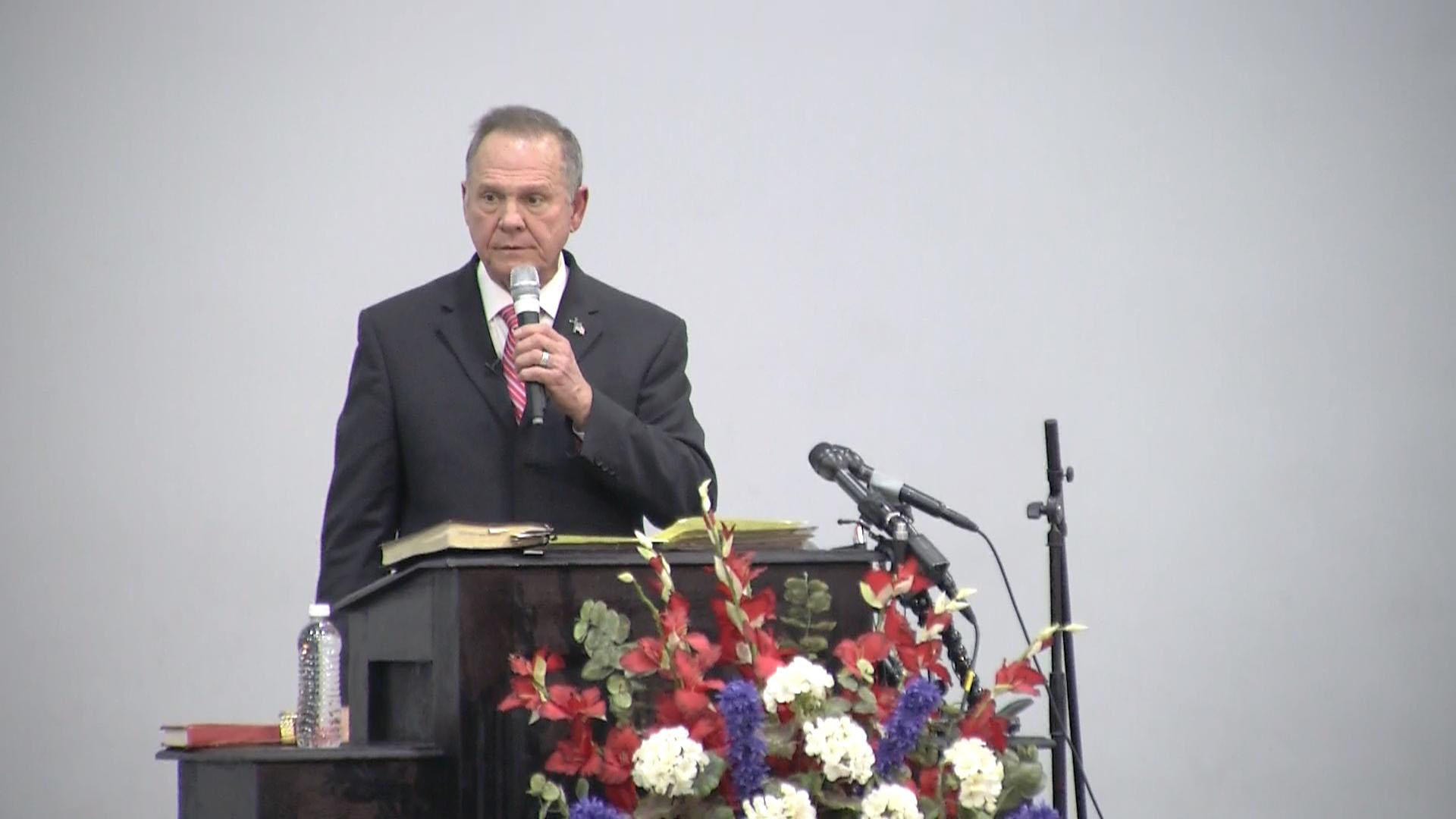 Roy Moore, Alabama's embattled GOP candidate for U.S. Senate, spoke to would-be supporters Tuesday night in his first major public appearance since five women came forward alleging he pursued them when they were teenagers and he was in his 30s.

Moore mentioned the allegations mounting against him and asked: "Why do you think I am being harassed by people pushing forth allegations in last 30 days of this election?"

He also said: "I'm the only one that can unite Democrats and Republicans, because I seem to be opposed by both. They've spent over 30 million dollars trying to take me out."

Earlier, Moore tweeted that he was looking forward to speaking Tuesday night:

An increasing number of Republicans are calling for Moore to step aside. In Washington, Republicans are dropping their support for the former Alabama Supreme Court judge, while the Republican National Committee and National Republican Senatorial Committee have pulled their names from the joint fundraising agreement with Moore's campaign.

Republicans are scrambling as they figure out what to do next, with the Dec. 12 election against Democrat Doug Jones rapidly approaching. The GOP has not not coalesced around the idea of a write-in campaign, while NRSC Chairman Sen. Cory Gardner, R-Colorado, has said the Senate should expel Moore if he is elected. Retiring Sen. Jeff Flake, R-Arizona, said Monday that if he were in Alabama, he would "run to the polling place" to vote for the Democrat.

Moore, meanwhile, is not backing down. He has decried the allegations as fake news, and an "InsideHitJob."

Moore has denied the allegations, most extensively in a radio interview with conservative host Sean Hannity on Friday, but he has left some aspects of the accusations open for further questioning. When Hannity asked whether Moore would have dated teens when he was in his 30s, Moore said, "No, not generally," also saying he always asked permission from a girl's mother before dating her.

Follow along below with live updates of Moore's Tuesday night appearance (all times ET):

Moore asks that God bless the people and state of Alabama.

Moore says he will bring the truth of God to the U.S. capitol.

9:38 p.m.: Moore questions allegations and why he's being harassed; says establishment is 1 team

More asks: "Why do you think I am being harassed by people pushing forth allegations in last 30 days of this election?"

"That's all the press focuses about," Moore says. He says he wants to focus on the issues ... where this country is going and turning back to God ... and the battles young people are facing, especially the spiritual battle.

9:32 p.m.: Moore addresses video that was shown moments ago

Moore recounted when he was on video and asked if he would acknowledge God; the government will not give us rights, he says, but God can. "We need to go back to the relevance of knowing God," Moore says.

Moore preaches about importance of not lying.

9:26 p.m.: Moore says we need to recognize God in this country

He mentions the beautiful, young choir at the church. He says there's a real battle going on and says that people should recognize God in America.

Moore is running for state Senate and he says there are people trying to prevent him from running for the Senate seat.

"Obviously, I have made a few people mad," Moore said. "I am the only one who can unite Democrats and Republicans because I seem to be opposed by both. They've spent over $30 million dollars trying to take me out. They've done everything they could and now they are together to try and keep me from going to Washington and why?"

Moore thanks all the preachers who gave words of encouragement Tuesday night. He says he didn't come to the church with a planned speech, but  and mentions he's running for state Senate.

Pastor says he endorses Moore and that Moore has paid a lot of personal cost for all of his accomplishments. "He is a fighter and champion for right," the pastor says.

A video shows Roy Moore from "humble beginnings" about his upbringing and his rise as a judge.

Moore is seen with his wife Kayla in Jackson, Alabama, entering the Walker Springs Road Baptist Church to a standing ovation.

Church service continues as preacher takes the podium after numerous hymns and a couple prayers.

Church prayer calls out Ray Moore as he faces sexual misconduct allegations and calls him a man who will "stand the test of time."

Media at the event show that Moore is in the crowd with his wife.

Choir performs and worshippers are welcomed.