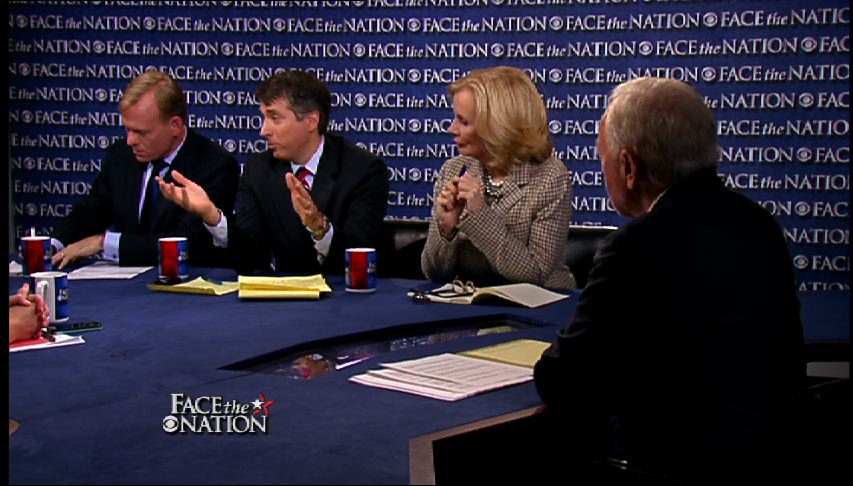 On CBS' "Face the Nation" a roundtable of political analysts agreed that the election winner is impossible to call because of the closeness of the race, and because the outcome is likely not going to be a landslide, the winner will not be able to govern with a mandate.

"The question to me is...can the winner govern, do the grand bargain and do the other things to unite this country?" political analyst David Gergen asked. "I don't think [the] winner is going to have a clear mandate. We're really going to have a country that remains bitterly and closely divided and it's tough to govern."

"[I]f he wins in these circumstances, a very narrow victory, probably having run this kind of [negative] campaign, Republicans aren't going to be more pliable. They're going to be less so," conservative columnist Rich Lowry added.

Democratic consultant Dee Dee Myers said part of the reason is the country is so politically divided is because only the political landscape has gotten so much smaller. "The battleground has shrunk to this handful of contested battleground states," Myers said. "All the principles on all sides are in a handful of states, and it makes, by definition, the race much more divisive. You have to drive a wedge when it's a 50-50 race. You can't come up with a broad national message that creates a mandate for governing. The process precludes it."

"People are more partisan," CBS News Political Director John Dickerson added. "In states they're targeted and whipped up along partisan lines. It's so close in these states because you have the left and right going to their parties and there aren't just that many undecided voters left over because they're either turned off and not participate ago the vast majority of people are not participating, and the ones that are participating that are undecided, are still small."

As for the status of the race, Gergen said, "I don't think it's too close to call. I think it's impossible to call." He added that the polls show the president with a slight advantage in battleground states but that the polls are also within the margin of error. "If you go on the ground, I was in Ohio, you hear a different story than what you hear on the polls, you hear a lot of enthusiasm on the part of Republicans. They think they can take this."

"There's a passion gap among the Republicans and Democrats," conservative columnist Peggy Noonan said. "The Romney people in the past six weeks have gone from I am anti-Obama...to I like Romney. They have become very pro-Romney."

"[B]ecause he was president, [he] was the man of the moment for those late-deciding voters who hadn't been paying attention to the race," Dickerson said.

"[B]ut one thing I think is probably clearly true and that is the fact of the storm took the subject matter of Mitt Romney's closing statements, the end of his campaign, his big arguments sort of snuffed that out a little bit for a few days," Noonan said.

"There's a reason why of the 10 incumbents who have sought office again since World War II, seven have won. Powers go with the presidency and the moment [he can] act presidential -- and I think he did. I think he handled it very well. You get a bump out of this," Gergen added.