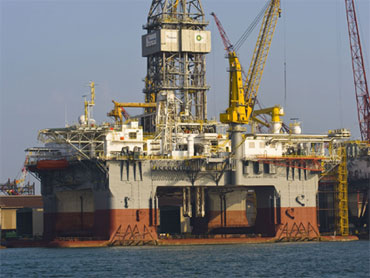 BP says the rig drilling the relief well that's the best hope of stopping the Gulf oil spill has made it within about 20 feet horizontally of the blown-out well that's gushing crude.

BP Senior Vice President Kent Wells said Monday that the rig is going to drill an additional 900 feet down before crews cut in sideways and start pumping in heavy mud to try to stop the flow from the damaged well. It's currently about 16,770 feet down.

Wells says BP is moving extremely cautiously to make sure everything is lined up correctly and the relief well is still on target to be finished by early August. A second well is being drilled as a backup.

Wells says the company has a high degree of confidence in the relief wells.

Meanwhile, BP said Monday that the costs for capping and cleaning up the massive spill have reached $2.65 billion, but the company denied reports out of Russia that CEO Tony Hayward is resigning.

The company's expenses climbed $100 million per day over the weekend, according to an SEC filing Monday, as engineers eyed a tropical storm heading toward Mexico that was expected to miss the oil spill area but could still generate disruptive waves and winds.

It was a rocky start to the week after BP PLC stock fall 6 percent Friday in New York to a 14-year low. BP has lost more than $100 billion in market value since the deep-water drilling platform it was operating blew up April 20, killing 11 workers and starting the massive leak that has fouled the coastline in four states.

British-based BP rushed to deny the report by Russia's state RIA Novosti news agency that a senior Russian Cabinet official had said Hayward was expected to resign as chief executive.

It quoted Deputy Prime Minister Igor Sechin, before a Moscow meeting with Hayward on Monday, as saying that Hayward would introduce his successor.

"Hayward is leaving his post, he will introduce his successor," Sechin was quoted as saying by RIA Novosti.

"They are mistaken," U.S.-based BP spokesman Mark Proegler said of the Russian report.

After the meeting, a spokesman for Sechin said, "The issue of Hayward's resignation wasn't discussed." Spokesman Rustam Kozharov said topics included the Russian joint venture TNK-BP, which accounts for about a quarter of BP's reserves and production.

BP shares gave up some ground in London after the Hayward report emerged from Russia. But they were still up a fraction at $4.61. BP's U.S. shares gained about 2.5 percent.

"I'm sure there has been a misunderstanding. Hayward's resignation at this time and in this place lacks logic," he said.

"It would make sense that Hayward would finish his job tackling with the oil spill and step down afterwards so that the new CEO wouldn't have his burden on his shoulders."

In a filing Monday to U.S. securities regulators, BP said the cost of its response to the Gulf of Mexico oil spill had reached about $2.65 billion, up from $2.35 billion as of Friday. The costs include spill response, containment, relief well drilling, grants to Gulf states, claims paid, and federal costs.

BP says the figure does not include a $20 billion fund for Gulf damages it created this month.

In the Gulf, Tropical Storm Alex was forecast to strengthen and possibly become a hurricane Monday or Tuesday as its center crossed open water from Yucatan to Mexico's northeastern coast.

That track is far from the area of the oil spill off Louisiana's coast. But the first tropical storm of what is expected to be an active Atlantic hurricane season will still generate waves up to 15 feet high and winds of 20 to 30 mph on its outer edges that could pound the oil spill area, said Stacy Stewart, senior hurricane specialist at the National Hurricane Center in Miami.

"That could exacerbate the problem there in terms of pushing oil further inland and also perhaps hindering operations," Stewart said.