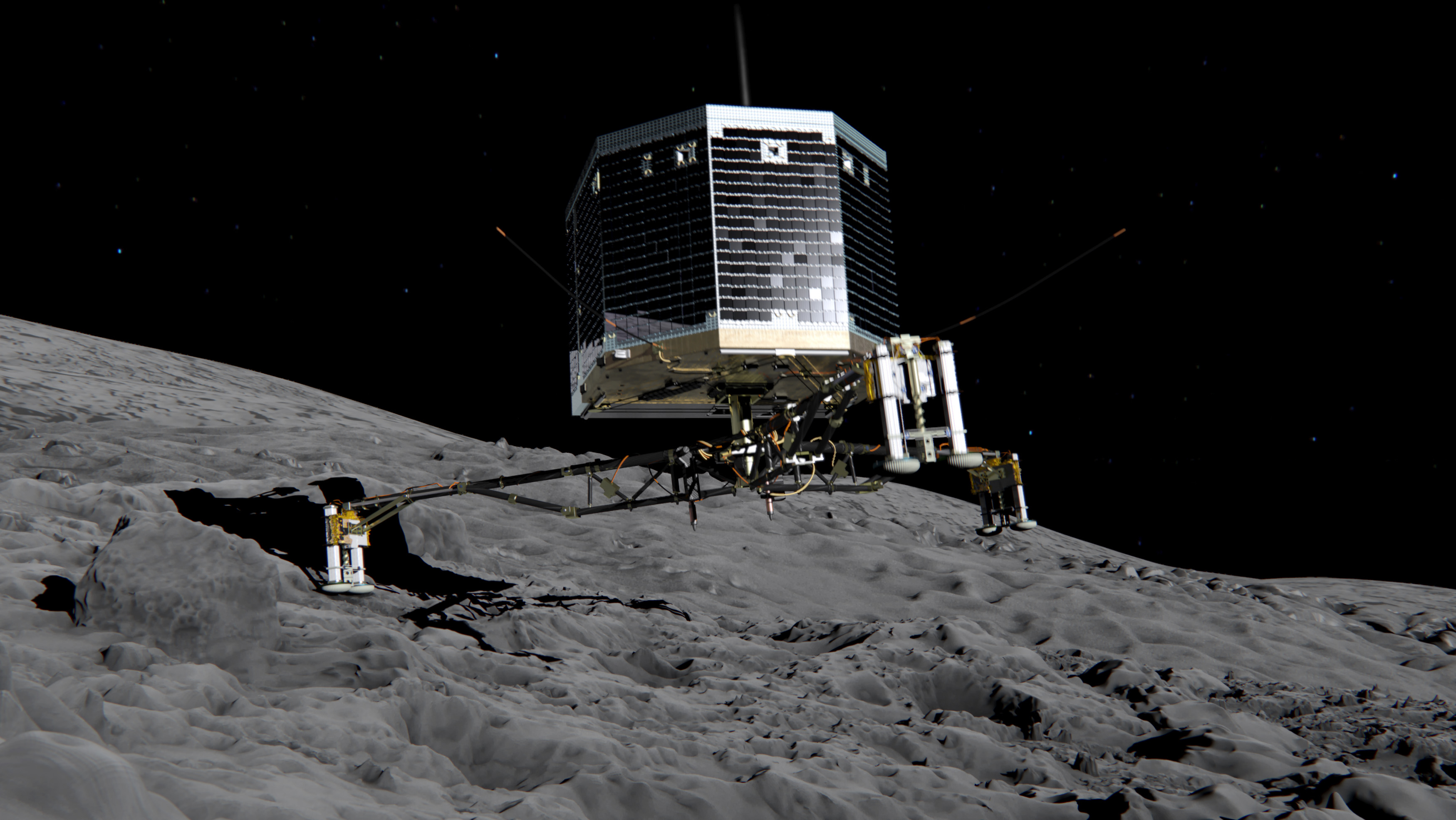 In a moment of extraordinary drama 317 million miles from Earth, a small robotic lander released from the European Space Agency's $1.7 billion Rosetta probe touched down on Comet 67P/Churyumov-Gerasimenko Wednesday after a seven-hour descent, gently colliding with the slowly tumbling, bizarre-looking relic and presumably sticking to the surface in the body's feeble gravity.

The Philae lander hit the two-and-a-half-mile-wide comet at a walking pace, a bit more than 2 mph. A cold gas thruster was programmed to fire at touchdown to help push the lander down while two harpoons shot into the soil to anchor the spacecraft in place. The harpoons and ice screws on the bottom of each landing leg were needed to help keep the spacecraft from bouncing off in a gravity field 100,000 times weaker than Earth's.

But the thruster system did not pressurize during overnight activation and engineers confirmed it did not fire during landing. In addition, the telemetry did not indicate whether the harpoons fired as planned to dig into the surface. Engineers did not immediately know whether Philae was, in fact, firmly down on the comet's surface and if so, whether it would stay where it was in the feeble gravity.

But telemetry from the lander indicated it was healthy and given that Rosetta was still receiving the signals after Philae's touchdown, engineers were hopeful the lander was, in fact, still in place on the comet.

"Philae is doing great," a lander engineer told ESA dignitaries and a global television audience. "We've seen the touchdown signal, this means that we landed on the comet, we touched the surface."

The landing gear legs depressed less than expected as they absorbed the impact at touchdown, he said, indicating "landing was very soft, very gentle."

"What we also see from our telemetry is the anchors did not shoot," he added. "This is causing us some concerns at the moment because without this anchoring we cannot with 100 percent certainty state that we are landed on the comet and that we're fixed on the comet. From a software point of view, from sequencing, we see that everything is proceeding nominally.

"Our big concern at the moment is if we can in some way confirm we're also standing stable on the comet and will remain there, and we are considering if we need to re-try shooting the anchors."

The lander was not equipped with a hazard avoidance system or thrusters to change its trajectory. And given the comet's vast distance from Earth, there was no way for flight controllers to actively guide the craft during final approach. From the moment of release from the Rosetta mothership, Philae was on its own, bound for a touchdown somewhere in a 1,600-foot-wide landing zone.

The overnight failure of the landing thruster raised the already high anxiety in the European Space Operations Center in Darmstadt, Germany, where flight controllers, mission managers and scientists nervously waited out the long descent and telemetry relayed through Rosetta confirming Philae's touchdown.

Technical issues aside, the team could only hope Philae would not come down on a boulder or a steep slope that might tip the lander over or send it careening back out into space.

But as it turned out, Philae's trajectory was spot on, carrying it to the surface right on time around 10:34 a.m. Telemetry confirming touchdown made it back to Earth 28 minutes later, prompting an outburst of cheers and applause as the mounting tension of the past week evaporated with welcome release.

"We can definitely confirm that the lander is on the surface," said Andrea Accomazzo, Rosetta spacecraft operations manager. He then called in Stephan Ulamec, director of the Philae landing team at the German space agency.

"We're there, and Philae is talking to us," Ulamec said. "The first thing he told us was that the harpoons have been fired and rewound and the landing gear has been moved inside, so we are sitting on the surface. ... We are on the comet!"

Another round of applause and cheers greeted the announcement, not to mention a wave of relief that one of the most complex landings ever attempted in deep space, one fraught with unknowns and a narrow margin of error, had apparently succeeded, a high-tech triumph for the European Space Agency.

But within the hour, engineers studying telemetry realized they were unable to confirm whether the harpoons fired, leaving the lander's status somewhat uncertain. Philae was expected to beam back initial pictures later in the day, which could shed light on its orientation and position.

A drill will penetrate a foot below the surface to collect pristine material for chemical analysis. Other instruments will sample the dust given off by the comet, study its internal structure and monitor how it changes as 67P moves closer to the sun. Rosetta, meanwhile, will relay Philae's data back to Earth and carry out science observations of its own using a suite of 11 cameras and other instruments. ESA hopes to operate Rosetta through the end of 2015 to characterize the comet's behavior as it approaches the sun and then begins heading back out into deep space.

Calling the Rosetta mission and Philae's landing "the start of something important," Green said "it's our destiny to move off this planet. And this is the kind of step that we must do. ESA, thank you from the bottom of my hear for a wonderful experience. And the science will be marvelous!

During Rosetta's approach earlier this year, finally gave scientists a high-resolution look at its target, revealing a bizarre body with two bulging lobes connected by a thinner neck-like region. The comet's unusual structure posed a variety of challenges for Philae's landing, ranging from towering cliffs to huge boulders strewn across a complex, tortured-looking terrain.

Like all comets, 67P/Churyumov-Gerasimenko is a frozen remnant of the primordial material used to form the sun and planets 4.6 billion years ago. Comets may have delivered water to Earth and along with it, organic compounds that may have played a role in the development of life.

A major unknown throughout the approach phase was the nature of the eventual landing site. Comet 67P/Churyumov-Gerasimenko is a much more challenging body than anyone anticipated when Rosetta was launched in 2004 and engineers had no guarantees that Philae would avoid landing on a boulder or a steep slope that might prevent a successful touchdown.

Top translation apps to try on your next trip
William Harwood