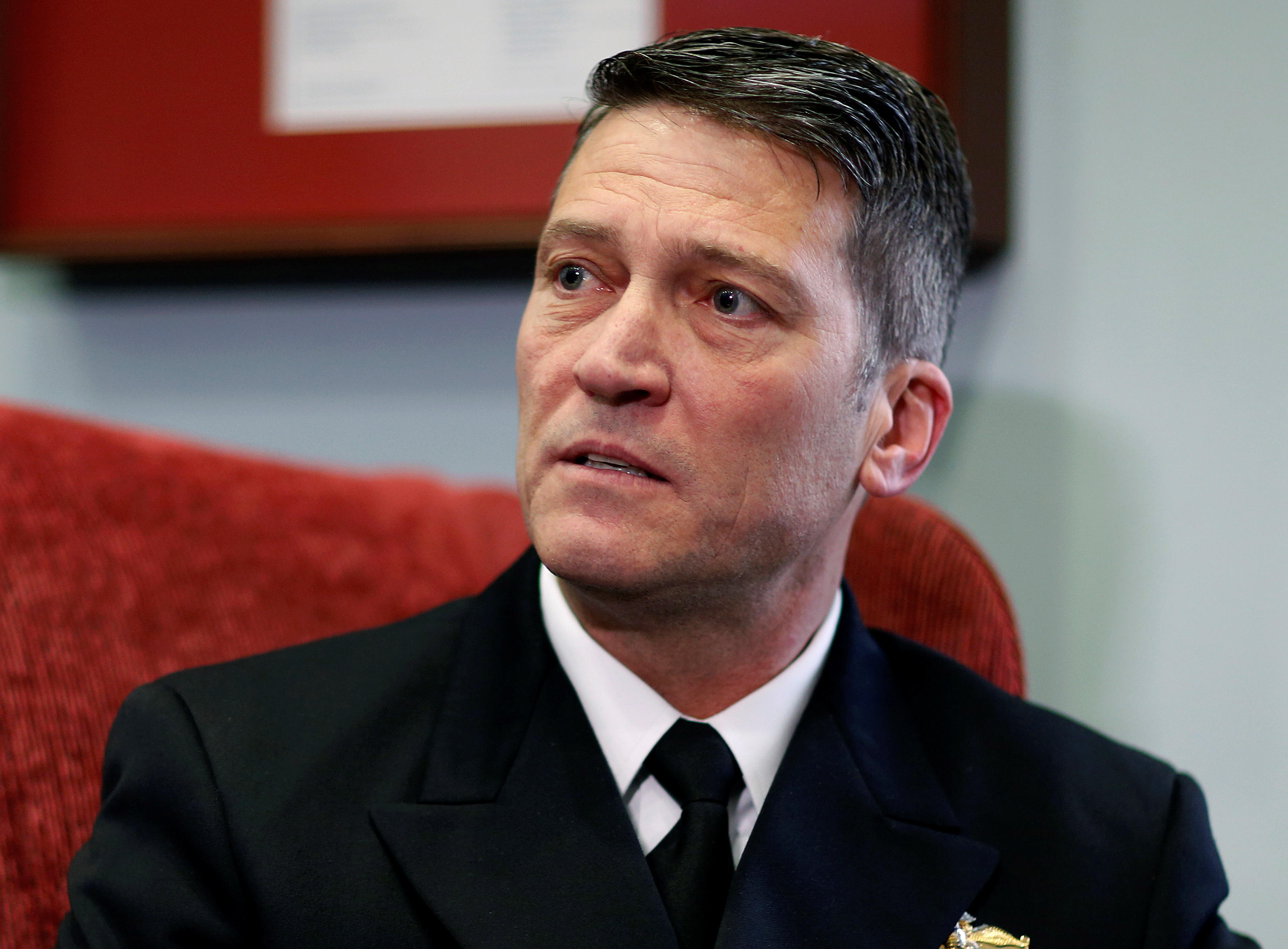 Rear Admiral Ronny Jackson, the White House physician and President Trump's choice to be the next Veterans Affairs secretary, withdrew his nomination for the appointment on Thursday amid questions about his behavior.

Jackson announced his withdrawal in a statement:

One of the greatest honors in my life has been to serve this country as a physician both on the battlefield with United States Marines and as proud member of the United States Navy.

It has been my distinct honor and privilege to work at the White House and serve three Presidents.

Going into this process, I expected tough questions about how to best care for our veterans, but I did not expect to have to dignify baseless and anonymous attacks on my character and integrity.

The allegations against me are completely false and fabricated. If they had any merit, I would not have been selected, promoted and entrusted to serve in such a sensitive and important role as physician to three presidents over the past 12 years.

In my role as a doctor, I have tirelessly worked to provide excellent care for all my patients. In doing so, I have always adhered to the highest ethical standards.

Unfortunately, because of how Washington works, these false allegations have become a distraction for this President and the important issue we must be addressing – how we give the best care to our nation's heroes.

While I will forever be grateful for the trust and confidence President Trump has placed in me by giving me this opportunity, I am regretfully withdrawing my nomination to be Secretary for the Department of Veterans Affairs.

I am proud of my service to the country and will always be committed to the brave veterans who volunteer to defend our freedoms.

Jackson had met with White House officials Wednesday evening, a senior official says, according to CBS News' Major Garrett, but did not discuss withdrawing his nomination. Jackson did talk about being fatigued by the process and frustrated with the unverified allegations against him that are driving the narrative about him before his confirmation hearing.

Jackson was due to begin his confirmation hearings on Wednesday. But Sens. Jon Tester, D-Montana, and Johnny Isakson, R-Georgia, announced Tuesday that they would delay the hearing.

"The Senate Committee on Veterans' Affairs is postponing the hearing to consider the nominee to be secretary of the U.S. Department of Veterans Affairs in light of new information presented to the committee," Isakson and Tester, who are respectively the top Republican and Democrat on the committee, said in a joint statement.

After reports surfaced Monday evening that there were serious complaints about Jackson's behavior, the White House issued several statements in support of their nominee. While Mr. Trump later suggested on Tuesday that Jackson would be better off withdrawing his name from nomination, he said the decision was "totally his," and he "would stand behind him."

Sources familiar with the claims against Jackson say he faced multiple allegations of creating a "hostile work environment." The accusations include "excessive drinking on the job, improperly dispensing meds," said one of the people familiar, who was granted anonymity to speak frankly about the situation. The other people familiar with the stories also confirmed those details.

The allegations against Jackson stem from 20 active duty and former military members, Tester told NPR on Tuesday. Tester said these allegations began to arise as people who knew Jackson came forward, not because he and his staff sought them out.

Later, Tester spoke with CNN's Anderson Cooper about the allegations, among them, that Jackson loosely dispensed sleep-related prescription medications ambien and provigil. "In the White House," Tester said, "they call him the 'candy man.'"

White House Press Secretary Sarah Huckabee Sanders also defended Jackson, saying the nominee had gone through a "thorough vetting process" that included four background investigations, the most recent taking place during the Trump administration. Sanders said at no point in time did the allegations of drinking on the job or overprescribing medication raised.

Speaking to Fox News' "Fox and Friends" on Thursday, shortly after Jackson announced his withdrawal, Mr. Trump continued to stand by Jackson, saying he would have done a great job," but that he saw where his nomination process was going.

"These are false accusations they're trying to destroy a man," said Mr. Trump. The president also warned that Sen. Tester would have a "big price to pay" for his comments on Jackson, saying it's "going to cause him a lot of problems in his state."

"The kind of things he was saying, there's no proof of this, he's got a perfect record, unblemished," said Mr. Trump of Jackson. "For him to be doing to this to this man and his family, Jon Tester has to have a big price to pay in Montana."

Tester released a statement on Jackson's withdrawal on Thursday, urging Congress to continue its investigation into the White House Medical Unit.

"I want to thank the servicemembers who bravely spoke out over the past week.  It is my Constitutional responsibility to make sure the veterans of this nation get a strong, thoroughly vetted leader who will fight for them. The next Secretary must have a commitment to reform a strained health care system and a willingness to stand up to special interests who want to privatize the VA. My sleeves are rolled up and ready to work with Chairman Isakson to vet and confirm a Secretary who is fit to run the VA."

Jackson, a decorated Naval officer who was set to replace fired VA secretary David Shulkin, was best known for a January press conference in which he gave the president a clean bill of health. Before the allegations against him surfaced, some questioned whether Jackson had the experience necessary to run a bureaucracy like the VA.

Despite his withdrawal, according to Sanders, Jackson is back at work in his role as White House doctor.

As for his plans for his next nominee, Mr. Trump told Fox that he has an idea for a replacement at the VA, adding it will likely be "someone with political capability."