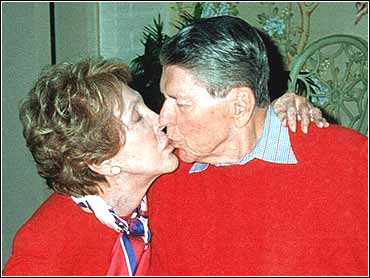 As Ronald and Nancy Reagan celebrate their 50th wedding anniversary Monday, they are still inseparable after years together in Hollywood, the White House and finally, in the shadows of Alzheimer's disease.

"When you think about our lives, it's been extraordinary, the different paths we've gone on that we never intended to go on," Mrs. Reagan said in an interview broadcast on NBC's "Today" show. "It's really wonderful."

In a statement Friday, she said: "I've been asked over and over again if there is a secret to staying married for this long and I'd have to say there isn't one. Marriage is never 50-50. One of you is always giving more, always compromising. And we've both done our share of compromising in these 50 years."

She said it was difficult to pick out one moment that stood out in their half-century together. "We had a great life, a great life, and I was very blessed to find him," she said in the "Today" show interview.

The couple was spending their anniversary together in their Bel-Air home with a cake, likely his favorite chocolate. Mrs. Reagan said she would be celebrating on the "inside."

"There's no way to celebrate," she said. "But I can celebrate the fact that's we had 50 years, which still, I can't believe it."

This year, Mrs. Reagan laments, she will miss the traditional anniversary letter from her now-91-year-old husband.

"(It's) one of the days that I most looked forward to every year, since I always knew I would receive a special letter from Ronnie," she writes in the paperback edition of the book "I Love You, Ronnie," being released Monday.

The book, first released in fall 2000, is a compilation of his letters to her that exposed the depth of passion for Reagan's beloved wife.

"He wrote me letters all the time, including on ordinary days and sometimes more than once a day, but our anniversary was always special," Mrs. Reagan said.

The extraordinary letters continued for more than 40 years.

"They are a kind of lifeline — preserving the past, Ronnie's wonderful voice and humor, his character, and his special way of seeing things and expressing himself. As they bring back Ronnie in his own words, they help me go on into the future," Mrs. Reagan said.

The former first lady, who turns 81 on July 6, has been chief caregiver for the former president as Alzheimer's has taken its toll. Reagan has rarely been seen in public since his poignant 1994 letter announcing he has the memory-sapping disease.

The couple recited their wedding vows March 4, 1952, at The Little Brown Church in the Valley, a small chapel near Ventura Boulevard in the Studio City area. Actor William Holden was best man, and his wife, Ardis Holden, was the maid of honor.

The Holdens held a post-wedding dinner in their home, then the newlyweds drove 50 miles in the Gipper's new convertible to Riverside's landmark Mission Inn for their wedding night. It was then on to Arizona for a few days.

On the way back to Los Angeles, fierce wind shredded the convertible top and the brief honeymoon ended with Mrs. Reagan on her knees in the front seat holding down the top.

"We had to stop every once in a while so I could warm my hands," Mrs. Reagan wrote later.

The couple's golden wedding anniversary is also being celebrated at the Ronald Reagan Presidential Library in Simi Valley with a room dedicated to the half-century love affair. There are giant photographs of them dancing, laughing and embracing.

The centerpiece is the booth from their favorite haunt, Chasen's restaurant. It's where the Gipper proposed to Nancy Davis in January 1952.

Mrs. Reagan got a peek on the eve of the couple's 50th.

"Oh, my!" she said as she entered the room, memories sweeping across her face with a smile as she spied the red leather booth where she was swept off her feet by the dashing future president.

She paused to read anniversary cards and letters written in better days, loving missives beginning with "My darling wife," "My darling First Lady," "Dear First Lady" and "Mommie darling." In one he wrote, "Glad we're roommates," and all were signed, "Your husband."

Americans are fascinated by such an everlasting relationship, popular culture psychologist Dr. Joyce Brothers said. There is something "so poetic and royal" about the Reagans, she said.

"Those who marry for love have extremely successful marriages. And more important to older marriages is being able to hold somebody tenderly. There's somebody there for them, and that's especially true now with the Reagans."

Whenever asked about the nation's 40th chief executive, Mrs. Reagan and his chief of staff Joanne Drake say he's doing fine and leave it at that.