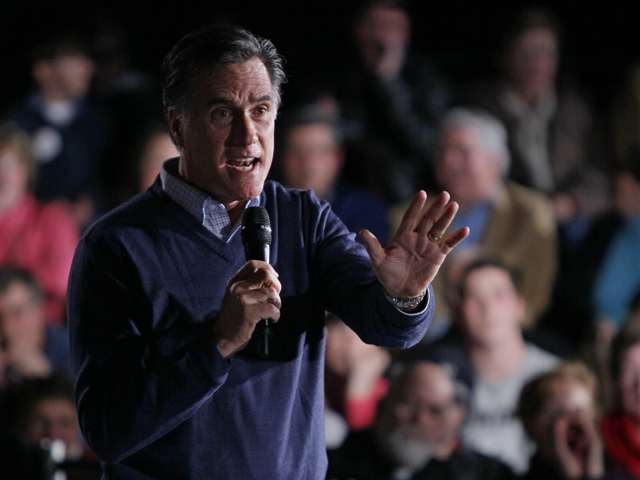 PORTLAND, Maine - Drawing on his by now well-honed debate skills, Republican presidential front-runner Mitt Romney on Friday deftly put down an aggressive attack by a few hostile members of a town hall audience, who challenged him repeatedly on issues ranging from his overseas investments to his support for hydrofracking.

It was a rare bit of rhetorical chaos at a Romney event, which are typically as subdued as the candidate tends to be. But the former Massachusetts governor defended himself in a calm and concise manner, winning thunderous applause from the audience of about 300 people at several points.

Tensions rose during the second question of the hour-long event. "Do you think it's patriotic of you to stash money away in Cayman Islands?" asked a woman, who was greeted by groans of disapproval.

"That's OK, it's a good question, come on!" Romney said. "I've got to take some shots now and then or it won't be interesting."

The multi-millionaire, who once ran a private equity firm, said he put his money in a blind trust and does not control investment decisions. "You might think you put your money somewhere else you don't pay U.S. taxes? Of course you do," he said. "I pay all the taxes I'm required to pay under the law, and by the way, not a dollar more."

Shortly afterward, Romney's remarks were interrupted by Steve Demetriou, who described himself as an independent voter from the Portland area. Demetriou criticized mortgage giants Fannie Mae and Freddie Mac for the collapse of the housing market and also Romney's criticism of the Dodd-Frank banking law that tightened regulations on financial firms.

"It's my turn to speak, you've had your turn," Romney said. "A lot of people were responsible for what happened to the housing market," he said heatedly, and asserted that the Dodd-Frank law did little to curb abuses by the big banks. "Your friends the little banks are hurting. The ones that you're unhappy with, the big banks, they're smiling from ear to ear with Dodd-Frank," Romney said.

As Romney launched into a discussion of his energy policy, a group of women began heckling him about his support for hydrofracking, a method of extracting natural gas from rock with pressurized water that has been criticized by environmentalists as a source of water pollution.

Romney cited the widespread use of the technique and said he hasn't seen evidence of negative effects. At one point, Romney implored the shouters not to get angry, a tactic he once used on rival Rick Santorum at a debate.

The tension may have been spurred in part by the location of the town hall. Maine, though it has a Republican governor and Republican senators, has voted for the Democratic candidate in the past four presidential elections and the hecklers seemed to be liberal-leaning voters. Members of the crowd booed the protestors and yelled at them to "Shut up!"

At the event, Romney also waded into the political fray over the decision by the Obama administration today to require insurers, rather than private employers, to pay for coverage of contraception. The move reversed an earlier decision that would have required religious-affiliated organizations, such as Catholic hospitals, to provide the coverage, prompting an outcry from across the political spectrum.

"Today he did the classic Obama retreat all right, and what I mean by that is, it wasn't a retreat at all. It's another deception," Romney said, arguing that that religious organizations still will have to pay for contraception after insurance companies pass the costs along to employers.

"Companies consist of people, and someone has to pay -- the owners, the employees or the customers, and they pass those costs on to the customers," he said.