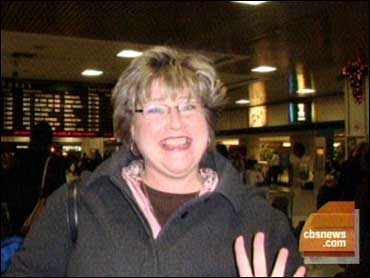 Shock and sadness hang heavily over friends and family members of victims of the crash of Flight 3407. But memories of the 50 who perished live on, and their stories are being told.

The Continental Connection flight from Newark, N.J., went down in light snow and fog late Thursday night and slammed into a house in the Buffalo, N.Y. suburb of Clarence.

Among those who died was Mary Pettys, by all accounts a remarkable woman who touched everyone around her, and whose death leaves a giant void for her nine siblings, widowed father, and fiancé.

Pettys, the oldest of the ten brothers and sisters, was 51, a software manager for a healthcare company, and was returning to Buffalo from a business trip to New York.

When their mother died two years ago, Mary stepped in and basically became the matriarch, the one they all turned to, and she gave back, becoming "the rock" of the family, according to several siblings. She was the sister who did everything for everyone without giving it a second thought, putting everyone's needs before her own.

But Mary, a lifelong Buffalo area resident, was finally enjoying true love, and recently got engaged to Bill Adamski, and was planning her first wedding for this spring.

Her relatives called her Mary Belle, the "belle" meaning "beautiful." They're devastated, and they want the world to know about the life she lived, and the lives she impacted.

So, they spoke to co-anchor Erica Hill on The Early Show Saturday Edition from the home in Hamburg, N.Y. where they've all gathered in grief.

Adamski observed that Mary "was just such a special person that everybody that met her fell in love with her. You had no other choice in the world. She made me the happiest man. I'm devastated." He had to stop, sobbing.

Mary's father, Howie Pettys, said it really hit him that she's gone when she wasn't there to bring him his coffee, as she'd been doing every morning ever since his wife died.

She was, he said simply, "quite a girl."

But it wasn't all tears.

Pasha said "there's a million" stories of Mary bringing smiles to peoples' faces. "The most recent," Pasha said, "was when we were in New York City with Mary, celebrating her 50th birthday, and we were all at lunch. And, to know Mary is to love her, and the waitress came and was just so enthralled with Mary, and we were starving and just wanted her to take our order. But she was so intrigued with Mary and her looks and her personality, and noticed that she was engaged and was asking why she waited so long to get engaged. And, you know, ten minutes into the conversation, I had to say, 'Can you at least go put our order in and then come back, because we're really hungry! Mary will wait for you!' ... Love her to death, and we'll miss her."