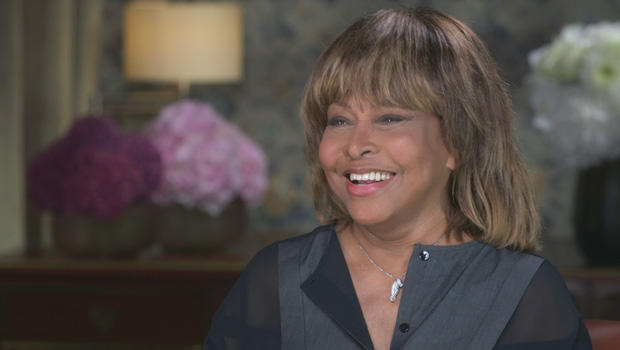 It was her voice and her moves that gave Tina Turner a five-decade career as one of the biggest stars in rock music, selling more than 200 million records.  And the tale of the suffering and triumph of her life off-stage, famously chronicled in the Oscar-nominated film "What's Love Got To Do With It," has endeared her to millions.

Turner, 79, is now a citizen of Switzerland. She recently published a memoir, "My Love Story" (Atria Books, an imprint of Simon & Schuster, a division of CBS), a book she admits she had to be convinced to write.

"I said, 'Okay, I'll do the book because there's still a lot to be said,'" Turner told CBS News' Gayle King, at her home overlooking Lake Zurich. "So then we started working on it. And it was a little boring because you're always talking about yourself and what you did."

"Tina, stop it. There's nothing boring about you. Nothing," said King.

She says the 16-year age difference did not bother her at all - and she's not bothered about coyness. She told the story of saying, "'When you get to California, I want you to make love to me.' Because I did!" she laughed.

"But Tina, who says that to somebody?" asked King.

"Well, you say it if you feel it!  Now, you're not gonna get it otherwise. But that's what I wanted!"

They fell in love, and finally tied the knot six years ago. It was, she said, "the first time that I got married, as far as I was concerned. When Ike asked me to marry him, I knew it was for a reason. But I had to say yes … or it was gonna be a fight. And so then, when we drove to marry, that wasn't my idea of my wedding."

That first wedding, and that first husband, Ike Turner (who died in 2007), are still things that Tina Turner is trying to reconcile.

King asked, "You spend time in the book actually thinking about Ike. Why do you think you found yourself thinking about him? Someone who caused you so much pain?"

Tina was born Anna Mae Bullock in Nutbush, Tennessee, a tomboy, she says, from a broken home.  When she first laid eyes on the charismatic Ike Turner, a popular singer in a St. Louis nightclub, her reaction was mixed. "I thought he was the ugliest person I'd ever seen. I've never seen anybody that skinny!" Tina said.

"But he had a presence. And then I watched him when he got on stage and he started. I thought, 'Oh, wow, I wanna sing with that band!'"

Soon she had her chance, but when a song she recorded with Ike caught the eye of a label executive, that was the end of Anna Mae.

"He just came home from the record company. He said, 'Here's the record.' And I said, 'Who's Tina?' He said, 'You're Tina!' And I said, "Tina? Tina Turner?' It was really hard to say in the beginning.

"That is when he took over the money, the name, the whole control."

To watch the Ike & Tina Turner Revue perform "Proud Mary" click on the video player below:

The Ike & Tina Turner Revue became one of the most successful acts of the late '60s. Tina says she faced competition from other big female singers. "But I was the only one that danced. And I remember Little Richard said, 'Tina dances, you know, it's hard for us to compete with her!' Because I always did the Twist, I always danced onstage."

"But you had that voice, too," said King.

"I had the strange voice that most girl singers didn't have."

"How does your voice sound to you?"

"Deep, like now, and even it goes deeper," she said.

"Do you like your voice, Tina? Do you think you have a good voice?"

"You know, in the beginning I didn't. I thought it was kind of ugly because it didn't sound like Diana Ross. But then afterwards I thought, 'Yeah, it sounds like the guys.'"

But the success of the duo came at a steep price. She says Ike Turner consistently abused her. "He was cruel because he depended on me," Tina said. "He didn't like that he had had to depend on me. And I didn't want to start a fight because it was always a black eye, a broken nose, a busted lip, a rib."

King said, "It got to the point where you finally decided to fight back, something you had never done before, I mean physically you fought back."

"I felt that I've had enough, just enough, enough. Now it's time to go out the door. I had nothing. I had absolutely nothing. 36 cents, that was all."

"So, here you are, you have to start over. You've had this career of Ike & Tina. Now you are Tina Turner. Are you thinking that you're going to be a success as Tina Turner at the age of close to 40?"

"I didn't think about the singing at all," Tina said. "First of all, I was thinking about where I was gonna lay my head, so to speak. And then I was just enjoying the freedom of not being in that environment."

Tina played hotels and casinos, and caught the attention of a young Australian producer, Roger Davies. But when she heard a demo of another song he proposed, "What's Love Got to do With It," she turned up her nose.

At age 44, Tina Turner had her first number one single. She would go on to fill albums with hit music, and arenas with fans worldwide.

The years since her retirement have tested Turner in new ways. Her son, Craig, took his life last July.

Tina said, "I think Craig was lonely, that's what I think really got him more than anything else. I have pictures all around of him smiling, and I think I'm sensing that he's in a good place. I really do."

She has endured a stroke, intestinal cancer and kidney failure. When she needed a new kidney, her husband, Erwin, offered one of his. "And I said, 'Yes, but darling, you're young and I'm already old. And I don't mind.'  In Buddhism, you're taught that you live and you die. It's something that's accepted. And so then after Erwin said that, I said, 'Okay darling, if you're willing to give up a kidney, then fine.'"

When asked if there is anything more in life that she wants, Turner replied. "No. I have everything. When I sit at the Lake Zurich in the house that I have, I am so serene. No problems. I had a very hard life. But I didn't put blame on anything or anyone. I got through it, I lived through it with no blame. And I'm a happy person."

Taylor Swift fans, and Congress, take on Ticketmaster
Thanks for reading CBS NEWS.
Create your free account or log in
for more features.
View CBS News In
CBS News App Open
Chrome Safari Continue
Be the first to know
Get browser notifications for breaking news, live events, and exclusive reporting.