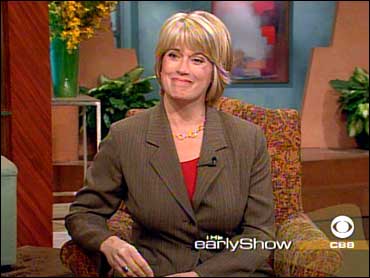 Jane Robelot co-anchored CBS This Morning, a predecessor of The Early Show, during the 1990s.

For family and health reasons, she left to start a new life in Atlanta.

Last year, Robelot received a frightening medical diagnosis. One of her heart valves was defective, a result of Graves' disease, and would likely kill her eventually if it wasn't repaired.

Three weeks ago, she invited The Early Show to watch a promising new type of robotic surgery that turned out to be the answer to her prayers, and CBS News Correspondent Mark Strassmann was .

Thursday, looking and feeling healthy and chipper, Robelot stopped by The Early Show to talk about it all.

She told Strassmann, "If I did nothing, my heart would have to work so hard, because this one valve is inefficient, that I would end up with congenital heart failure. I mean, it would eventually kill me."

Cameras captured the moment when Robelot, in her surgical gown, tightly hugged husband Mario de Carvalho prior to the surgery. "I love you, I love you so much," an emotional de Carvalho said during the long embrace, as Robelot sighed.

"There were times when Mario would wake me up at night, because he could feel my heart beating on the mattress," Robelot recalled for Strassmann.

Told she needed a heart operation at 44, Robelot started researching options and learned about cutting-edge surgery without a big cut, using tiny instruments guided by a robot.

Last year, Strassmann reports, the incidence of robotic surgery rose more than 50 percent, with most of the increase in prostate procedures. Advocates say it has great promise but, as in all operations, there's risk too.

The night before her operation, Robelot carried her son, George, down the hall, to put him in bed for nighttime prayers. She huddled closely with him.

"He's only seven" Robelot told Strassmann. "He needs his mom. I want to be there with him when he has his first girlfriend."

"Dear Jesus," George said, "please help Mommy get through her heart surgery tomorrow."De Carvalho, a CBS News producer, admitted to Strassmann he was worried about the next day's events: "Of course I am. They're gonna stop her heart. They're essentially gonna kill her for quite some time … and fix it and bring you back to life."

As Robelot was being wheeled into the OR, he gave Robelot another kiss, and implored, "Go get 'em, girl!"

At Atlanta's Saint Joseph's Hospital, one of the leading hospitals to use new, $1 million robotic equipment made by Intuitive Surgical for heart operations, David Langford, Dr. Douglas Murphy and their team, stood ready.

"The No. 1 priority is keep you alive," Murphy said to Strassmann. "No. 2 priority is repair that valve and stop the leak, and the third is do it through the smallest incision."

Fixing a valve with traditional open heart surgery involves cutting through the breastbone to reach the heart, and involves months of recovery, Strassmann explains.

Robelot's highly unusual surgery is minimally invasive, with a robotic assist. Doctors make five incisions, all less than three-quarters of an inch long, on her right side. They serve as portals for robotic surgical instruments guided by a tiny 3-D camera.

And the biggest advantage to robotic surgery is that by entering Robelot's body from the side, surgeons actually get a better view of her heart's mitral valve, the one endangering her life.

Murphy inserted the robotic arms into Robelot's chest and used "a whole bunch of interchangeable instruments with all different tips on them, and it just slides in here."

Robelot's heart was stopped. A heart-lung machine kept her alive. Four hands, two robotic, two human, worked on her heart all at once, fix its leaky valve.

At a robotic console, a 3-D computer screen and hand controls enable the surgeons to see and move tiny robotic right and left hands with no hand tremor.

It seemed incredible: a heart repaired with string stitched by a robot.

He said it was "stunning to watch. Five hours of surgery flew by in a heartbeat."

And, Strassmann added, Robelot and her family could now put their hearts at ease.

Robelot beamed at not having a scar, telling co-anchor Rene Syler, "As a 45-year-old woman, if I can live without that up the middle of my chest.

"It takes so much longer for bones to heal, and that sternum to heal. And they didn't even have to move any bones, as you can see."

Robelot said, "Even though I knew surgery was a possibility, hearing (I need it) from my cardiologist was something.

"I got to the parking garage before I called Mario and I thought, 'Well, I either am a woman of faith, or I'm not a woman of faith. This is where the rubber meets the road.' Part of me wanted to just put my head on the steering wheel and cry and say, I don't want to do this. But I have so many friends who are dealing with so many more problems than that. And I said, 'This is where faith comes in. I have to believe that whatever happens, I'm in God's hands.' "

Robelot said she actually learned of the robotic surgery option from a surgeon from whom she'd sought a second opinion who, it turned out, was Langford.

Asked by Syler if she had any fear or trepidation about having the surgery, Robelot responded, "None. None, Rene. And I think most of that is because of my faith. I knew that, whatever the outcome, God is still in control, and secondly, when you have the greatest doctors at one of the finest hospitals in the world, your life is in their hands and it's secure."

As the interview ended, Robelot happily called it "old home week" for her, being back in the building from which she did the morning news for so long.

'This Was Our Miracle'