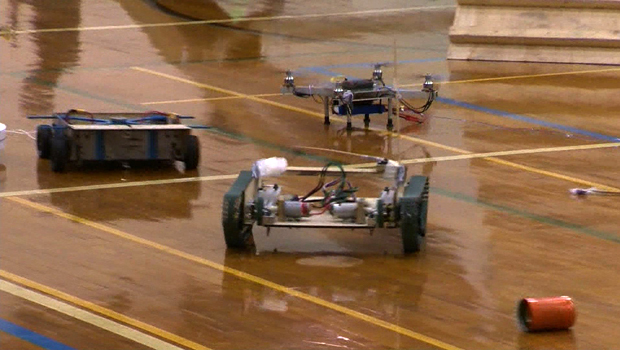 PASADENA, Calif. -- Robots battled on land and in the air at one of California's most prestigious learning institutions Tuesday.

Six teams of mechanical engineering students put their creations to the test for the competition, in which robotic vehicles must climb or fly and mount an aerial assault with the goal of getting empty soup cans onto an elevated 5-foot target platform - and to prevent or obstruct the other team's robot from reaching the platform.

Sean Keenan and Brandon Robinson, who are members of one of this year's six teams, said they're confident at least one of their robots - a quadcopter and a two-wheeled ground vehicle - would emerge victorious in the "Raiders of the Lost Can" battle.

"You start out with a design, and you find out that parts of it don't work, it's not getting up the ramp, which is one of the constraints of the competition," Robinson said. "You essentially have to build multiple; you have to iterate on your design."

Known as ME-72, the engineering design contest was the final project and core requirement for all Caltech mechanical engineering majors.