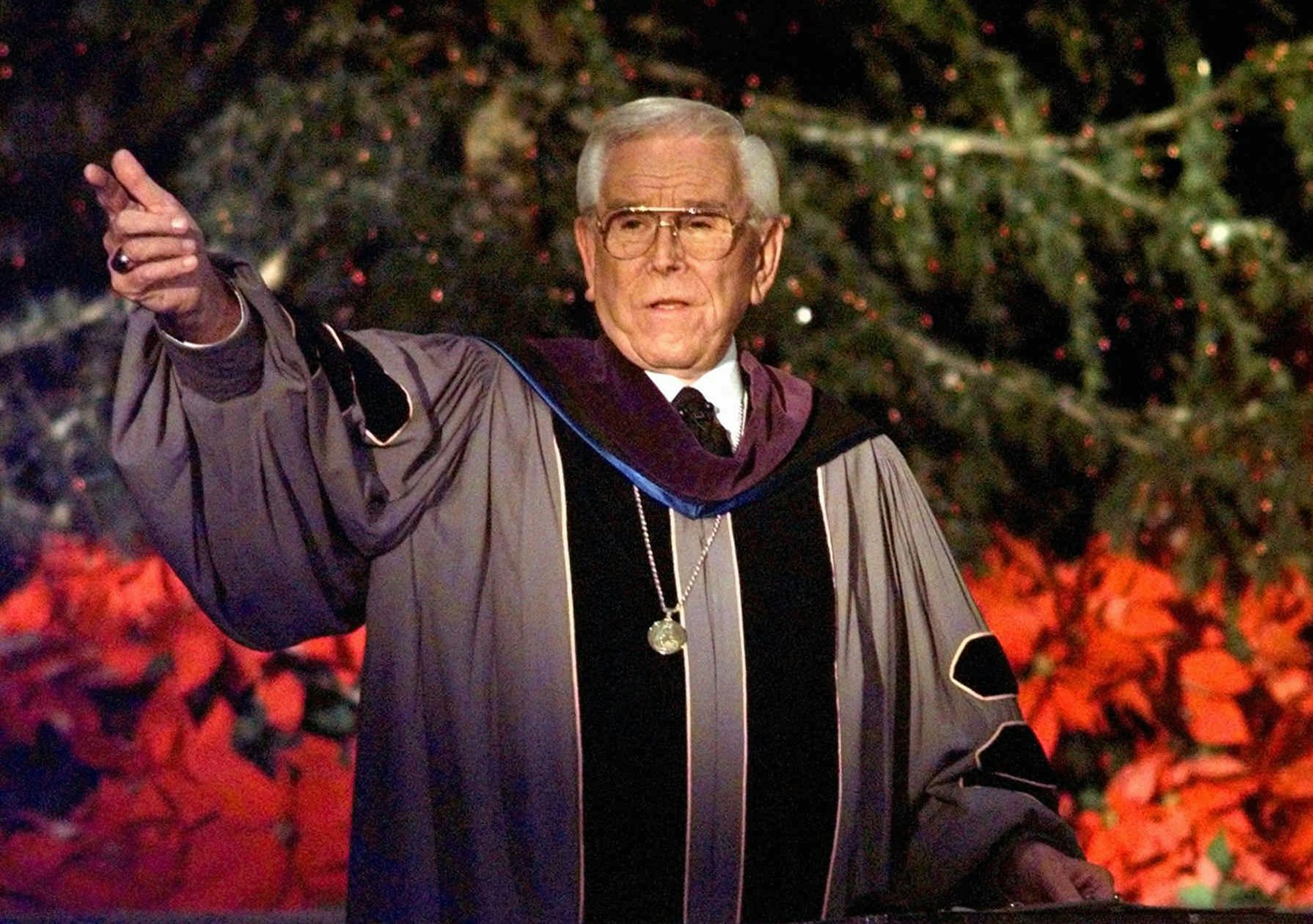 ARTESIA, Calif. -- The Rev. Robert H. Schuller, the Southern California televangelist and author who beamed his upbeat messages on faith and redemption to millions from his landmark Crystal Cathedral only to see his empire crumble in his waning years, has died. He was 88.

Schuller died early Thursday at a care facility in Artesia, daughter Carol Schuller Milner said. In 2013, he was diagnosed with a tumor in his esophagus that had spread to his lymph nodes and began treatment.

Once a charismatic and well-known presence on the televangelist circuit, Schuller faded from view in recent years after watching his church collapse amid a disastrous leadership transition and sharp declines in viewership and donations that ultimately forced the ministry to file for bankruptcy.

The soaring, glass-paned Crystal Cathedral - the touchstone of Schuller's storied ministry - was sold to the Roman Catholic Diocese of Orange in 2011, and Schuller lost a legal battle the following year to collect more than $5 million from his former ministry for claims of copyright infringement and breach of contract.

Schuller, who preached in a flowing purple robe and outsized aviator glasses, suffered a mild heart attack in 1997 but was quickly back on the pulpit, saying "the positive person" is not afraid of life's surprises. In July 2013, he was hospitalized for days after a late-night fall at his home in Orange.

Schuller's evangelical Protestant ministry, part of the Reformed Church in America, was a product of modern technology. He and his late wife, Arvella, an organist, started a ministry in 1955 with $500 when he began preaching from the roof of a concession stand at a drive-in movie theater southeast of Los Angeles.

The church's motto - "Come as you are in the family car" - tapped into the burgeoning Southern California auto culture and the suburban boom of post-World War II America.

In 1980, he built the towering glass-and-steel Crystal Cathedral to house his booming TV ministry, which was broadcast live each week from the cathedral's airy and sunlit 2,800-seat sanctuary.

As CBS "Sunday Morning" reported in 2012, Schuller was one of the first to preach from the electronic pulpit of television. His ministry at its peak reached 20 million people around the globe with his weekly television broadcast.

Schuller's message - that "Possibility Thinking" and love of God overcome hardships - was a uniquely American blend of Bible and psychology. It was inspired by late author Norman Vincent Peale, who wrote "The Power of Positive Thinking." Schuller also wrote more than 30 books, including several best-sellers.

"He was a young guy like me, and he was going out there and trying new things," said his grandson, Bobby Schuller, who pastors his own church that includes some of his grandfather's former congregants. "He did so many amazing, innovative things."

"The classical error of historical Christianity is that we have never started with the value of the person. Rather, we have started from the 'unworthiness of the sinner,' and that starting point has set the stage for the glorification of human shame in Christian theology," he wrote in his book "Self-Esteem: The New Reformation."

Schuller had admirers that ranged from fellow evangelist Billy Graham to Presidents Richard Nixon, Gerald Ford and Ronald Reagan. He also was among the first foreign religious figures invited to preach on Russian television.

Fundamentalists attacked him as a heretic and humanist for statements they believed denied the need for personal repentance of sin and for his tolerance of Jewish, Roman Catholic and other theologies.

His friendship with President Bill Clinton raised some eyebrows among the conservative Republicans of his Orange County congregation and prompted a deluge of irate letters and telephone calls.

In response, Schuller gave a sermon on tolerance.

"I do let people know how great their sins and miseries are," he said in a 1992 radio interview. "I don't do that by standing in a pulpit and telling them they're sinners. ...The way I do it is ask questions. Are you happy? Do you have problems, what are they? So then I come across as somebody who cares about them."

Schuller sometimes cited the example of his daughter Carol, who lost part of her leg because of a motorcycle accident in 1978 but went on to become a champion skier.

"When tough times come, we need to take tough action, to hold on until the tide turns for the better, to tenaciously dig in and bloom where we are planted," he wrote.

Tough times were in store for Schuller, too.

In 2006, Schuller's only son, 51-year-old Robert A. Schuller, was installed as senior pastor, the start of a carefully choreographed leadership transition. Although a father-son succession is rare in the Reformed Church in America, the Schullers considered the church a "family business" and the move was sanctioned by the national church, officials said.

But the organization fell on difficult times after the younger Schuller's installation, and he left amid a bitter family feud in fall 2008. His father had removed him from the "Hour of Power" broadcasts, and he quit as senior pastor a few weeks later.

Sheila Schuller Coleman, one of Schuller's daughters, took over as the church's top administrator, and a stable of preachers, including her and her father, handled preaching duties on the "Hour of Power."

She, too, ultimately left, taking some congregants with her to start a new ministry.

The tumult in the pulpit worsened a pre-existing decline in viewership and donations, and in 2010, Crystal Cathedral ministries filed for bankruptcy, citing debt of more than $43 million.

Bankruptcy filings indicated the ministry was paying significant tax-exempt housing allowances to Schuller family members and insiders. The allowances were legal but raised concerns among vendors and other creditors who had gone unpaid for months.

In 2012, Schuller and his wife quit the board of directors in a dispute over copyright infringement and breach of contract. That same year, they lost a legal bid to recover more than $5 million from their former ministry.

Besides his son, Schuller and his wife, Arvella, had four daughters, Sheila, Jeanne, Carol and Gretchen. Arvella Schuller died Feb. 11, 2014, after a brief illness.

Madison Cawthorn under investigation by House Ethics subcommittee
Thanks for reading CBS NEWS.
Create your free account or log in
for more features.
View CBS News In
CBS News App Open
Chrome Safari Continue
Be the first to know
Get browser notifications for breaking news, live events, and exclusive reporting.