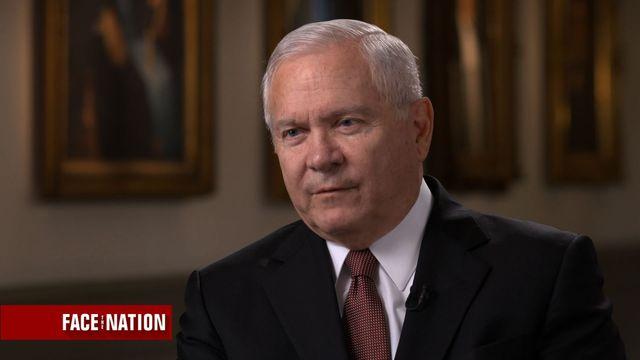 Former Secretary of Defense Robert Gates told "Face the Nation" Sunday that President Trump's disruptive approach to governing can be positive if followed by strategic plans to accomplish the Administration's goals.

"You need to get people's attention that the agenda's going to change, it is going to be different," says Gates. "But then what you have to follow that with is actually a strategy for how you're actually going to accomplish what it is that you're after."

Gates, who served four presidents on both sides of the aisle, also told John Dickerson that the absence of confirmed officials in government departments is a hindrance to the president's reform agenda.

"This is where the absence of confirmed officials in these departments is a huge hindrance to the president's agenda, and to trying to reform these departments and agencies," says Gates, "Because those are the people that become the missionaries within the department to help bring about change."

President Trump must fill 557 key executive branch positions that require Senate confirmation. As of May 16th only 29 have been confirmed by the Senate, according to The Washington Post's tracker. Twenty-Two of these positions are cabinet level positions. Twenty-four Trump choices are awaiting nomination and there are currently 49 outstanding formal nominations waiting for Senate confirmation. That leaves 455 positions with no nominee. These positions include deputy cabinet secretaries, heads of agencies and chief financial officers to name a few. (The Washington Post)

But Gates says these officials don't necessarily need years of Washington experience. When asked if a "wise man" of Washington D.C. like himself should be included in the administration, Gates rejected the idea as a requirement for a successful presidency.

"Well, my view is that it's probably not a great idea to have somebody to be sort of the appointed wise man.," says Gates, "But I think the willingness of a president to bring people in from time to time, I notice that he had Henry Kissinger in a couple of days ago. So I think on foreign policy, talking to people like Henry and so on is a good thing."

Many of Trump's key top officials come from outside of government, like Secretary of State Rex Tillerson. Gates, who recommended the former Chairman and CEO of ExxonMobil for the job and introduced Tillerson at his Senate confirmation hearing addressed his own concerns that these officials might not have the correct mindset to navigate Washington's tricky bureaucracy.

"Most of the people in the administration have no experience in government," says Gates, "And, you know, I've joked with some of these folks, and I can't remember whether I had this exact conversation with Rex Tillerson or not. But at one point or another I said, 'Can you imagine you're the corporate executive and you have a board of directors of 535 people, none of whose interests are aligned with yours or your organization's?' And, I mean, that's the difference between government and the private sector. And part of the concern that I have is that, at senior levels, there really isn't anybody who has had those experiences and can offer some good advice in terms of how you bring change and how you do some of these things."