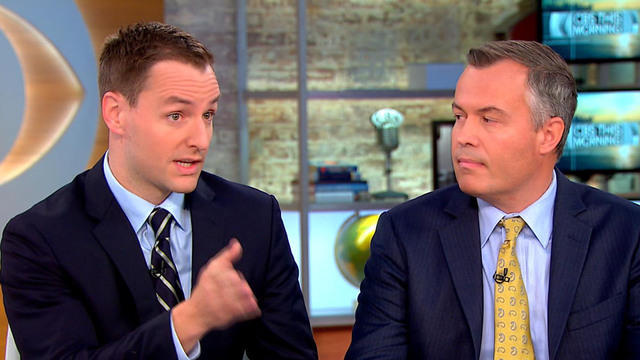 In this installment of our ongoing series, Issues That Matter, we take a closer look at how cyberhacking could be influencing U.S. elections and threatening our democracy.

Hillary Clinton's 2016 campaign manager, Robby Mook, and Mitt Romney's 2012 campaign manager, Matt Rhoades, both ran presidential campaigns that were targeted by foreign hackers. Now they're joining forces with Harvard to create a "playbook" of best practices to help both Republicans and Democrats shield elections from cyberattacks.

Rhoades and Mook joined "CBS This Morning" to discuss their new initiative and why cybersecurity threats must be dealt with in a bipartisan way.

"It's a bipartisan challenge. In 2012, when I was Mitt's campaign manager, we were actually hacked in the fall of 2011 and we were told by the FBI that the Chinese had hacked into our campaign. What the problem was -- and we didn't make a big to-do about it -- but we had to spend precious campaign dollars to up our cybersecurity network," Rhoades said. "Right now, there's a lot of campaigns, 2018, that are gonna go through similar challenges and threats."

A January intelligence report revealed that Russian President Vladimir Putin ordered a covert campaign to undermine and influence the U.S. election. The report said, "We assess Moscow will apply lessons learned from its campaign aimed at the U.S. presidential election to future influence efforts worldwide."

Mook dealt with one of the more visible examples of campaign cyberattacks when Clinton campaign chairman John Podesta fell victim to a phishing scam that resulted in the release of thousands of emails. It spurred a media firestorm.

"What was different, and the way the threat has evolved is, they're stealing information and putting it out into the press. And as Matt said, we want candidates to get out there and talk about the issues," Mook said of the hack's damage to Clinton's presidential bid. "If we allow foreign countries to steal information and push it out there, we're not going to have that debate and we're going to let those foreign countries decide what we're talking about."

While the security of presidential elections is crucial to a healthy democracy, Rhoades said he's actually less worried about 2020 than he is about how the "next rising star" could be targeted.

"You can see a Barack Obama or a George W. Bush coming a mile away and if some hacker were to go into their email and misconstrue some exchange, you could change the course of history," Rhoades said. "We want to do something tangible that actually helps campaigns, and one thing we're working on is a document that can be used by both Republican and Democrat campaigns -- a playbook of best practices from a cybersecurity standpoint," Rhoades said.

The pair believes the government plays an important role in the security of our elections, but they are hoping to highlight untapped existing resources with their effort.

"We're certainly advocating for the government to be an active partner, but part of actually why Matt and I did this was we saw there was so many resources in the private sector to help deal with this," Mook said. "There's a lot of resources out there we just need to get them connected."