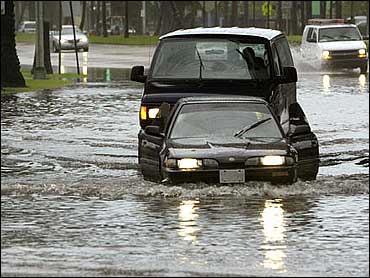 Rapidly strengthening Hurricane Rita lashed the Florida Keys and headed into the Gulf of Mexico, where forecasters feared it could develop into another blockbuster storm targeting Texas or Louisiana, bringing new misery to the beleaguered Gulf Coast.

CBS News Correspondent Mark Strassmann reports that by Friday, that second strike – possibly west of New Orleans, along the Texas coast - has forecasters predicting the unthinkable.

"Rita has the potential to be another Katrina. It could be another Category 3, 4 or maybe even 5 storm for a while and come ashore as a major hurricane," said hurricane expert Bryan Norcross at CBS station WFOR-TV in Miami.

Meanwhile, the Army Corps of Engineers raced to patch New Orleans' fractured levee system Tuesday and residents were forced to decide yet again whether to stay or go as a new, rapidly strengthening hurricane threatened to flood the city anew.

Forecasters said the storm could hit Texas by the end of the week. But a slight turn to the right was possible, and engineers warned that even a glancing blow to New Orleans and as little as three inches of rain could swamp the city's levees.

Mayor Ray Nagin and Louisiana Gov. Kathleen Blanco strongly urged people along the Louisiana coast to be prepared to get out.

Rita's threat was enough to frighten places like Galveston, Texas – potentially in Rita's path – as many people are already clearing out under a mandatory evacuation, Strassmann reports.

"You should be listening to us and you should be prepared to go on the highway," said Lyda Ann Thomas, the mayor of Galveston.

As Katrina pounded the Florida Keys, thousands of Katrina evacuees across Texas were being moved, via bus and air, away from coastal areas.

Rita went from a tropical storm with top sustained wind of 70 mph early Tuesday to a hurricane with 100 mph wind by early afternoon as it passed just south of the Keys, the National Hurricane Center said.

On the southern side of the Florida Straits, Cuba evacuated 58,000 people from low-lying areas along the northern coast, more than 6,000 in Havana alone, Cuban National Defense officials reported Tuesday.

CBS News' Portia Siegelbaum reports that as Rita continues to move west-northwest, Cuba's Civil Defense lifted the hurricane alert in four provinces in central Cuba. Cuba evacuated 136,452 people, including 5,552 tourists, as of midday Tuesday, even though the island expects to be spared the brunt of Hurricane Rita's fury.

Cuba's top meteorologist, Jose Rubiera, said the heaviest accumulation of rain was 3.1 inches in Matanzas province, Siegelbaum reports, and the speed at which Rita is moving prevented greater accumulations despite the intensity of the rainfall, he said.

Cuban officials also transferred scores of tourists from a sea-level hotel on a tip of land jutting into the ocean at the Varadero beach resort, east of Havana, where high winds knocked down utility poles and scattered tree branches.

Rita threatened to continue gaining strength as it left Florida and crossed the warm Gulf of Mexico for a weekend landfall, most likely in Texas although Louisiana or northern Mexico were possible targets.

Data from a hurricane chase plane confirmed the increase to 100 mph wind, the hurricane center said.

Hurricane warnings were posted for the Keys and Miami-Dade County. Residents and visitors were ordered to clear out of the Keys, and schools, businesses and public buildings are all closed, reports CBS News correspondent Teri Okita.

"Those who have left say they're not going to underestimate any storm any more," Okita said.

At least one segment of the Keys highway, U.S. 1, was barricaded because of water and debris, the Florida Highway Patrol said. Wind-driven water was flowing across other sections of the highway. Scattered power outages were reported.

However, Key West Mayor Jimmy Weekley said the islands might be spared the full fury of the storm, with Rita's eye remaining at sea just to the south.

"I think we did, so far, dodge a bullet," Weekley said. "We still have some time to go."

About 1,300 people were being housed in shelters in Miami-Dade and Broward counties and all three Keys hospitals had been evacuated, Gov. Jeb Bush said Tuesday.

After the sluggish government response to Hurricane Katrina along the Gulf Coast, the governor said more than 2,000 Florida National Guard troops and dozens of law enforcement officers were ready to deal with the storm's aftermath. More than 200 truckloads of ice and water were prepared for delivery to the Keys if needed and helicopters are in place for search and rescue, he said.

At 8 p.m. EDT Tuesday, Rita's eye was about 65 miles west-southwest of Key West. The storm was moving west at 12 mph on a track that kept the most destructive winds at sea, the hurricane center said.

"We have got a lot of flooding, it is literally almost up to our knees. This storm surge is really coming over — there's a 4-foot wall behind these homes and the water is coming over these homes," said Tina Verona of CBS station WFOR-TV, reporting from Marathon.

The last hurricane to directly hit Key West was 1998's Hurricane Georges, which damaged hundreds of homes with 105 mph wind.