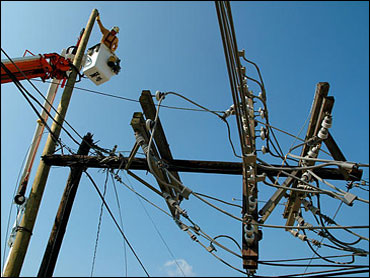 Across southeastern Texas, the Federal Emergency Management Agency delivered ice, water and packaged meals to residents who rode out last Hurricane Rita amid complaints about sluggish federal and state since the storm hit last week.

In Houston, FEMA officials claimed they were caught off-guard when they closed a relief center early on Wednesday after some of the hundreds of hurricane victims in line began fainting in triple-digit heat.

Beaumont, Texas Mayor Oscar Ortiz expressed cautious optimism after meeting with Gov. Rick Perry on Tuesday, but said he's still relying more on private companies and individuals than the government as the city struggles to recover.

"I'm just hoping (the government) comes through," Ortiz said. "It seems like the larger towns in the news are the ones getting the help."

Nearly four days after Rita hit, many of the storm's sweltering victims were still waiting for electricity, gasoline, water and other relief. The situation prompted one top emergency official to complain that people are "living like cavemen."

On Pecan Island, La. water and electricity may not return for months. Even if the services were here, some say, there'd be nothing to connect them to anyway, CBS News correspondent Lee Cowan reports.

"The house did like a complete turn, and there's nothing, there's no sign of, the wall, no walls, no doors, there's basically nothing," Natalie Hardin tells Cowan

But larger cities -- like Beaumont and Port Arthur Texas -- are hardly better off, Cowan adds. Officials are saying it may take six weeks to restore power.

Red tape was also blamed for the delays.

Nederland City Manager Andre Wimer said "it's been a terribly frustrating four days" because of problems getting help from the Federal Emergency Management Agency.

"I can appreciate the difficulty in responding to a disaster that was this widespread but at the same time we certainly feel we've not received a level of service that was satisfactory," he said.

About 476,000 people remained without electricity in Texas on Tuesday, in addition to around 285,000 in Louisiana. About 15,000 out-of-state utility workers were being brought to the region to help restore power.

"Utility companies are making progress on repairing downed power lines throughout east Texas, but the damage to the grid is causing problems beyond the area where the hurricane hit," reports CBS News correspondent Randall Pinkston. "In Houston, for example, there are rolling blackouts where power is being turned off for up to 90 minutes a day."

Ortiz was blocking residents from returning for three to five days because of a lack of services. The estimated 2,000 people who stayed put during the storm, which made landfall Saturday along the Texas-Louisiana border, face an overnight curfew.

FEMA had generators that the towns and cities throughout Jefferson County needed, but they were sitting on the ground, two days after the hurricane, reports Pinkston, and the county executive had to go through a lot of bureaucratic hurdles just to get them released and delivered to a local hospital.

After complaining about a sluggish federal response, Port Arthur received 121 small generators Tuesday afternoon. Ortiz planned to give them to emergency personnel first and then to merchants who provide high-demand products such as gasoline, water and food.

"We have been living like cavemen, sleeping in cars, doing bodily functions outside," said John Owens, emergency management coordinator for Port Arthur. "And meanwhile we're the victims, and we have families here."

Texas Republican Rep. Kevin Brady, whose district includes some of the counties hit by Rita, said he will be developing legislation to provide relief, especially for towns that took in evacuees from Hurricane Katrina.

"While we think much of our help can come through traditional disaster relief programs, we know there will be expenses above and beyond that," Brady said. "We don't want those smaller communities to have sacrificed and not come out whole."