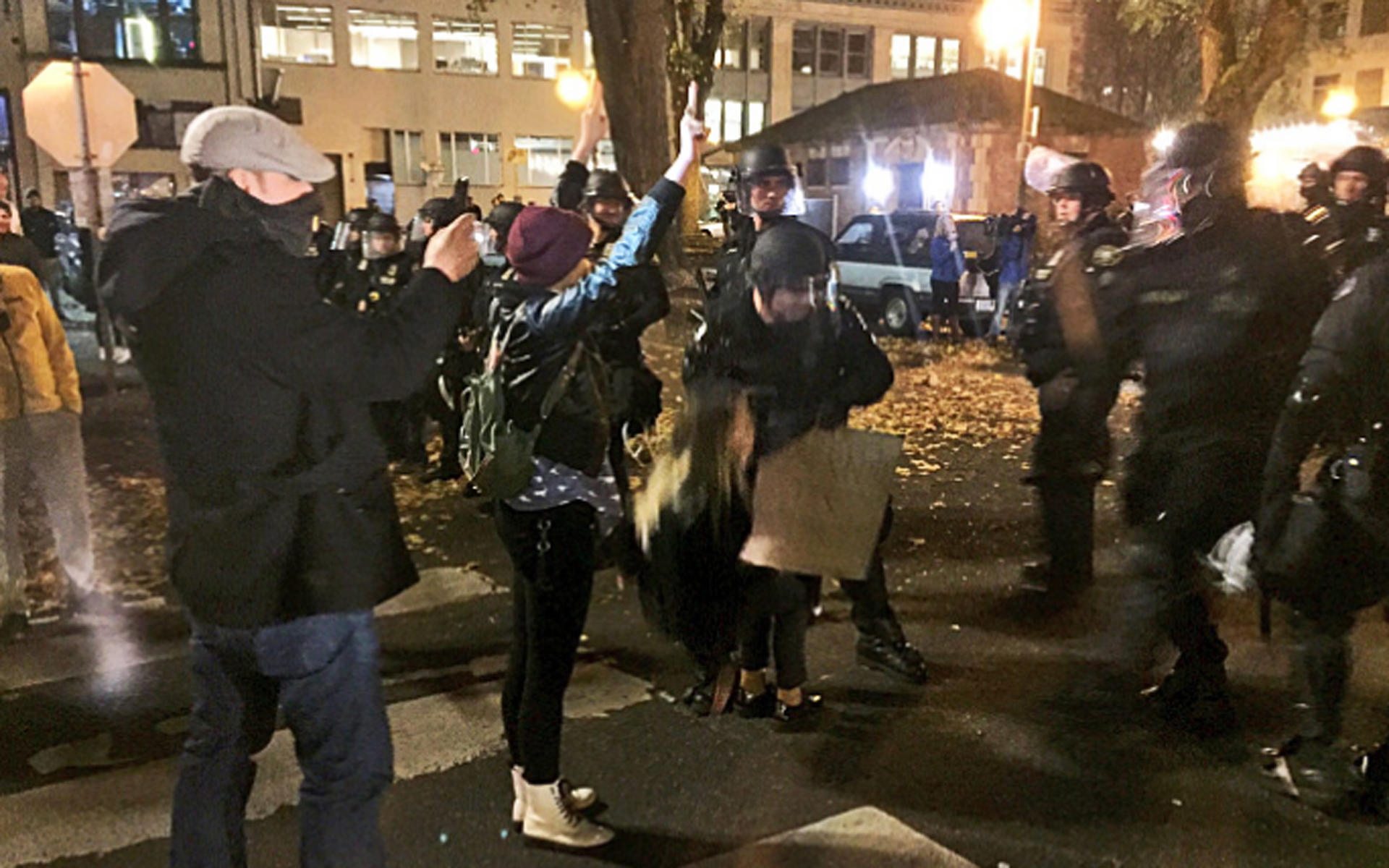 PORTLAND, Ore. -- Another round of protests over Donald Trump’s election hit many major cities across the country Thursday during the day and at night and, while most were peaceful, at least one turned violent and was officially dubbed a riot.

The president-elect fired back on Twitter after demonstrators in both red and blue states hit the streets again to express outrage over his unexpected win.

The latest demonstrations occurred from Portland, Oregon, to Chicago, to New York and parts in between. Many drew several hundred people but some drew thousands.

In Portland, police declared a riot Thursday night, citing “extensive criminal and dangerous behavior” and tweeting that they were getting increasing reports of vandalism and aggressiveness as people marched through the city. They labeled some protesters “anarchists.”

Marchers were spray-painting buildings, the station said. People were throwing projectiles at officers at one point and significant damage was done at a car dealership, police said. Multiple news outlets posted videos and photos of vehicle windows smashed out.

Protesters took over the Hawthorne Bridge, stopping cars on the roadway and climbing railings, KOIN said.

A video captured by freelance journalist Crystal Contreras showed an altercation on the bridge after a woman threw laundry detergent at protesters.

Police said people were breaking the windows of some businesses in Portland’s Pearl district.

Police advised people to discontinue the use of illegal fire devices such as fireworks and said multiple people with bats were reported in the crowd. Protesters carried signs reading, “No racists, no hate” and “Revolt.”

People not wanting to be associated with protesters should leave the area, police said. At one point, they began making arrests. They had said earlier charges could include rioting -- a felony.

The situation escalated at about 11:30 p.m. when officers began physically pushing the crowd back, arresting more people and using pepper spray, flash bangs and explosions and what appeared to be some kind of gas to disperse crowds. An unlawful assembly was declared.

One KOIN reporter was hit by a rubber bullet fired by police.

Oregon Department of Transportation officials closed portions of Interstate 5 and Interstate 84 in the area intermittently as a precaution. Officials urged travelers to use caution and watch for people in unexpected places on roads. Some bridges were also closed.

Police reported 26 arrests in all.

Police declared an unlawful assembly as about 1,000 protesters gathered downtown, that station said.

In Denver Thursday night, protesters managed to briefly shut down Interstate 25 near downtown.

Denver police tweeted around 10 p.m. that demonstrators made their way onto the freeway and traffic was halted in the northbound and southbound lanes. Police say the interstate was reopened about half an hour later as the crowd moved back downtown.

Earlier protests in Denver, Boulder and Colorado Springs on Wednesday and Thursday went off peacefully.

In San Francisco’s downtown, high-spirited high school students marched through, chanting “not my president” and holding signs urging a Trump eviction. They waved rainbow banners and Mexican flags, as bystanders in the heavily Democratic city high-fived the marchers from the sidelines.

“As a white, queer person, we need unity with people of color, we need to stand up,” said Claire Bye, a 15-year-old sophomore at Academy High School. “I’m fighting for my rights as an LGBTQ person. I’m fighting for the rights of brown people, black people, Muslim people.”

In Philadelphia, protesters near City Hall held signs bearing slogans like “Not Our President,” ‘’Trans Against Trump” and “Make America Safe For All.” About 500 people turned out at a protest in Louisville, Kentucky and in Baltimore, hundreds of people marched to the stadium where the Ravens were playing a football game.

Hundreds of protesters demonstrated outside Trump Tower in Chicago.

Another protest was building in Los Angeles, where 28 people were arrested Wednesday for blocking traffic during a demonstration that also saw vandalism to some buildings and a news truck.

Los Angeles Mayor Eric Garcetti, a Democrat, condemned what he called a “very, very small group of people” that caused problems in that demonstration but said he was proud of the thousands more that peacefully protested.

“I actually thought it was a beautiful expression of democracy. I think it was a marvelous thing to see the next generation of this country get engaged and involved,” he said at a news conference, adding that at one time in his life he might have joined them.

As expected, the demonstrations prompted some social media blowback from Trump supporters accusing protesters of sour grapes or worse, though there were no significant counter-protests.

Trump supporters said the protesters were not respecting the democratic process.

As of Thursday, Democrat Hillary Clinton was leading Trump in the popular vote nationwide 47.7 percent to 47.5 percent, but Trump secured victory in the Electoral College.