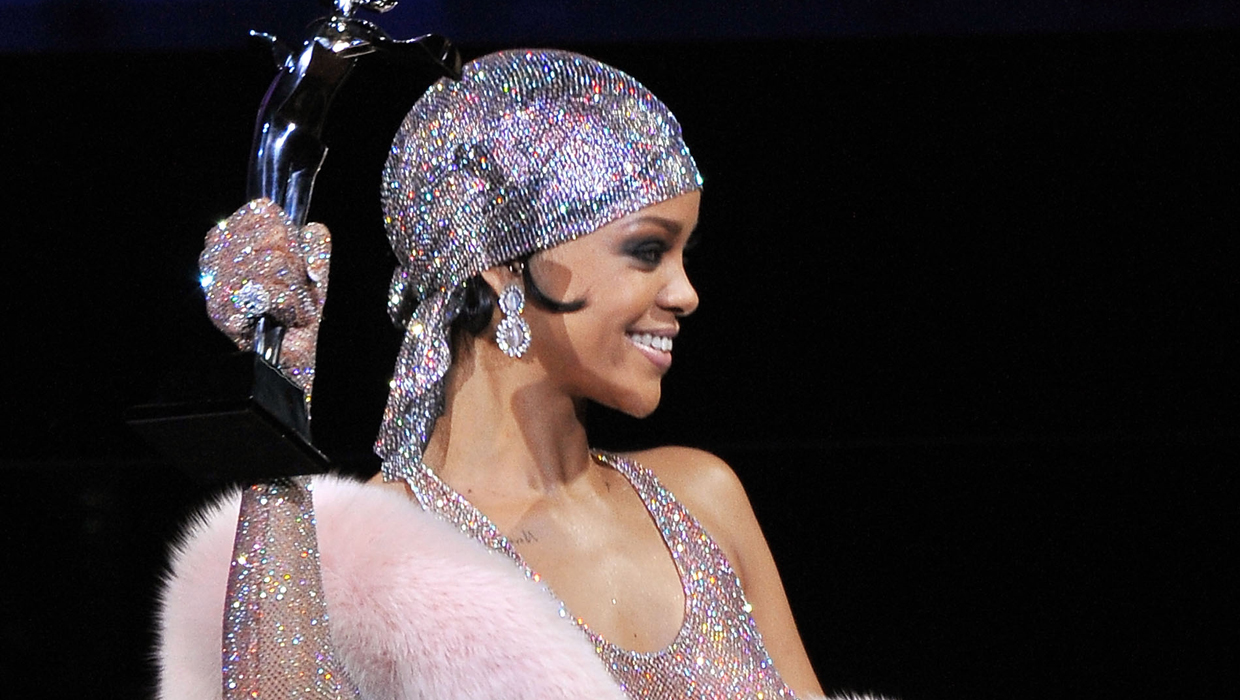 Rihanna was among the style-centric honorees Monday at the annual Council of Fashion Designers of America awards, which also honor the year's top designers.

Fashion rules are made to be broken, the 26-year-old told a glittering crowd of fashion industry leaders, and her outfit dramatically conveyed that message: a sheer fishnet gown, sparkling with thousands of embedded crystals, that left little underneath to the imagination.

The singer cemented her role as a fashion luminary by receiving the 2014 Fashion Icon Award from the Council of Fashion Designers of America. Her trophy was presented by Anna Wintour, the powerful Vogue editor, who said that with Rihanna, "the point is to be audacious -- even jaw-dropping or button-pushing."

Accepting the award, Rihanna spoke of her origins in Barbados, where "I didn't have a lot of access to fashion." But, she said: "Fashion has always been my defense mechanism." Even as a child, she told the crowd, she used to think: "She can beat me, but she can't beat my outfit."

"I can compensate for all my weaknesses with my fashion," she said, adding: "There are rules, but rules are meant to be broken."

Also honored at the annual CFDA ceremony at Lincoln Center were a number of top designers. Joseph Altuzarra won the womenswear award, and the menswear prize went to Dao-Yi Chow and Maxwell Osborne, the duo behind the Public School label. Sisters Ashley Olsen and Mary-Kate Olsen of The Row won the accessories award.

The international award went to Raf Simons of Dior, and the CFDA lifetime achievement award went to designer Tom Ford, who quipped that he hoped it didn't spell the end of his career.

"Please have me back in another 25 years," Ford joked. "I promise I'll wear a toupee and walk with a cane."

An emotional high point of the ceremony was the bestowing of the prestigious Founders Award to Bethann Hardison, a former model and modeling agent who has been a vocal champion for diversity on runways.

She was introduced by model Naomi Campbell, who choked up when she described her admiration for Hardison. When Hardison came onstage to accept her trophy, so did 16 models of color, standing behind her and smiling. She spoke passionately of the need for diverse runways -- "just let them model," she said -- and added that things were improving throughout the industry on that score.

The annual CFDA show, hosted this year by director and screenwriter John Waters, always draws a mix of fashion insiders and Hollywood. This year, one of the biggest names was Oscar-winning actress Lupita Nyong'o ("12 Years a Slave" and also newly cast in the next "Star Wars" film), who presented the womenswear award to Altuzarra.

Nyong'o, who has become as famous for her choices on the red carpet as her skyrocketing acting career, told the crowd that if there was one thing she had learned in a year of film festivals and awards shows, "it is the power of fashion." She wore a cropped Suno jumpsuit, in multi-colored stripes.

But none made as big a splash as Rihanna, in her translucent outfit designed by Adam Selman that was embedded with more than 200,000 Swarovski crystals. The gown was accompanied by matching, elbow-length gloves and a glittering headscarf.

Speaking of Rihanna before the show, designer Posen called the pop star a fashion risk-taker who skillfully melds red carpet glamour with a rebellious streak.

"She takes risks and she marches to her own drum and she knows what she likes," Posen told The Associated Press.

Rihanna also has a great appreciation for designers, Posen added: "That's why people love to dress her."

Also singing Rihanna's praises was popular designer Alexander Wang, a nominee for both the womenswear and accessories awards.

"I love my girl RiRi," he said. "She's fearless. She has guts. Even in sweatpants, she owns it!"