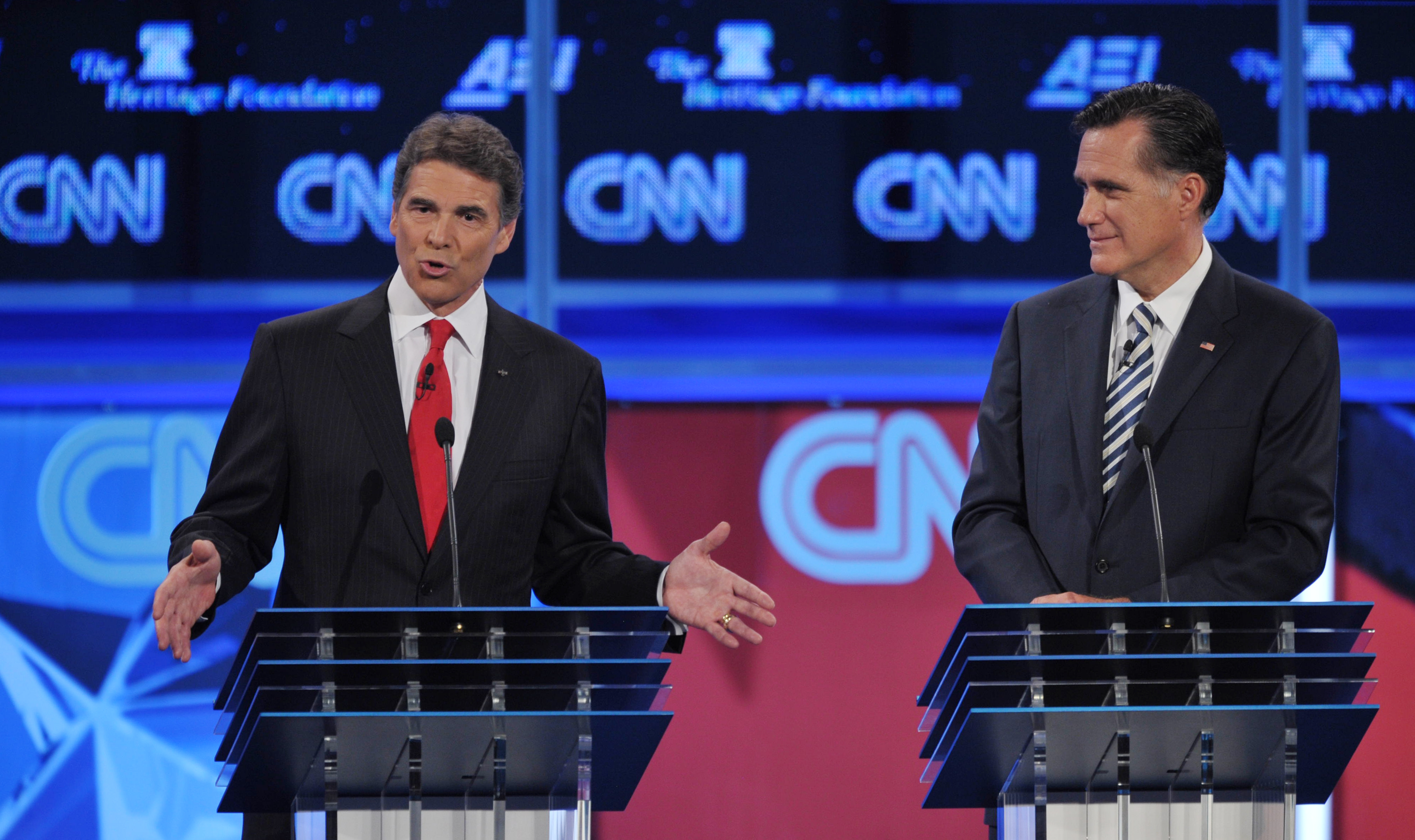 Republican presidential candidate Rick Perry on Tuesday called for Defense Secretary Leon Panetta to resign in protest after the supercommittee failed to strike a deal on long-term deficit reduction, paving the way for nearly $600 billion in possible Pentagon budget cuts.

Since the 12-member congressional panel was unable to find $1.2 trillion in budget savings, across-the-board spending cuts are slated to kick in -- including a large chunk in defense spending that pro-defense conservatives are protesting. President Obama said on Monday that he would veto any effort to roll back the supercommittee "triggers."

"It was reprehensible, for me, for this president to stand in front of Americans and to say that that half a trillion dollars, $500 million-plus is not going to be on the table and we're just going to have to work our way through it, putting young men and women's life in jeopardy," Perry said in a CNN debate on foreign policy Tuesday. "Even his own secretary of defense said it was irresponsible. As a matter of fact, if Leon Panetta is an honorable man, he should resign in protest."

Perry blamed Mr. Obama for what he called the "super failure."

"We had a president of the United States who is not a leader. He pitched this over to them and said, here, you all figure this out," he said.

Former Utah Gov. Jon Huntsman said that in order to tackle the deficit, defense spending must be on the table along with everything else.

"But we need spending for the Department of Defense that follows a strategy. And that strategy needs to follow how we best protect the American people now that we're in the second decade of the 21st century," he said.

Former House Speaker Newt Gingrich said he would not rule out cuts to defense spending "because it's clear that there are some things you can do in defense that are less expensive."

"It's clear, if it takes 15 to 20 years to build a weapons system at a time when Apple changes technology every nine months, there's something profoundly wrong with this system," he said.

Gingrich said that in order to tackle the deficit, he would reform Social Security. Gingrich said his reforms would be based on the model in Chile, where citizens can create personal savings accounts. The government of Chile has promised to make up the difference if a person doesn't have as much savings in their personal account as they'd get from Social Security.

"I think you can have a series of entitlement reforms that, frankly, make most of this problem go away without going through the kind of austerity and pain that this city likes," he said.

Rep. Michele Bachmann suggested that the supercommittee's mission was small in comparison to the larger problem of national debt.

"All that they were asked to do is cut back on $1.2 trillion of that increase in debt. We aren't even talking about the central issue, which is balancing the budget," she said. "We need to balance the budget and then chip away at the debt. This isn't Monopoly money."