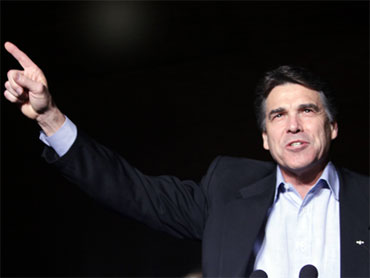 Texas Gov. Rick Perry, who often makes national headlines for his strong conservative views and flashy style, is the latest Republican to come out against Arizona's controversial new immigration law.

"I fully recognize and support a state's right and obligation to protect its citizens, but I have concerns with portions of the law passed in Arizona and believe it would not be the right direction for Texas," Perry said in a statement.

The law in question, signed by Arizona's governor last week, would require immigrants to carry documents verifying their immigration status. It would also require police officers to question a person about his or her immigration status if there is "reasonable suspicion" that person may be illegally in the country.

While some local lawmakers across the country are condemning the law and moving to boycott business with Arizona, others are praising it and calling for similar laws in their own states. There are some state representatives in Texas who say their state should adopt a strict immigration measure like Arizona's.

But Perry, who bragged earlier this week about shooting a coyote and suggested last year that his state could secede from the United States, explained why he thinks the Arizona law is flawed.

"Some aspects of the law turn law enforcement officers into immigration officials by requiring them to determine immigration status during any lawful contact with a suspected alien, taking them away from their existing law enforcement duties, which are critical to keeping citizens safe," Perry said.

Meanwhile, the Arizona legislature yesterday moved to modify the new law in order to address the concerns raised by Perry and others, the Arizona Republic reports.

State lawmakers proposed changes the phrase "lawful contact" to "lawful stop, detention or arrest" in order to clarify that officers would not need to question presumably innocent parties, such as crime victims or witnesses, about their immigration status. They also moved to eliminate the word "solely" from the sentence "A law enforcement official or agency... may not solely consider race, color or national origin" in establishing "reasonable suspicion" that a person is in the country illegally. They also clarified that an officer is required to verify a person's immigration status if there is "reasonable suspicion" to doubt it when responding to city ordinance violations, which could include responding to loud parties or barking dogs.

Many American citizens of Hispanic descent are concerned they could be unjustly arrested under the law because of their race. The concerns are even impacting enrollment at the University of Arizona, KOLD News, a CBS affiliate reports.

"The families of a number of out-of-state students (to date all of them honors students) have told us that they are changing their plans and will be sending their children to universities in other states," University President Robert Shelton said in an e-mail sent to the campus community yesterday. "This should sadden anyone who cares about attracting the best and brightest students to Arizona."

Some of the strongest criticism of the law has come from California, where a number of city councils are moving to cut off their economic ties to Arizona. Last night on NBC's "Tonight Show," Calif. Gov. Arnold Schwarzenegger called the law "a mess."

"I would never do that in California. No way," he said.