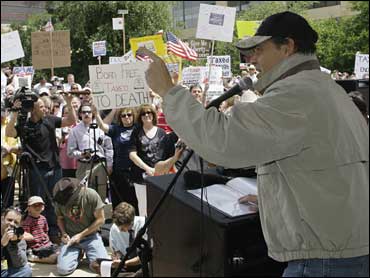 (AP Photo/Harry Cabluck)
Does Gov. Rick Perry want his state of Texas to secede from the union?

Perry is making headlines for suggesting yesterday that people in his state are so fed up with high taxes and President Obama's stimulus spending that breaking away from the Union might be an option.

Later, Perry backed away from his earlier comments, however. He emphasized in an interview with the Fort Worth Star-Telegram that he never specifically stated that Texas should think about seceding.

Still, Perry's comments are generating plenty of attention, both in Texas and nationwide.

"There's a lot of different scenarios," Perry said in Austin, according to the Associated Press. "We've got a great union. There's absolutely no reason to dissolve it. But if Washington continues to thumb their nose at the American people, you know, who knows what might come out of that. But Texas is a very unique place, and we're a pretty independent lot to boot."

Speaking to an anti-tax "tea party," the Republican governor also dismissed criticism that people protesting taxes across Texas and throughout the country were "right wing extremists," The Dallas Morning News reports. Rather, he said that only by affirming states' rights would Texans be able to stop the federal government's reckless tax and spending policies.

"They're overturning the rights we had one by one, making choices that would leave our founding fathers scratching their heads," Perry told the crowd.

Perry is facing a tough primary challenge from U.S. Senator Kay Bailey Hutchinson. A recent poll by the University of Texas at Austin's Department of Government had him trailing the Texas senator 36%-30%, with 24% still undecided.

Perry attracted national attention recently by refusing $550 million in federal stimulus money for the state's unemployment funds. He said it came with too many strings attached and would leave Texas on the hook to fund the program once federal money dried up, the Houston Chronicle reported last March.

Perry spoke at three "tea party" rallies across his state. Hundreds of similar protests were held nationally yesterday as Americans hurried to meet the April 15th deadline for filing their federal and state taxes.

Despite his later clarification, Perry's fiery words may have helped shore up the conservative base for his primary challenge – at least among Texas Republicans fed up with taxes. According to Politico, the governor has effectively transformed himself into the "tea party darling."