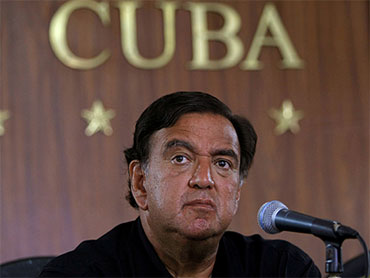 New Mexico Gov. Bill Richardson told journalists in Havana that while he was here on a trade mission for his state, he also raised the case of imprisoned USAID contractor Alan Gross with Cuban authorities.

Gross has been jailed since December for bringing illegal satellite equipment to dissidents in Cuba.

"Knowing I was taking a trip to Cuba on a trade mission, the Obama administration asked me to raise the case of Alan Gross. I did so with various high level officials,' Richardson said during a press conference.

"I have been told it's in a sensitive investigative and legal process. I believe I made inroads and some progress in the case," he said, but added, "I am not a negotiator for the administration. "The New Mexico governor also denied bringing any special message from the Obama administration to the Cuban government. Richardson, who secured the release of three prisoners from Cuba 10 years ago, pointed out that that effort took two visits before it was successful.

Richardson said he did "not expect to see Fidel Castro" but if he did he would raise the case with him.

The governor said that after his meeting with Cuban Foreign Minister Bruno Rodriguez, that he thought the Cuban government has a better understanding of who Alan Gross is. Richardson noted that he had met with Gross' wife and his lawyer and said, 'He's a good man. He may have made some mistakes. He is innocent. Releasing him would be a humanitarian gesture. He is not a political case."

Richardson expressed the hope that the issue would be dealt with swiftly.

He further described the current mood between the U.S. and Cuba as "very positive" although moving in "small steps."

"The Obama administration deserves credit for taking positive steps too, such as proposed expansion of travel," for Americans to the island, Richardson said.

Richardson also praised Cuba's recent prisoner releases. "The Cuban government deserves credit for tripartite agreement between the Catholic Church and Spanish government on the release of 32 political prisoners and hopefully more will happen in days to come," he said.