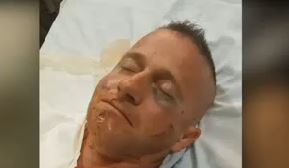 CHARLESTON, W.Va. - A war veteran running for a state senate seat on the Democratic ticket in West Virginia was brutally beaten Sunday at a cookout, leaving him with several broken bones and in need of surgery.

Richard Ojeda is still in the trauma unit at CAMC General Hospital in Charleston as of Monday morning, reports CBS affiliate WOWK-TV. He will have surgery later in the week.

He reportedly wants to get out campaigning again by next week.

Jonathan Porter of the Whitman's Creek area of Logan County has been arrested as the primary suspect in the incident, although no motive has been provided as of yet. Officials told WOWK-TV he is facing three felony charges.

Ojeda's sister, Kelly Ojeda, said they were all attending a political cookout Sunday in Logan County when the suspect asked Ojeda for a campaign bumper sticker.

Ojeda told WOWK that he doesn't remember much after he went to put the sticker on the suspect's vehicle. Witnesses said it was then that the suspect attacked the Iraq and Afghanistan veteran with brass knuckles, striking him eight or nine times, knocking him out.

The suspect then allegedly got in his vehicle and attempted to run Ojeda over with it, but bystanders stood in the suspect's way.

Police said that the suspect then fled the scene, hitting two ATVs that were blocking the road, one of which had a driver, who escaped injury. The suspect later turned himself in.

Ojeda is running against incumbent Art Kirkendoll in District 7.

In a Facebook statement, Kirkendoll said: "I was informed that my opponent was physically assaulted and injured at a political function today. I do not now, nor have I ever, condoned violence. It has no place in our political campaigns or in our communities. My and my family's thoughts and prayers are with my opponent and his family and we wish him a speedy recovery.''