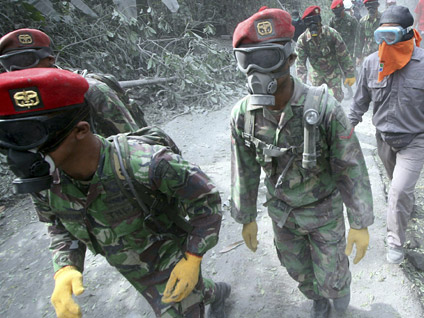 The new Iraqi government must improve security, open up its economy and "open political space for all members of Iraqi society who reject violence," Secretary of State Condoleezza Rice said Wednesday.

Rice told participants in an international conference on Iraq's reconstruction that the world has obligations to support and strengthen postwar Iraq.

"Iraq, in turn, has obligations of its own," if it is to make the best use of the international financial largesse flowing to Iraq, Rice said.

Although the United States has repeatedly stressed that Iraq's Shiite-dominated coalition government must find ways to more fully include the minority Sunni Arabs, Rice went slightly further Wednesday by including economic reform and security obligations on Iraq's to-do list.

Security has largely been the job of U.S. forces in Iraq, although Iraq's own internal security and police forces are gradually assuming a greater role.

Rice is co-chairing the conference with European and Iraqi leaders. The session of about 80 nations in Brussels is intended to match the practical needs of the new Iraqi government with international donations of expertise and other support.

The conference is addressing three main issues: the political process, the economy and reconstruction, and security and rule of law.

In Iraq on Wednesday, gunmen killed a former judge whose name once was on a list of Sunni Arabs joining a parliamentary committee to draft Iraq's new constitution, officials said.

Former judge Jassim al-Issawi, whose candidacy to join the 55-member committee was later dropped, was a law professor at Baghdad University and the former editor-in-chief of Al-Siyadah newspaper, said Salih al-Mutlak, secretary general of the Sunni National Dialogue Council

The core of a violent insurgency plaguing most of Iraq is thought to be composed of Sunni Arabs fighting to overthrow the U.S.-backed, Shiite-led government of Prime Minister Ibrahim al-Jaafari. Some militants have begun threatening fellow Sunnis because some of their leaders have expressed a readiness to join the political process.

"The assassination of professor Jassim al-Issawi comes within an organized campaign aiming to liquidate all Sunni figures who will play an important role in the upcoming political process," said al-Mutlak. "Many threats were directed toward Sunni figures in order for them not to take part in the constitutional committee."

On Monday, Sunnis submitted a list of 15 candidates for the Shiite-dominated committee drafting the constitution, but were having second thoughts about a demand by legislators that they first win the backing of a larger Sunni group.

The names of the Sunni candidates have not been announced, but al-Issawi was not on the most recent list. He was dropped in earlier negotiating rounds, officials said.

The latest snag in efforts to give Sunnis a bigger say in drafting the constitution will likely take days to resolve, further eroding the little time remaining for the charter to be drafted by mid-August. Iraq's government wants to hold a referendum on the charter ahead of December elections for a full-term government.

The number of attacks blamed on Islamic extremists has escalated since al-Jaafari announced his government on April 28. Nearly 1,200 people have been killed since then, according to an AP tally based on military, police and hospital reports.

On Tuesday, al Qaeda in Iraq said it has formed a unit of potential suicide attackers who are exclusively Iraqis, an apparent bid to deflect criticism that most of the bombers are foreign.

The U.S. military has said foreign fighters make up only about 5 percent of the insurgents. They do a disproportionate amount of killing, however, in part because they are more likely to carry out suicide bombings.

Analysts in the U.S. and elsewhere say the foreign fighters are primarily Islamic militants waging what they regard as jihad or holy war, while the much larger homegrown, mostly Sunni Arab, insurgency has tended to be motivated more by political grievance and factional rivalry.