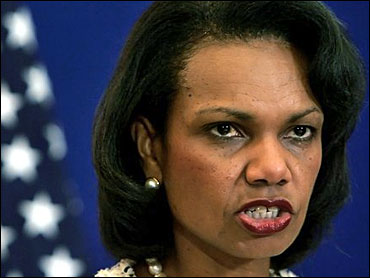 A day after a Democratic senator suggested that the U.S. should not have invaded Iraq in 2003 – even if it meant leaving Saddam Hussein in power – top Bush administration officials fired back.

"There is, in retrospect, an attempt to somehow paint Saddam Hussein as just sitting there calmly in the region. Yes, he was a bad guy; people didn't like him, but he wasn't much of a threat," U.S. Secretary of State Condoleezza Rice said on CBS's Face The Nation, adding, "It's simply ahistorical.

In an exclusive interview with CBS News, Sen. John D. Rockefeller, D-W.Va., not only pointedly questioned the necessity of the 2003 U.S. invasion of Iraq, but went a step further in his criticism, telling CBS News correspondent Sharyl Attkisson that the world would be better off with Saddam Hussein in power.

"It's called the war on terror," Rockefeller said. "He wasn't going to attack us. He would've been isolated there. He would have been in control of that country, but we wouldn't have depleted our resources preventing us from prosecuting a war on terror which is what this is all about."

Both Rice and Vice President Dick Cheney questioned Rockefeller's stance that Hussein was boxed in by enemies.

"The notion that, somehow, someone who had caused more than a million deaths in the Iran-Iraq war, someone who had invaded Kuwait, and we believe, was probably on his way to the Kingdom of Saudi Arabia, somebody who threatened his neighbors every day, who shot at our aircraft, who had broken out of an embargo and was using his oil wealth to build up an arsenal of weapons, that this is not a threat, in the world's most volatile region — I just think it's very, frankly, odd analysis," Rice said.

While admitting that Iraqi insurgents have prolonged the war in ways the United States did not anticipate, Cheney agreed with Rice.

"The fact is, the world is better off today with Saddam Hussein out of power. Think where we'd be if he was still there," Cheney said on NBC's Meet The Press.

The reports provided by Democrats disclosed for the first time an October 2005 CIA assessment that prior to the war, Saddam's government "did not have a relationship, harbor, or turn a blind eye toward Zarqawi and his associates."

Rockefeller, who is the committee's top Democrat, said the Bush administration's push for war, "exploited the deep sense of insecurity among Americans in the immediate aftermath of the Sept. 11 attacks, leading a large majority of Americans to believe — contrary to the intelligence assessments at the time — that Iraq had a role in the 9/11 attacks."

Other prominent Democrats said they supported Rockefeller's criticism of the president, but were not quite as strident in their remarks.

Sen. Chuck Schumer, who also appeared on Face The Nation, told Bob Schieffer his stance was "somewhere in the middle" of Rockefeller and Rice's opinions.

"It was a good thing to get rid of him. He was a brutal dictator," the New York Democrat said of Hussein. "But the problem is that once Saddam was gone, this administration had no plan as to what to do next.

"And right now, we're in a quagmire in Iraq because it seems to be devolving into a civil war. We're policing the civil war," Schumer said.

"I mean, look, we're all delighted that Saddam Hussein is gone," Sen. John Kerry, D-Mass., said on CNN. "But in the larger context of our foreign policy and interests in the region, the fact is that they have made a mess of the policy in Iraq."