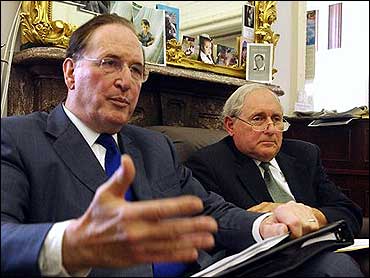 When the Senate Intelligence Committee released a declassified version of its findings this past week, the Republican chairman of the committee, Pat Roberts, left town without doing interviews, calling the report a rehash of unfounded partisan allegations.

Its statements like this one, made Feb. 5, 2003, by then-Secretary of State Colin Powell that have become so controversial, implying Iraq was linked to terror attacks.

But after 2 1/2 years of reviewing pre-war intelligence behind closed doors, the lead Democrat on the Intelligence Committee, Sen. John Rockefeller of West Virginia, who voted for the Iraq War, says the Bush administration pulled the wool over everyone's eyes.

"The absolute cynical manipulation, deliberately cynical manipulation, to shape American public opinion and 69 percent of the people, at that time, it worked, they said 'we want to go to war,'" Rockefeller told CBS News correspondent Sharyl Attkisson. "Including me. The difference is after I began to learn about some of that intelligence I went down to the Senate floor and I said 'my vote was wrong.'"

Rockefeller went a step further. He says the world would be better off today if the United States had never invaded Iraq — even if it means Saddam Hussein would still be running Iraq.

He said he sees that as a better scenario, and a safer scenario, "because it is called the 'war on terror.'"

Does Rockefeller stands by his view, even if it means that Saddam Hussein could still be in power if the United States didn't invade?

"Yes. Yes. [Saddam] wasn't going to attack us. He would've been isolated there," Rockefeller said. "He would have been in control of that country but we wouldn't have depleted our resources preventing us from prosecuting a war on terror which is what this is all about."

Republicans say there was flawed intelligence to be sure, but they insist there was no attempt to mislead the public.

"In 2002 and 2003, members of both parties got a good look at the intelligence we had and they came to the very same conclusions about what was going on," White House Spokesman Tony Snow said.

Should schools ban their students from using cellphones?
Thanks for reading CBS NEWS.
Create your free account or log in
for more features.
View CBS News In
CBS News App Open
Chrome Safari Continue
Be the first to know
Get browser notifications for breaking news, live events, and exclusive reporting.