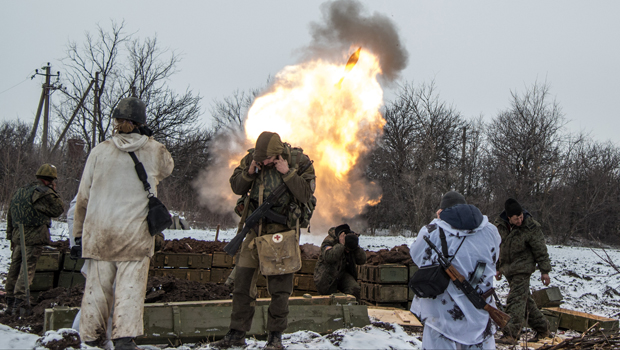 KIEV, Ukraine -- U.S. Secretary of State Rex Tillerson has told Russia it must take the first steps to reduce tensions in eastern Ukraine and that American and European sanctions would remain in place until Moscow reversed course in the region.

In surprisingly blunt language just two days after Presidents Donald Trump and Vladimir Putin met in Germany, Tillerson said Russia should use its influence with separatists in Ukraine's east to fully restore an oft-violated truce, end harassment and attacks on international monitors and pull back heavy weaponry to lines agreed upon under a 2-year-old accord known as the Minsk Agreement. He said a primary goal of the United States "is to restore Ukraine's territorial integrity and sovereignty" and that would be "required in order for the U.S. and Russia to improve our relationship."

"It is necessary for Russia to take the first steps to de-escalate the situation in the eastern part of Ukraine," Tillerson told reporters at a joint news conference in Kiev with Ukrainian President Petro Poroshenko. "This is necessary for us to make any movement."

"We do call on Russia to honor its commitments that were made under the Minsk accords and to exercise influence over the separatists in the region that they have complete control over," he said, adding later: "The U.S. and E.U. sanctions on Russia will remain in place until Moscow reverses the actions that triggered these particular sanctions."

Tillerson's tough talk clearly pleased Poroshenko, who has long complained about Russian interference in his country's east and has watched nervously as the Trump administration has sought to improve ties with Moscow. He thanked Tillerson for the continued U.S. commitment to Ukraine's sovereignty and territorial integrity and expressed deep appreciation for his "symbolic and timely visit immediately after the meetings at the G-20 in Hamburg" where Trump met with Putin.

Poroshenko was especially complimentary of Tillerson's decision last week to appoint a special envoy for Ukraine negotiations, former U.S. ambassador to NATO Kurt Volker, who is widely considered to be a hawk on Russia.

Volker will oversee U.S. efforts to press Ukraine and Russia to fully comply with the Minsk Agreement, which lays out a roadmap for reducing the conflict that has claimed some 10,000 lives over the past three years. The accord was reached in early 2015 in the capital of Belarus by the leaders of France, Germany, Ukraine and Russia but has yet to be implemented. Under the Obama administration, the U.S. had taken a hands-off approach to Minsk, allowing the Europeans to take the lead.

"We are disappointed by the lack of progress under the Minsk process and that's why we are appointing a special representative," Tillerson said.

Poroshenko, who said Volker would remain in Ukraine for the next several days, maintained that a resolution to the crisis "needs only the political will of Moscow."

"Kiev did not plan, did not start this war," he said. "It was planned and started in Moscow. That's why the keys to peaceful settlement are in Moscow."

Russia denies charges that it is actively involved in the insurgency, but has said that in order for peace to take hold, Kiev must agree to political reforms that would give the east greater autonomy. The Ukrainian government contends that political reform depends on an end to the violence.

Tillerson and other U.S. officials for some time have been pushing Ukraine to press ahead with reforms that would curb corruption and improve governmental transparency.

Speaking to a group of reform advocates at the U.S. ambassador's residence, Tillerson praised Ukraine's progress in combating graft but made clear that more must be accomplished.

"Ukraine has come a long way," he said. "We want to acknowledge that, (but) we still have more to do," he said. "This is all about securing Ukraine's future: making the place attractive for investors, being attractive to their European neighbors."

"We came to agreement with the secretary-general that Ukraine and the whole world today need strong and decisive actions by the U.N. like never before," Poroshenko said.