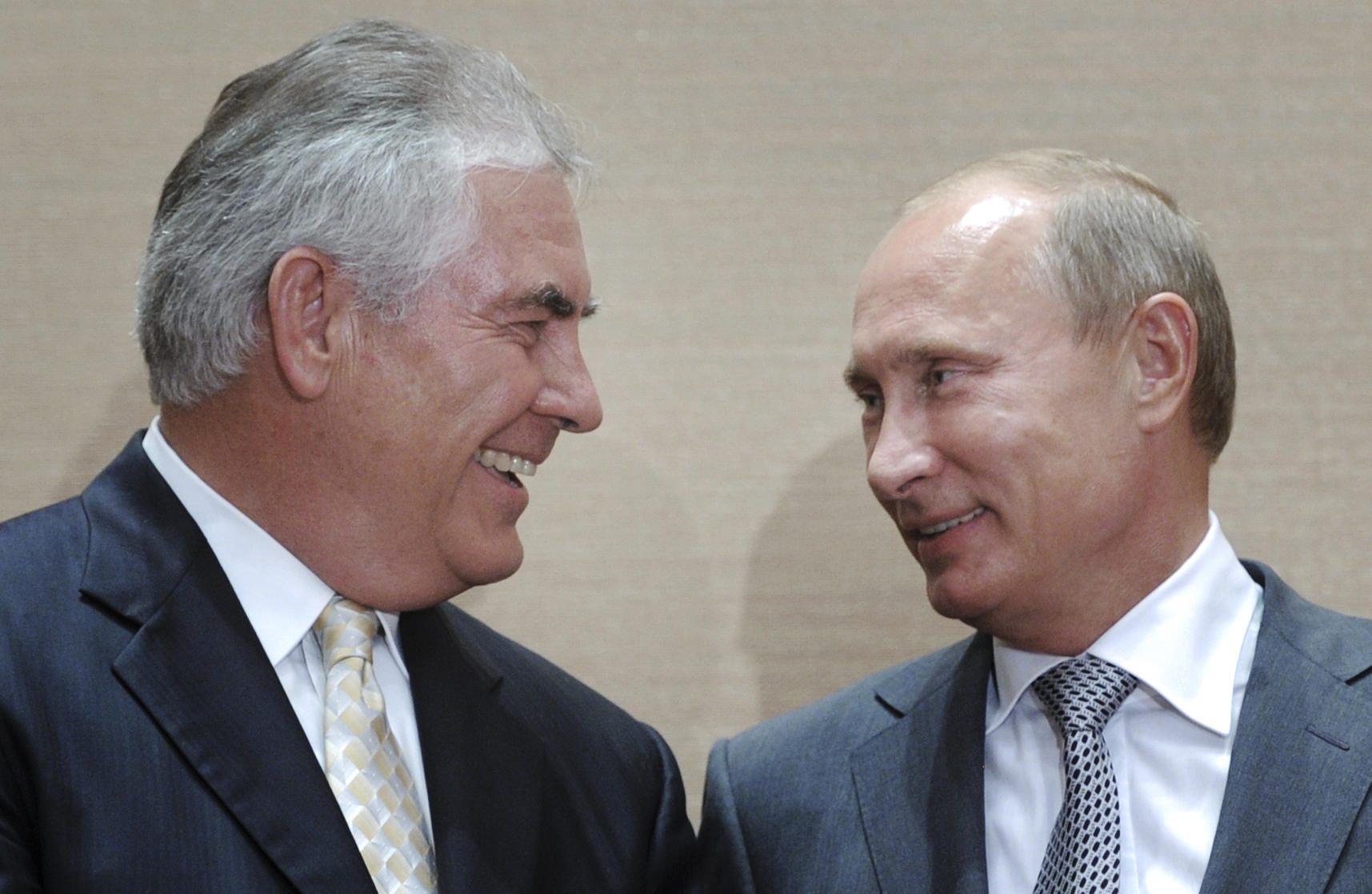 WASHINGTON -- If there’s one thing Republicans and Democrats have agreed on in foreign policy, it is the power of sanctions. But Donald Trump’s choice for secretary of state has seen things differently.

Exxon Mobil CEO Rex Tillerson, who has said he has a close relationship with Russian President Vladimir Putin, opposed the sanctions levied on Moscow following its annexation of Ukraine’s Crimean Peninsula in 2014. They cost the company hundreds of millions of dollars.

At his company’s 2014 annual meeting, Tillerson stated flatly: “We do not support sanctions, generally, because we don’t find them to be effective unless they are very well implemented comprehensibly and that’s a very hard thing to do.”

In Washington, both parties have supported sanctions against foreign governments, including sanctions that pressured Iran into nuclear concessions and pushed Myanmar to make democratic reforms.

It’s not clear if Tillerson’s view will change if he shifts from representing a $350 billion multinational company to becoming America’s top diplomat. His position seems to put him at odds with Trump, who has favored some sanctions.

Tillerson likely will be grilled about his views on sanctions at his Senate confirmation hearings, where he’ll also face questions about his relationship with Putin.

Trump has made clear he wants to avoid U.S. military interventions like those in Libya or Iraq. With sanctions off the table as well, he would not have many tools left to carry out his plans to “make American safe and respected again.”

A look at the use of sanctions and Tillerson’s and Trump’s positions:

Sanctions were used most prominently against Iran during President Barack Obama’s presidency. He had bipartisan support for them as an alternative to using military force to prevent Tehran from developing nuclear weapons.

In the years that followed, Iran elected a pro-negotiation president and agreed to sharply restrict its nuclear activity in exchange for an end to many sanctions.

To Obama, the sanctions had succeeded. To Trump and fellow Republicans, they were lifted prematurely and traded in for too little in return.

There was greater consensus on the success of sanctions in Myanmar. America’s carrot-and-stick approach pushed the country into democratic transition after decades of domination by a military junta.

In Syria, the U.S. had initial success drying up the reserves of President Bashar Assad’s government as it waged a civil war against rebel groups. Credit from Iran and military support from Russia reversed Assad’s fortunes.

Decades of sanctions failed to force change in Cuba. Obama unilaterally ended some of them. An array of sanctions has failed to end North Korea’s nuclear weapons program.

And after Russia seized Crimea and supported separatist rebels in eastern Ukraine, U.S.-led sanctions contributed to Russia’s economic downturn. Moscow has kept control of Crimea, however, and a deal to end the fighting in eastern Ukraine remains unfulfilled.

Sanctions create winners and losers, and Exxon was a loser.

Tillerson, who has spoken of his almost two-decade relationship with Putin, saw his company’s stake in a lucrative offshore drilling project with the Russian state oil company Rosneft under threat. He made numerous White House visits, to no avail.

The new U.S. sanctions banned the transfer to Russia of advanced offshore and shale technology, and Exxon was ordered to stop drilling in the Kara Sea, leaving the site’s potential riches untapped. Tillerson’s main partner, Rosneft boss Igor Sechin, was added to a U.S. sanctions blacklist.

Of his lobbying effort against sanctions, Tillerson said “we always encourage the people who are making those decisions to consider the very broad collateral damage of who are they really harming.”

Tillerson has spoken of his desire to see the sanctions lifted, which would benefit him and Exxon. Exxon valued Tillerson’s compensation in 2015 at $27.3 million, most of it in stock, while he held awards worth almost $150 million.

Trump hasn’t shied away from threatening to use sanctions. And he’ll have the power to implement them.

Because of the dollar’s status as the world’s reserve currency, Trump will have broad authority to cut off countries from global financial flows and investment channels at the stroke of a pen. And he will have a Congress eager to assert a role in foreign policy by helping him.

Trump has spoken about hardening sanctions on Iran and potentially reopening talks with Cuba to secure a better deal.

But his biggest test could be Russia, a country with which Trump has said he wants to improve ties.

Russia hasn’t been swayed by sanctions, but they have hurt, largely because of the participation of European countries with significant trade relationships with Russia. That has been largely due to U.S. pressure. But European governments and their companies - including Exxon’s competitors - are growing weary with the campaign. Trump hasn’t said if he will press the matter with the same vigor.

If Trump and Tillerson create a foreign policy without sanctions, they could lack the sticks to advance U.S. interests.

The president-elect repeatedly has expressed his disdain for military action outside of fighting terrorism. He has built a team with little track record in diplomacy. And it’s unclear if the power of his persona will carry weight across borders as he pushes his agenda internationally.