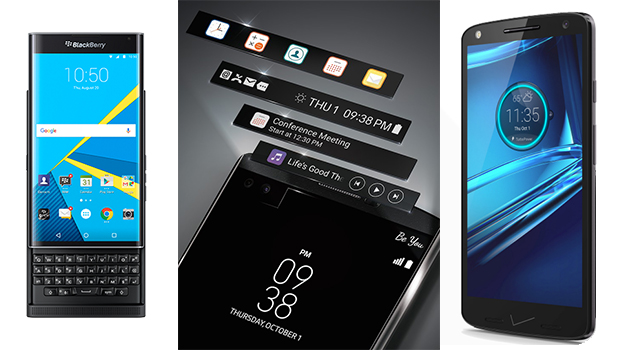 New Android phones appear with regularity, but far too few of them really seem ... new.

Sure, cameras keep getting better and phones keep getting faster. For the most part, though, you'd be hard-pressed to single out many new features that aren't just tweaks for the sake of tweaking. Though manufacturers frequently customize Google's Android software to set their phones apart, those alterations often just make things worse by hiding features or breaking some apps.

So it's a delight to see three phones with unusual characteristics in their hardware - all released over just nine days.

BlackBerry has struggled to make its BlackBerry 10 phone software a viable alternative to Apple's iPhone and Google's Android. While the company isn't giving up on BlackBerry 10, it's also hedged its bets with its first Android phone.

The new Priv has a physical keyboard, a rarity on Android phones these days. It looks like any other phone until you slide the keyboard out from the bottom, like a desk drawer. It's an engineering feat given that the phone still feels thin, although it's thicker than Samsung's flagship phones and the iPhone.

Typing on Blackberry's keyboard feels much better than it did on the original Motorola Droid in 2009. As my first smartphone, the keyboard model seemed safer given that I wasn't sold on its touch-screen counterparts. But on-screen keyboards have grown on me, and the Priv's physical keyboard slowed me down. Friends who've tried the new device, including former BlackBerry users, felt much the same way.

BlackBerry devices are known for their security and privacy protections, and the company built some of those features into the Priv's hardware. An app rates your device security based on factors such as whether you've enabled a passcode. This app also identifies other apps that grab personal information. I saw that Facebook has accessed my location 41 times in the past week, for instance.

Among other notable features:

- The 5.4-inch screen is curved on both sides, similar to Samsung's Galaxy S6 Edge devices. Slide a toolbar from the side to access your calendar, messages and contacts. The email app is also more sophisticated than most; it supports rich-text formatting, such as italics and colors, when composing messages.

- BlackBerry offers icons that serve as shortcuts to frequent tasks, such as composing a message, viewing alarms or checking data usage. Windows phones have a similar feature, but like BlackBerry 10, few people use them.

- Battery capacity is also higher than most phones. BlackBerry promises 22.5 hours of mixed use.

Motorola replaced glass with various forms of plastic to make its 5.4-inch screen shatter-proof. Most leading smartphones use chemically strengthened glass. But it's still glass, and it will crack if it hits a hard surface with enough force.

The shatter-proof technology allowed me to do careless things like leave the phone in a side pocket while getting a massage. Sure enough, it fell out - but the screen survived. It also withstood two intentional drops on a concrete sidewalk, including once face down from waist height. One corner of the metal frame was nicked, but the screen stayed intact.

SquareTrade, a company that provides extended-protection plans, subjected the Droid to 10 drops from six feet on Thursday, but found only minor dents to the screen. It then ran a Range Rover SUV over the phone 10 times. The screen still didn't shatter, though parts of the display turned black.

Motorola's warranty covers screen shattering and cracking for four years. The company tested the phone to withstand drops from five feet on various surfaces you'd normally encounter. Motorola added backup touch capacitors so that the screen would still respond to touch even with some damage.

Don't drop the phone from a five-story building, though. The screen might not crack, but other components could fail - and the warranty won't cover that.

It also won't cover scratches, which is a drag as plastic is, well, prone to scratching. For that reason, the Droid Turbo has two cover layers. The top one is replaceable using a do-it-yourself kit that sells for $30. Take care to keep the phone away from keys.

The phone also has extended battery capacity, promised at 48 hours of mixed usage. Using the included charger, Motorola says you can get 13 hours with 15 minutes of charging. The bigger battery does make the device thicker than most other phones.

Above the regular, 5.7-inch display is a tiny screen that's about the size of a pinkie bandage. It's a dedicated notification panel that won't obscure your main screen, though notifications still vanish after a few seconds. The second screen also offers quick access to settings, frequent contacts and recent apps.

That second screen is always on, allowing you to check the time and weather without wasting your battery by lighting up the main screen. You also get quick access to the flashlight and camera, plus playback controls for music.

The LG V10 has two front cameras - one for regular selfies, and one with a wide angle for groups. Other cameras do this by stitching together adjacent shots, similar to a panorama, but results can be spooky if people move. Meanwhile, the rear video camera offers a range of manual settings, something phones typically restrict to still images, if they offer them at all.

These features don't stand out as much as BlackBerry's or Motorola's, though it's great to see LG innovating.