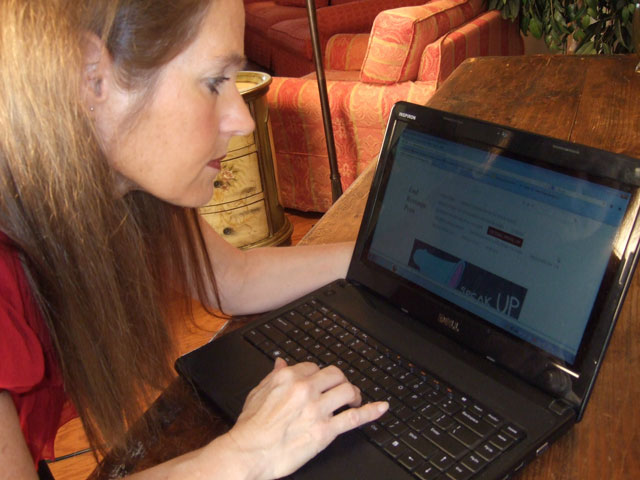 "I was sucked into it," says Laws, a former Los Angeles City Commissioner. "I was willing to do anything. I just wanted to get that picture down."

For two weeks, Laws devoted her entire life to just that. Laws says she sent take-down notices to the website, Google and Facebook saying the photo was obtained illegally. It would come down for a while, but, she says, it would keep popping back up.

"My husband was like, 'Don't worry, it'll go away eventually,'" she remembers. "But that's not what happens with the Internet. It just multiplies!"

Laws told CBS News' Crimesider that only after she got the FBI to open an investigation did the photo - and, eventually, the website that initially posted it - finally come down for good. But Laws was not done fighting. She and her family had gotten a hard lesson in the reality of what has come to be known as "revenge porn" - essentially, the posting of explicit photographs without the consent of the person in the image - and what she discovered was that there were thousands of victims of this practice but almost no recourse for them, since only one state had a law against the practice.

But change hasn't come easy. University of Miami Law School professor Mary Anne Franks tells Crimesider that a bill that would have made some kinds of revenge porn illegal in Florida died in committee in April. And while Laws says she's pleased that her home state has moved "in the right direction," she and other cyber-stalking advocates and experts say the California law has a gaping loophole: the statute does not cover photographs initially taken by the victim. So it wouldn't have helped Laws' daughter get justice. Neither would it apply to people who, for example, send an intimate photo of themselves to someone who then disseminates that image without their permission.

Franks says that this oversight is an example of the "victim-blaming" attitude many people have when it comes to intimate photos sent over electronic media. Danielle Citron, the author of the upcoming book "Hate 3.0: A Civil Rights Agenda to Combat Discriminatory Online Harassment," agrees.

The California statute has also been criticized for language stating that in order to run afoul of the law, the perpetrator must have distributed the image with "intent to cause serious emotional distress," rather than, as Yale Law fellow and Slate senior editor Emily Bazelon puts it, "treating the act of posting a sexual photo without consent as an objectively harmful invasion of privacy."

Jacobs says she went to multiple police agencies, and heard lots of different excuses for why they couldn't help her: she was over 18; she'd given the pictures to her ex so they were technically his property; they didn't have jurisdiction over Internet activity. She says she was even turned down by the FBI.

"I couldn't believe that it wasn't illegal," she told Crimesider. "I started to blame myself. I thought, if they don't recognize this as a crime, it must be my fault."

Although Jacobs says she definitely still hopes her ex "gets what he deserves" for what he did, she is now focused on helping other women who have endured similar trauma. She created a campaign and a website, EndRevengePorn.com.

"This is a form of sexual assault," says Jacobs. "Someone is violating you in a sexual way without your consent. And it doesn't just happen once. It happens over and over and over, every time you see a new picture, or get an email from someone who has seen you."

According to U-Miami law professor Franks, New Jersey's law is quite a bit better than California's, making non-consensual disclosure of an image - even if it was originally taken by the subject - illegal. Passed in 2004, Franks told Crimesider that the law made it possible for the state to prosecute Dharun Ravi for violating the privacy of his Rutgers roommate, Tyler Clementi, who committed suicide soon after finding out Ravi had recorded him having an intimate encounter with a man in the dorm room they shared.

And, in contrast to California's relatively minor maximum sentences for the crime, Frank says that in New Jersey the crime is punishable by three-to-five years in prison and a $30,000 fine.