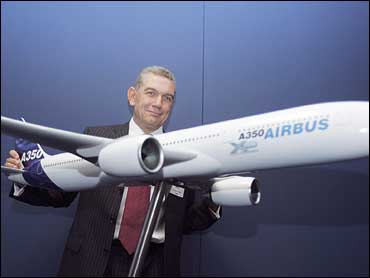 Airbus, reeling from a management shakeup that followed delays in its flagship superjumbo jet program, unveiled a long-awaited revamp of its mid-sized A350 on Monday.

The plane will be called the A350XWB for "extra-wide body," the company announced at Britain's Farnborough Air Show, one of the biggest events in the aeronautical industry.

"This is an entirely new design, without compromise and using all the latest technology," said new Airbus CEO Christian Streiff. He said the company will begin taking firm orders in October and the plane will enter service in mid-2012.

A redesign was long expected for the plane, which was billed as a rival to Boeing Co.'s long-range, fuel-efficient 787. The A350 had won just 100 orders compared to 360 firm orders for the 787.

Tom Enders, the joint CEO of Airbus parent European Aeronautic Defence and Space Co., had confirmed this weekend that the company would announce the revamp at Farnborough, increasing its development cost to about $10 billion from the previously estimated $5.7 billion.

Airbus has been struggling to get back on track since the announcement last month of a further seven-month delay to its A380 superjumbo program sent EADS shares plunging and led to the departure of Airbus Chief Executive Gustav Humbert and EADS co-CEO Noel Forgeard.

The European plane maker also reported last week that its sales fell by more than half in the first six months of the year to 117 planes, compared to rival Boeing's 480 orders for the same period.

"Yes, Airbus is in the middle of a serious crisis in our relationship with our customers. Yes, this is something we are taking extremely seriously inside Airbus, and yes, we know the competition is taking advantage of this today," Streiff said at a news conference following a presentation from Boeing.

Seeking to reassure customers and investors that Airbus is on the road to recovery, Streiff said that he would personally oversee "all aspects" of the new A350XWB program over the next three months.

He also reaffirmed the company's faith in the 555-seat A380 superjumbo, which is taking part in the daily flying displays here.

"It's a great aircraft, it is performing very well in test flights and in the certification process," he said.

Boeing also said Indonesia's Lion Air exercised its right to buy an additional 30 737-900 extended range aircraft in a deal valued at more than $2.2 billion. Boeing said it would deliver the aircraft beginning in early 2010 through 2012.

LoadAir Cargo, a new air freight operation based in Kuwait, said it had signed an order with Boeing for two 747-400 extended range freighters in a deal valued at $494 million. The deliveries are scheduled for early 2009.

Airlines were expected to announce new plane purchases from both plane makers during the show.

Boeing Commercial Airplanes CEO Alan Mulally said the company is talking to 25 potential buyers for the 747-8, a larger version of its jumbo developed in response to the A380.

He declined to identify the airlines but said many already operated 747s. "You can just look down the 747 fleets and see who they are," he said.

Mulally said that the company would reveal more detail on its order backlog, including the second quarter, when it releases earnings figures next week.

Boeing acknowledged Sunday that its 787 Dreamliner is overweight and experiencing delays with some suppliers — while stressing that the jet remains on budget and on schedule.

"We're a little over where we want to be at this time on weight, but ahead of where we were on previous programs, so we're really focused on weight-efficient structure right now," Mulally said at a briefing for reporters in London.

"Some partners are a little behind on the schedule but we're working with them on recovery plans to catch up," he said.

Mulally declined to specify where the problems were occurring but emphasized that the plane remains on course for its first flight in mid-2007 and entry into service the following year.

Boeing does not communicate development costs for its aircraft, reported to have cost about $9 billion. Company spokesman Charlie Miller said the supply and weight issues alluded to by Mulally would not affect the program's budget or delay the schedule.

On the defense schedule, Boeing's F-15 and F/A-18 fighters will be on display at Farnborough, as will Russia's MiG-29OVT jet, the Eurofighter Typhoon and Saab AB's Gripen.

Lockheed Martin Corp. will give an update on the F-35 Joint Strike Fighter, which is scheduled to begin test flights in October in Texas and be ready for use by the U.S. Marine Corps in 2012.