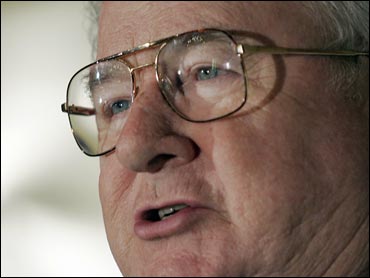 The Rev. Jerry Falwell was stricken at his campus office and died Tuesday after a career in which the evangelist used the power of television to transform the religious right into a mighty force in American politics. He was 73.

The founder of the Moral Majority was discovered without a pulse at Liberty University and pronounced dead at a hospital an hour later. Dr. Carl Moore, Falwell's physician, said he had a heart condition and presumably died of a heart rhythm abnormality.

Driven into politics by the 1973 Supreme Court ruling that established the right to an abortion, Falwell founded the Moral Majority in 1979.

Falwell credited the Moral Majority with getting millions of conservative voters registered, aiding in Reagan's victory and giving Republicans control of the Senate.

"I shudder to think where the country would be right now if the religious right had not evolved," he said when he stepped down as Moral Majority president in 1987.

Fellow TV evangelist Pat Robertson, himself a one-time GOP candidate for president, declared Falwell "a tower of strength on many of the moral issues which have confronted our nation."

Read more about the life of Jerry Falwell.

Who's Who: Falwell Remembered

It was the end of a professional life that began in 1956 with a small church in an abandoned bottling plant that grew to 22,000 members, while Falwell himself grew into one of the most influential men in America, reports CBS News correspondent Richard Schlesinger.

By the time Falwell left the Moral Majority in 1987, adds Schlesinger, the organization had enlisted 6.5 million members and raised about $69 million.

The rise of Christian conservatism — and the Moral Majority's full-throated condemnation of homosexuality, abortion and pornography — made Falwell perhaps the most recognizable figure on the evangelical right, and one of the most controversial ones, too.

Over the years, Falwell waged a landmark libel case against Hustler magazine founder Larry Flynt over a raunchy parody ad, and created a furor in 1999 when one of his publications suggested that the purse-carrying "Teletubbies" character Tinky Winky was gay.

Read some of Jerry Falwell's most memorable quotations.

Matt Foreman, executive director of National Gay and Lesbian Task Force, extended condolences to those close to Falwell, but added: "Unfortunately, we will always remember him as a founder and leader of America's anti-gay industry, someone who exacerbated the nation's appalling response to the onslaught of the AIDS epidemic, someone who demonized and vilified us for political gain and someone who used religion to divide rather than unite our nation."

The 1980s marked the religious conservative movement's high-water mark. In more recent years, Falwell had become a problematic figure for the GOP. His remarks a few days after Sept. 11, 2001, essentially blaming feminists, gays and liberals for bringing on the terrorist attacks drew a rebuke from the White House, and he apologized.

Falwell's declining political star seemed apparent when he was quietly led in and out of the Republican Party's 2004 national convention. Just four years earlier, he was invited to pray from the rostrum.

The big, blue-eyed preacher with a booming voice started a fundamentalist church in an abandoned bottling plant in Lynchburg in 1956 with just 35 members. He built it into a religious empire that included the 24,000-member Thomas Road Baptist Church, the "Old Time Gospel Hour" carried on TV stations around the country and 9,600-student Liberty University, which Falwell founded in 1971 as Lynchburg Baptist College.

From his living room, he broadcast his message of salvation and raised the donations that helped his ministry grow.

"He was one of the first to come up with ways to use television to expand his ministry," said Robert Alley, a retired University of Richmond religion professor who studied and criticized Falwell's career. Alley died last summer.

Falwell had once opposed mixing preaching with politics, but changed his views. The Moral Majority grew to 6.5 million members and raised $69 million as it supported conservative politicians and railed against abortion, homosexuality, pornography and bans on school prayer.

Falwell became the face of the religious right, appearing on national magazine covers and on talk shows. In 1983, U.S. News & World Report named him one of 25 most influential people in America.

"Jerry's passions and convictions changed the course of our country for the better over the last 20 years," said James Dobson, founder of the conservative Christian Focus on the Family ministry. "It was Jerry who led an entire wing of Christianity, the fundamentalist wing, away from isolation and into a direct confrontation with the culture."

"Dr. Falwell was a man of distinguished accomplishment who devoted his life to serving his faith and country," said Sen. John McCain, a GOP presidential contender who during the 2000 primaries referred to Falwell and Robertson as "agents of intolerance." McCain has since distanced himself from those comments.

In 1984, Falwell sued Hustler for $45 million, charging that he was libeled by an liquor-ad parody that quoted him as saying he lost his virginity to his mother in an outhouse.

A federal jury found the fake ad did not libel him, but awarded him $200,000 for emotional distress. The verdict was overturned in a landmark 1988 U.S. Supreme Court decision that held that even pornographic spoofs about a public figure enjoy First Amendment protection.

With Falwell's high profile came frequent criticism, even from fellow ministers. The Rev. Billy Graham once rebuked him for political sermonizing on "non-moral issues."

Falwell quit the Moral Majority in 1987, saying he was tired of being "a lightning rod" and wanted to devote his time to his ministry and Liberty University. But he remained outspoken and continued to draw criticism for his remarks.

In 1999, he told an evangelical conference that the Antichrist was a male Jew who was probably already alive. Falwell later apologized for the remark but not for holding the belief. A month later, his National Liberty Journal warned parents that Tinky Winky, the children's TV character, was a gay role model and morally damaging to children.

Falwell was re-energized after family values proved important in the 2004 presidential election. He formed the Faith and Values Coalition as the "21st Century resurrection of the Moral Majority," to seek anti-abortion judges, a constitutional amendment banning gay marriage and more conservative elected officials.

In 1987, Falwell took over the PTL (Praise the Lord) ministry in South Carolina after the Rev. Jim Bakker got caught in a sex and money scandal. Falwell slid fully clothed down a theme park water slide after donors met his fundraising goal to help rescue the rival ministry. He gave it up seven months later after learning the depth of PTL's financial problems.

Largely because of the sex scandals involving Bakker and fellow evangelist Jimmy Swaggart, donations to Falwell's ministry dropped from $135 million in 1986 to less than $100 million the following year. Hundreds of workers were laid off and viewers of his television show dwindled.

Liberty University was $73 million in debt and on the verge of bankruptcy, and his "Old Time Gospel Hour" was $16 million in debt. By the mid-1990s, two local businessmen with long ties to Falwell began overseeing the finances and helped get companies to forgive debts or write them off.

Falwell dreamed that Liberty would grow to 50,000 students and be to fundamentalist Christians what Notre Dame is to Roman Catholics and Brigham Young University is to Mormons.

Falwell's father and his grandfather were militant atheists, he wrote in his autobiography. He said his father made a fortune off his businesses, including bootlegging during Prohibition.

As a student, Falwell was a star athlete and a prankster who was barred from giving his high school valedictorian's speech after he was caught using counterfeit lunch tickets.

He ran with a gang of juvenile delinquents before becoming a born-again Christian at 19. He turned down an offer to play professional baseball and transferred from Lynchburg College to Baptist Bible College in Springfield, Mo.

"My heart was burning to serve Christ," he once said in an interview. "I knew nothing would ever be the same again."

Falwell had made careful preparations for a transition of his leadership to his two sons, Jerry Falwell, Jr., now vice chancellor of Liberty University, and Jonathan Falwell, executive the pastor of Thomas Road Baptist Church.

Falwell is survived by his wife, Macel, his two sons and a daughter, Jeannie Falwell Savas. Funeral arrangements were not immediately known.

Former Massachusetts Gov. Mitt Romney, a Mormon whose own faith has become an issue during his run for the presidency, said Falwell "built and led a movement based on strong principles and strong faith," and "the legacy of his important work will continue through his many ministries where he put his faith into action."