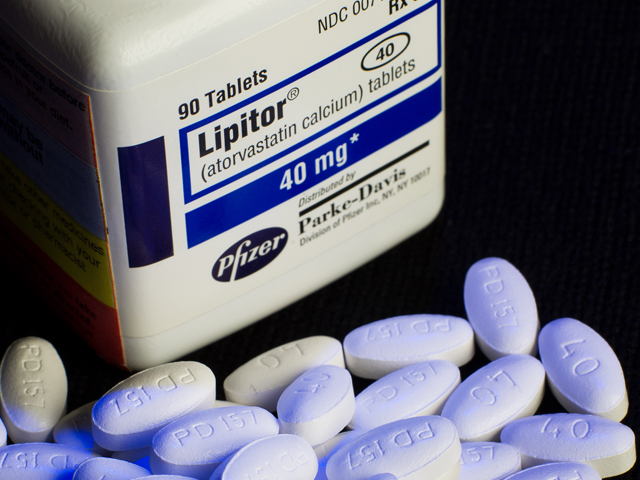 Lipitor, the world's top-selling drug ever, had peak sales of nearly $13 billion a year several years ago. Sales dropped sharply after it got U.S. generic competition on Nov. 30.

The suit accuses Pfizer of patent fraud as well as "illegal, anti-competitive conduct" with generic drugmaker Ranbaxy Laboratories of India to block other generic drugmakers from selling versions of Lipitor, called atorvastatin calcium, until recently.

Pfizer denies the lawsuit claims and said Friday that it "will defend itself vigorously." A spokesman for Ranbaxy said the company had not been served with the lawsuit and has a policy against commenting on pending litigation.

The plaintiffs, which include Safeway Inc., Supervalu Inc. and HEB Grocery Co. LP, claim the original patent for the active ingredient in Lipitor expired in March 2010 and that Pfizer fraudulently got the U.S. Patent and Trademark Office to grant a follow-on patent that extended Pfizer's monopoly on Lipitor sales.

According to Pfizer, Lipitor has additional patents that run until 2017, in addition to the patent in question in the lawsuit.

The plaintiffs also accuse Pfizer and Ranbaxy of striking a deal to delay competition from other generic versions of Lipitor. Ranbaxy got a six-month window through the end of May when it sold generic Lipitor and the only other generic version on the market was an authorized one - pills manufactured by Pfizer and sold by its partner, Watson Pharmaceuticals Inc.

The lawsuit claims that due to the defendants' "scheme to delay and suppress generic Lipitor competition, in whole or in part, plaintiffs have paid hundreds of millions of dollars more for atorvastatin calcium than they would have paid absent such conduct."

Pfizer's revenue from brand-name Lipitor fell about 40 percent in the first quarter of this year, to $1.4 billion. That amount likely would have dropped more, if Pfizer had not offered the discounts to prescription benefit managers, along with copayment cards that helped about 750,000 patients to stay on brand-name Lipitor for just $4 per month.

The plaintiffs are seeking triple damages plus court and attorney costs. Their attorney, Deborah S. Corbishley of Miami, did not immediately respond to a request for comment.