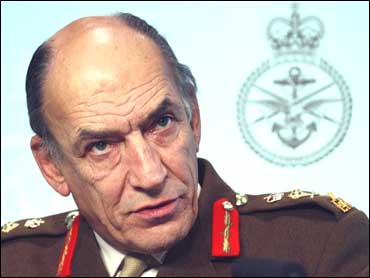 The head of the British army during the Iraq invasion described former Defense Secretary Donald Rumsfeld's approach as "intellectually bankrupt," according to comments published Saturday.

Gen. Sir Mike Jackson, who retired in August 2006 as chief of the general staff, said Rumsfeld was "one of those most responsible for the current situation in Iraq," in excerpts from an autobiography, "Soldier," that were published by The Daily Telegraph.

He writes that Rumsfeld refused to deploy enough troops following the collapse of Saddam Hussein's regime to maintain law and order, and rejected the State Department's plans for post-invasion administration of the country. Jackson is also critical of President Bush for handing control of post-invasion Iraq to the Pentagon. "All the planning carried out by the State Department went to waste," he writes.

For Rumsfeld and his supporters "it was an ideological article of faith that the coalition soldiers would be accepted as a liberating army," Jackson wrote.

In his book, which the newspaper will serialize starting Monday, Jackson also criticizes the U.S. approach toward tackling global terrorism as inadequate, accusing Washington of relying too heavily on military power at the expense of nation building and diplomacy.

In "Soldier," Jackson also writes how he and other senior officers in the British military doubted the Blair government's charges of Iraq possessing weapons of mass destruction in 2002, or the claim that the U.K. was directly threatened with attack.

"We all knew that it was impossible for Iraq to threaten the U.K. mainland," he writes. "Saddam's Scud missiles could barely have reached our bases on Cyprus, and certainly no more distant target."

Jackson's comments were the most outspoken criticism of U.S. policy in Iraq yet by a senior British officer. Previously he had warned that British troops faced fierce combat in Iraq and Afghanistan without adequate resources or government support.

Last year, Gen. Richard Dannatt, the current head of all three of Britain's armed forces, called for his troops to be withdrawn from Iraq soon, saying their presence was provoking rather than preventing violence.

Rumsfeld stepped down as defense secretary in November, one day after midterm elections in which opposition to the war in Iraq contributed to heavy Republican losses. Later at his goodbye ceremony, he took a slap at advocates of an early withdrawal of U.S. troops from the Iraq war.

"It may well be comforting to some to consider graceful exits from the agonies and, indeed, the ugliness of combat," he said. "But the enemy thinks differently."

In an interview with the Telegraph on Saturday, Jackson also defended British forces' performance in southern Iraq, dismissing charges made by a U.S. general last month that Britain had allowed deteriorating security in southern Iraq to get worse.

"I don't think that's a fair assessment at all," Jackson was quoted as saying.

He said Britain's mission was to hand security responsibilities to Iraqis once the coalition and Iraqi authorities were satisfied they were capable of taking over.

Britain has successfully handed over three of four southern provinces to Iraqi forces, he said. Officials say London hopes to pass control of Basra, the remaining district, to local forces by the end of the year.