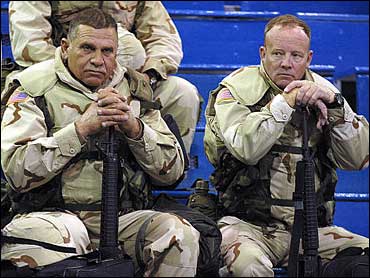 Army National Guard troops from North Carolina and Arkansas are preparing to mobilize for active duty in Iraq in the next two weeks, the Pentagon announced.

The Defense Department also announced Friday that the Washington National Guard's 4,300-member 81st Enhanced Infantry Brigade was on alert - its second time in eight months - meaning its members were warned to begin planning for possible mobilization.

Thousands more could be put on alert within weeks unless certain other nations decide to contribute troops for security duty, a top Pentagon general said last week.

Pending and possible call-ups create stress and problems galore for reservists, many of whom thought being in the Reserves was a one weekend a month, two week a year deal in exchange for numerous home front benefits.

Beth Fightmaster has two preschoolers, she's pregnant, and she's wondering whether her husband will be around to help out with the next round of late-night diaper changes. He's wondering, too.

Staff Sgt. Max Fightmaster, a computer technician, is one of thousands of Army National Guard and Reserve members who could soon be called up to active duty in Iraq.

If he goes, as he believes is likely, his wife will be left alone with the children as their baby's birth approaches in May. Their nearest relatives, her parents, live 90 minutes away.

"It's very stressful," she said. "But when I married him, I knew there was a chance this would happen. I hope I can help him keep his focus. I know he's extremely worried about leaving his children and his pregnant wife. I try to be strong."

For now, the Akron-area couple and other families around the country can only wait.

The U.S. military is relying on reservists to round out its forces in Iraq, with at least 20,000 reservists among its 130,000 troops. While the United States says it doesn't plan to increase its forces, it needs fresh troops to replace those going home.

Staff Sgt. Gloria Ludwig, a single mother in Denver, Pa., says if she is called up she will send her teenage son and daughter to live with her sister and brother-in-law, 20 minutes away, or ask the couple to move into her home.

"I would do as much as I could to keep their routine the same," said Ludwig, 38. But, she acknowledges, "It would be a huge burden on my sister."

Even little tasks have to be considered.

Sgt. 1st Class Richard Murphy's wife's 13-year-old son will have to learn a lot more about lawn maintenance and home repair. "It would really be a growing experience for him," said Murphy, of Dillsburg, Pa.

First Sgt. Michael Giersch, assigned to the 917th Corp Support Group based in Belton, Mo., said he has been preparing for the past year.

His wife, Sgt. 1st Class Elizabeth Giersch, is eight months pregnant with the couple's first son, and they also have five daughters. "It's like, 'holy cow, my son could be a year or two by the time I get back. That's the tough part," he said.

Soldiers who thought being in the Reserves was one weekend a month, two weeks a year, should come to grips that those days are over, he said.

"The Army has pushed the education component and that's why a lot joined," he said. "It's not going to be the case where you are in the Reserves for 10 to 20 years and not be deployed anymore."

Christina Lay, 27, spent most of last year in the Middle East and at Guantanamo Bay in Cuba, and she's torn about the prospect of once more leaving her husband and two children behind in Dayton.

"There's a certain pride in serving your country, but there is also a terrible sadness you feel knowing you're going to be away from your family again," she said.

Lay said indifference from the American public is harder to deal with than the personal uncertainties of the drawn-out conflict.

"People forget how many soldiers we have overseas," she said. "If it's not on the front page, people forget about us. That's the morale killer."

Beth Fightmaster said she has "mixed emotions" about the lingering situation.

"I know we need to be there to a point," she said. "I was hoping if my husband ever had to go over there, it would be for peacekeeping. But I'm not sure we're in the peacekeeping phase."

Still, she said, "if he goes over there and gets the job done, maybe no one else will have to go."