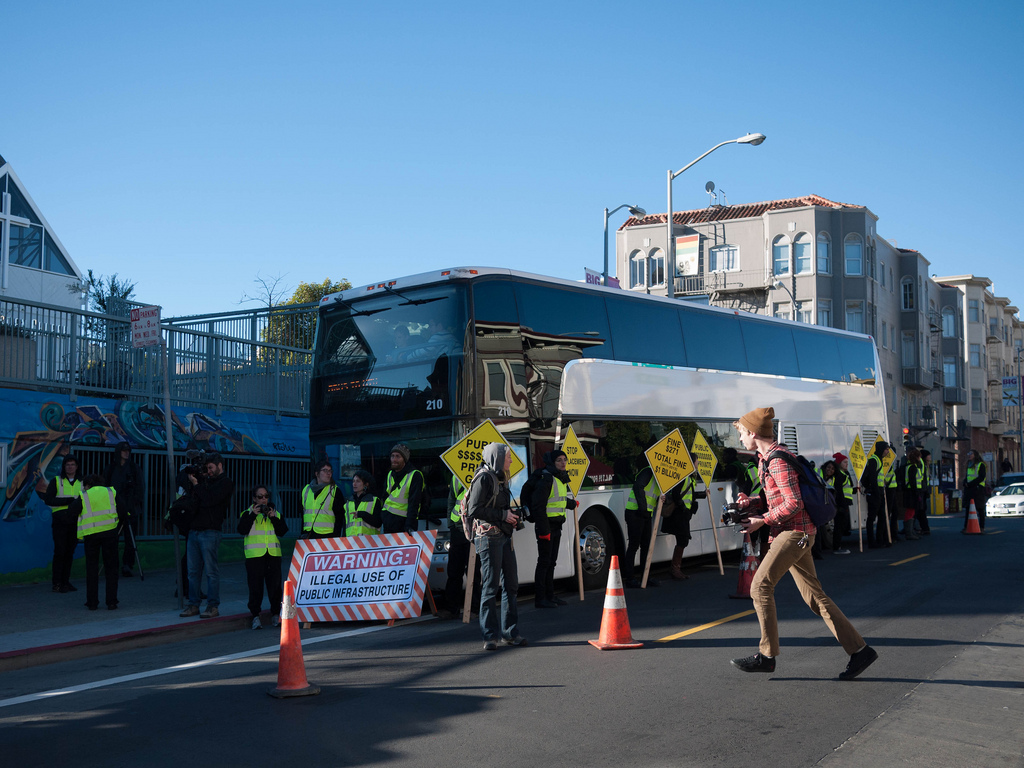 One of the employee perks offered by Google (GOOG) and other tech companies is free transportation across Silicon Valley.

From San Francisco to Santa Cruz, Calif., company buses shuttle workers to and from home, offering WiFi on the ride so people can work. And if you've ever suffered through a rush-hour commute in Silicon Valley, you know that an Internet-equipped bus ride home can be a wonderful relief.
But some residents have had it with wealthy tech employees getting bused in and out of their neighborhoods. Protesters who are tired of "tech-boom gentrification," as the SFGate Blog called it, have been surrounding and even blocking the shuttle buses.
In one case, protesters smashed a window and slashed the tires of a Google bus picking up employees in West Oakland. In a separate incident, several dozen activists surrounded a bus picking up Apple (AAPL) employees.
"We're here to send a message to the rich tech companies that their business has ramifications and consequences," one protester told SFGate.
The simmering resentment is clear. In Silicon Valley, many tech employees have become multimillionaires lately, as Facebook (FB), Twitter [TWTR] and other companies have gone public. The newfound wealth has sent rents and real estate prices soaring, and in some areas created a sharp divide between the haves and the have-nots.
It doesn't help that some in the city's tech sector have begun complaining about the city's more colorful inhabitants.
"There is nothing more grotesque than walking down [Market Street] in San Francisco," wrote Greg Gopman, CEO of AngelHack, on his Facebook page last month, Valleywag reports. "Why the heart of our city has to be overrun by crazy, homeless, drug dealers, dropouts, and trash I have no clue."
Gopman later deleted his post and apologized. But some long-time San Francisco residents are apparently wondering why the heart of the city has to be overrun with elitist, nouveau riche techies as well.
That friction is what turns an issue as seemingly minor as employee buses into a drama involving vandalism and protests.
Tech company buses make about 4,000 stops in San Francisco every day, using bus stops belonging to the city's transit system. And that has annoyed local residents because the shuttles clog San Francisco's narrow streets and get in the way of city buses.
City officials no longer want to give the private corporate buses a free ride, and have worked out a deal to charge Google [GOOG], Facebook, Apple [AAPL] and other companies a fee based on the stops their shuttles make. The city's transportation board is expected to vote on the plan later this month.
"In recent years we've seen a wild, wild West on our streets," David Chiu, president of the city's board of supervisors, told The Associated Press. "This is an important first step in bringing some order and rules to our roads, as well as asking our companies to pay a fair share of what it costs the city to maintain our streets."
The city is now designating only 200 of its bus stops as approved loading zones for tech shuttles. And drivers will now stay away from some narrow streets and yield to city buses. Google, for its part, has begun looking for other ways to move workers in from San Francisco. The company has begun testing high-speed catamarans as a way to transport employees.