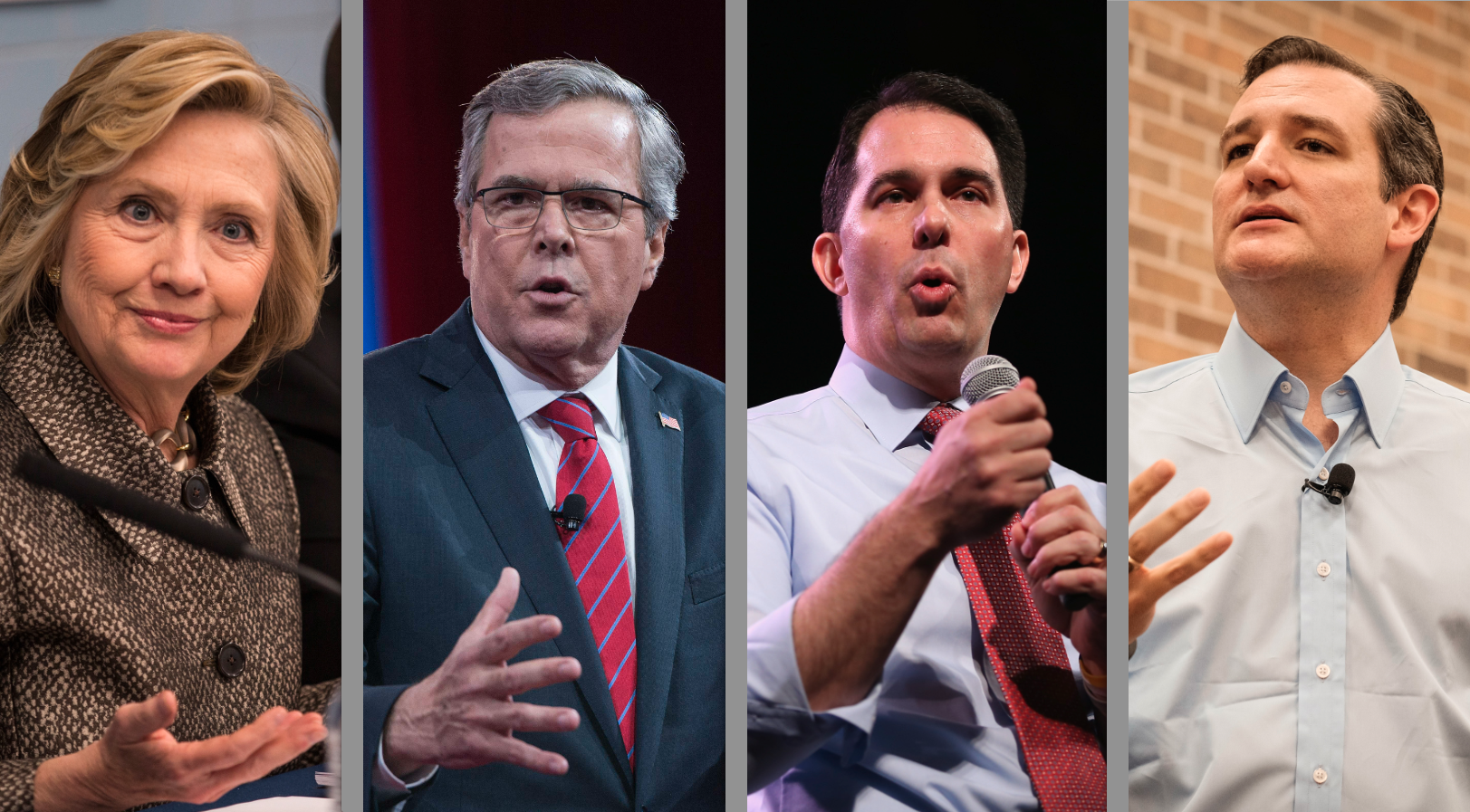 The reaction from the right to Hillary Clinton's announcement that she is running for president was swift, negative, and, some Republicans seem to hope, lucrative.

Just minutes after Clinton formally jumped into the 2016 raise, Wisconsin Gov. Scott Walker and former Florida Gov. Jeb Bush - neither of whom has formally declared his own candidacy for president - emailed their supporters asking for contributions ranging from $5 to $250 to help them beat the former secretary of state.

"Moments ago Hillary Clinton officially announced her White House bid - and it's up to us to stop her. I'm going to be straightforward with you, this isn't going to be easy," Bush wrote. "Hillary plans to raise $1.7 billion to win the White House and she already has 135,000 donors at the ready. But I wouldn't be asking if I didn't know you were up for it, which is why I'm asking you to give $5 right now to stop her. Every dollar you give goes directly to fighting her Liberal agenda and ensuring we don't suffer another 4 years of Democrat control."

Walker wrote: "Despite a meticulously crafted new persona, perpetual candidate Hillary Clinton represents all of the failed policies that Washington has been churning out for too long. Washington isn't working. Wisconsin is. Please stand with a proven conservative today. Support Friends of Scott Walker with $10, $35, $50, $100, or even $250 to show your support for our conservative successes and vision for the future."

Texas Republican Sen. Ted Cruz, who has already announced he is running, released a video on Twitter appealing to his supporters to visit his site and make a donation. "Does America want a third Obama term, or are we ready for strong conservative leadership to make America great again? Please visit tedcruz.org and make a contribution, sign up to volunteer and stand together to turn this country around," he says.

A more creative approach came from the other declared Republican candidate, Kentucky Sen. Rand Paul, who is selling anti-Hillary swag on his campaign website. The merchandise for sale includes a nearly $100 hard drive labeled "Hillary's hard drive," a nod to the scandal over Clinton's use of a private email server and personal email address while she was secretary of State. The drive is marked "Heavy use" and "now perfectly clean." The site says it is a "limited edition" item and just 80 are available.

Other Republicans simply used their statements - which arrived in quick succession - to slam Clinton and declare her unfit to lead the nation.

"I think our nation is at a pivotal time, so anyone who wants to be president or commander-in-chief needs a track record of leadership and accomplishment and trustworthiness. Hillary Clinton is a highly intelligent woman, hardworking, she's dedicated her life to public service. But unfortunately, she does not have a track record of accomplishment or transparency," Carly Fiorina, the former Hewlett-Packard CEO and failed Senate candidate, said in a Facebook video. "She doesn't have a track record of leadership or trustworthiness. She's not the woman for the White House."

Former Pennsylvania Sen. Rick Santorum cited his own personal experience serving with Clinton in the Senate and sought to undercut her message that she will be fighting for the middle class.

"Hillary Clinton does not have the right vision to lead America," he said in a statement. "I believe we need a President who puts the American worker first, not the corporate interests the Clintons have aligned with. I believe we need a President who stands up for the 75% of Americans who will never earn a college degree, not the government bureaucrats who are dictating policy from Washington, DC offices."