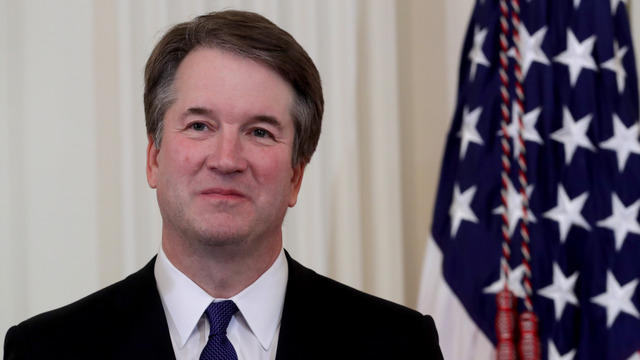 The political showdown over President Trump's nominee for the Supreme Court, Brett Kavanaugh, began almost as soon as his name was announced. A handful of moderate Republicans and red-state Democrats will likely determine if Kavanaugh is confirmed.

Dan Senor, a Republican strategist who worked with Kavanaugh in the George W. Bush administration, told "CBS This Morning" that Kavanaugh is more mainstream than some of his critics suggest.

"The reality is, he's not some firebrand right-winger," Senor said. "You can't put him in that box. Eleven of his opinions have been adopted by the U.S. Supreme Court. Seven of his clerks have gone on to clerk for Justice Kennedy. Kennedy was his mentor. He's not some right-wing extremist."

"If you listen to Kavanaugh last night, his acceptance speech was basically a letter to Collins and Murkowski," Senor said. "'My daughters, look how involved I am in my daughters' lives,' a tribute to his mother — he basically reminded me of the 'binders full of women'" by calling out how many women he's hired over the years.

Kavanaugh is the second Supreme Court nomination President Trump has brought forward. Neil Gorsuch was confirmed last year with the support of several Democrats, but Senor says this time will be different.

"There is some concern amongst some in the senate, Republicans, that the White House, or at least the president, doesn't fully appreciate how different this is than the Gorsuch situation," Senor said. "In other words, when Gorsuch was put through the system, the Republicans had had a 52-48 majority; now they effectively have 50-49 because they lost the Alabama Senate race and John McCain isn't gonna be able to vote. So it's a narrower margin."

The three Democrats who voted for Justice Gorsuch — Joe Manchin of West Virginia, Heidi Heitkamp of North Dakota, and Joe Donnelly of Indiana — said they will review Kavanaugh's record. Senor said there will be even more pressure on them this time around.

"There will be enormous pressure on them," Senor said. "I think the tension is the following: Trump is more popular in their states than Democratic leadership is, and if he decides to lean into this it's harder for these red-state Democrats. But the national fundraising arm of the left, all these center-left groups who care about this issue and think Roe v. Wade hangs in the balance here are going to be deploying huge amounts of money on these particular red-state Democrats, and I think they're gonna have to basically choose between those two."

Senor also said the philosophical makeup of the court and the base of the Democratic party will make Kavanaugh's confirmation tougher than the process was for Gorsuch.

"The Democrats are much more organized this time than they were during Gorsuch," Senor said. "And the pressure on the Democrats from the base is far higher now. If you listen to the base of the Democratic Party, they're saying, 'Do everything you can, Senator Schumer, to stop this.'"

Whiskey pulled over antifreeze ingredient, but not in U.S.