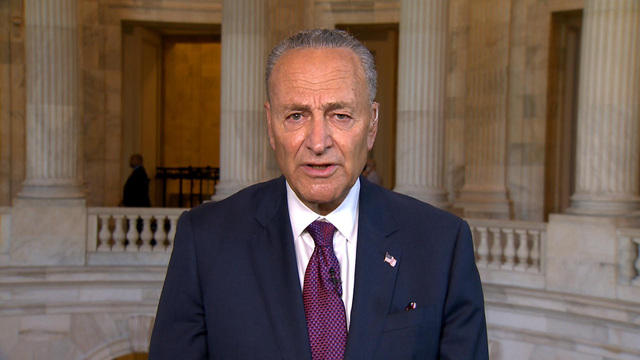 Sen. Chuck Schumer tells "CBS This Morning" that he will work to oppose President Trump's Supreme Court nominee Brett Kavanaugh with "everything I've got", adding that he's confident there will be a majority in the Senate that will do the same.

"President Trump with the nomination of Judge Kavanaugh has fulfilled two of his campaign promises -- first to undo women's reproductive freedom and second to undo the ACA (Affordable Care Act)," Schumer said.

His comments come after Mr. Trump made his primetime pick Monday evening of the Bush-appointed judge to fill the vacant seat on the Supreme Court left by Associate Justice Anthony Kennedy.

While Kavanaugh during previous confirmation hearings has said that he believes Roe V. Wade is "binding precedent of the court" and would follow such a ruling and not move to undo the landmark abortion case, Schumer called such a statement "a trick."

He added, "It's not good enough for them to hide behind the shibboleth that will follow existing law because when they get on the bench they change."

Schumer said that Kavanaugh would not have been put on the list of 25 candidates compiled for the president to select from by the Federalist Society, a conservative lawyers' group, "had he not been one of these hard right judges."

Schumer said he was confident that the Democratic party can "prove to the American people, which I believe is truly the case, that this nominee will lead to a court that repeals women's reproductive freedom, repeals ACA with its protections for pre-existing conditions, we'll get a majority of the Senate to vote for it."

He noted, "Obviously even if we had every Democrat, we need two Republicans, but if if we can make that case, we will get a majority."