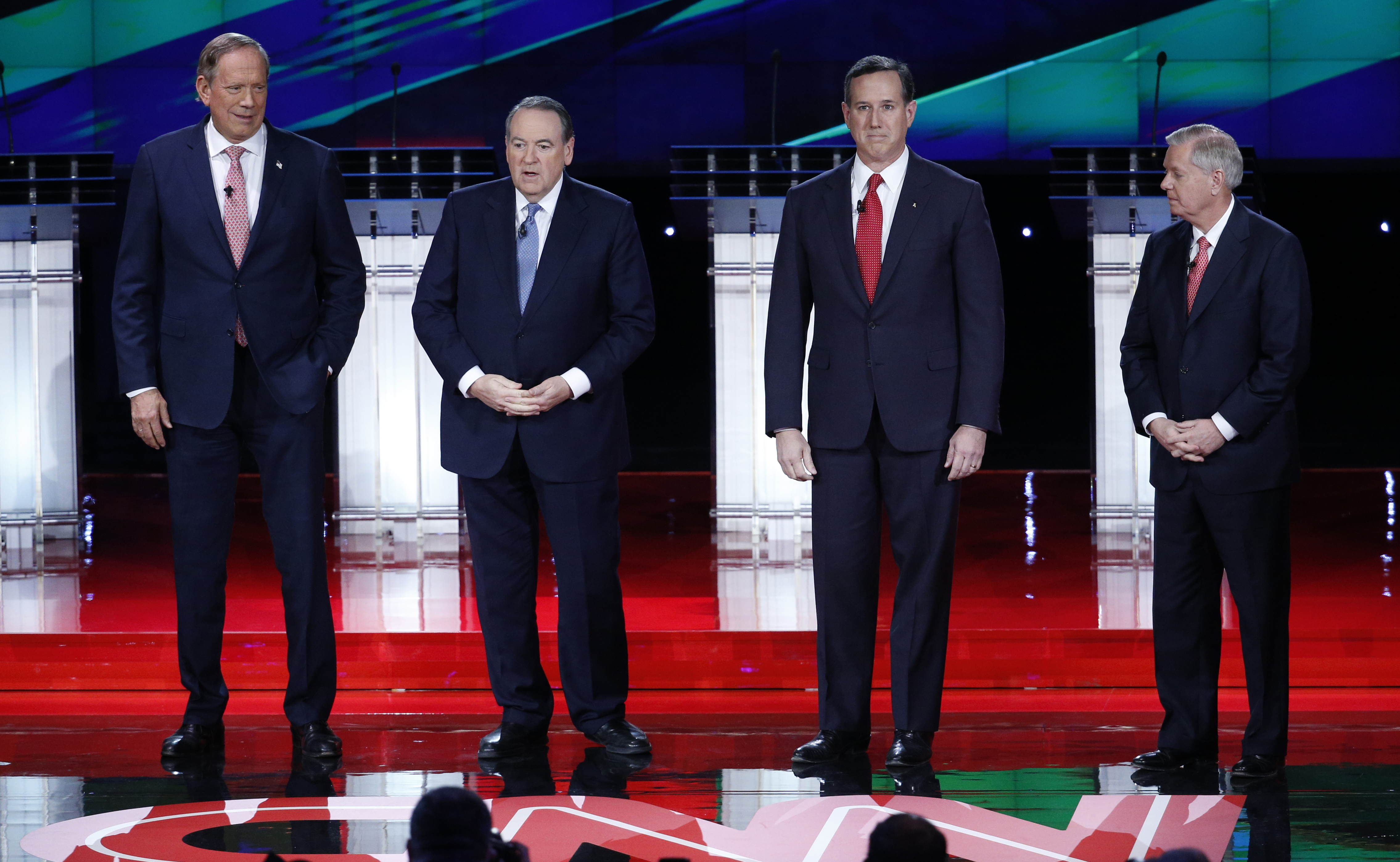 8:08 p.m. Closing statements: Graham says the next president will have to be a "war-time" president and says he's ready for that job. Pataki reminds viewers that he was governor of New York during the 9/11 attacks and says he has the ability to unite Americans. Santorum says he knows the face of evil and will defeat it. Huckabee says he would fight to make sure grandchildren have the opportunity to have faith and freedom.

8:01 p.m. Graham was asked whether he would sign onto the Gang of Eight immigration reform bill that he backed in 2013. At first, he initially dodged the question, but pushed further, he said he would make changes to the bill given the Paris terror attacks and the San Bernardino shooting.

7:56 p.m. Debate shifts to the Obama administration's plan to take in at least 10,000 Syrian refugees over the next year. Santorum and Pataki say it's "impossible" to adequately vet Syrian refugees coming into the U.S.

7:45 p.m. Santorum criticizes the Obama administration's new policy to open up U.S. combat positions to women. He said there were studies that indicated women weren't fit for combat.

Pataki defends the new policy, saying, "This is the 21st century."

7:39 p.m. After a brief debate over Russia's role in the fight against ISIS, Graham said, "The next 9/11 is coming from Syria and coming soon."

Candidates were asked whether they would reinstate the military draft. Graham and Huckabee said that wouldn't be necessary.

7:29 p.m. Graham says it's "absolutely imperative" that Syrian President Bashar al-Assad be removed from power. He then talked about Russian President Vladimir Putin.

"I'm not afraid of a guy riding around on his horse without his shirt," he said of Putin, and then also slammed Mr. Obama.

"I miss George W. Bush. I wish he were president right now. We wouldn't be in this mess," Graham exclaimed.

"He gave away everything we fought for and I hate what he did," he said.

The timeline for the pull-out, however, was the product of an agreement negotiated between President George W. Bush's administration and the Iraqi government.

Graham did not rule out also sending U.S. ground troops to Libya because he said ISIS now operates in nine countries.

7:16 p.m. Huckabee refuses to say how many U.S. troops he would deploy to fight ISIS because he said he wouldn't want to reveal limitations to the enemy. He was then asked if he still thinks it would only take 10 days to defeat the group.

"I sure want them to think we would," Huckabee said.

7:09 p.m. Candidates debate their proposed strategies to defeat ISIS. Santorum says he believes the terrorist group's caliphate would collapse if Sunni Muslims, the Kurds and the Peshmerga take back their land in Iraq.

Graham responds, "You're not going to win that way, Rick."

The South Carolina senator, who has offered an incredibly broad war authorization in Congress, argued during the debate for U.S. ground troops to fight ISIS.

"They're planning another 9/11 as we speak," Graham said about ISIS.

7:01 p.m. Graham chimes in: "There are at least 3,500 American Muslims serving in the armed forces. Thank you for your service. You are not the enemy. Your religion is not the enemy," he said, drawing applause from the audience.

6:59 p.m. Santorum says, "Islam is not just a religion. It's also a political governing structure."

6:57 p.m. The discussion turned to surveillance of mosques to root out radical Muslims in the U.S. Pataki said, "I think it's very important to prevent the radicalization of Americans right here." He said New York stopped dozens of attacks in the city because of their earlier program to monitor mosques.

Huckabee defended such a program, "No, it does not violate their First Amendment rights to go and listen to their sermons."

6:47 p.m. Former Sen. Rick Santorum, R-Pennsylvania, said Trump's plan to ban Muslims from U.S. was "not the right proposal," but he suggested Trump is on the right track.

"The reality is all jihadists are Muslims," he said.

Former Arkansas Gov. Mike Huckabee said he would prefer Trump as president instead of Clinton.

"I'd rather him be president than Hillary become president any day," he said.

6:43 p.m. Moderator Wolf Blitzer says polls shows most GOP voters back Trump's proposal to ban Muslims from entering the U.S. He asked the candidates what they would say to those voters.

Sen. Lindsay Graham, R-South Carolina, said, "You may think it makes us safe, but it doesn't" and his plan is "the worst possible thing he could do in this war."

Graham went on to say that if Trump wins the GOP nomination, he said he might "sleep late" on Election Day as Bob Dole has already said he would do in that scenario.

6:38 p.m. Candidates deliver opening statements and former New York Gov. George Pataki is on the offensive. He slammed President Obama for not admitting that radical Islam is causing a "crisis" in the United States. He blasted Democratic frontrunner Hillary Clinton for her proposed approach to fight the Islamic State in Iraq and Syria (ISIS).

"Neither is fit to be president of the United States," Pataki said of both Mr. Obama and Clinton.

6:30 p.m. The second tier of the candidates face off in the "happy hour" debate on CNN at the the Venetian hotel. They are Lindsey Graham, Rick Santorum and George Pataki and Mike Huckabee.

Moderators are expected to ask contenders about national security and terrorism in the wake of the Paris terror attacks and San Bernardino shooting.