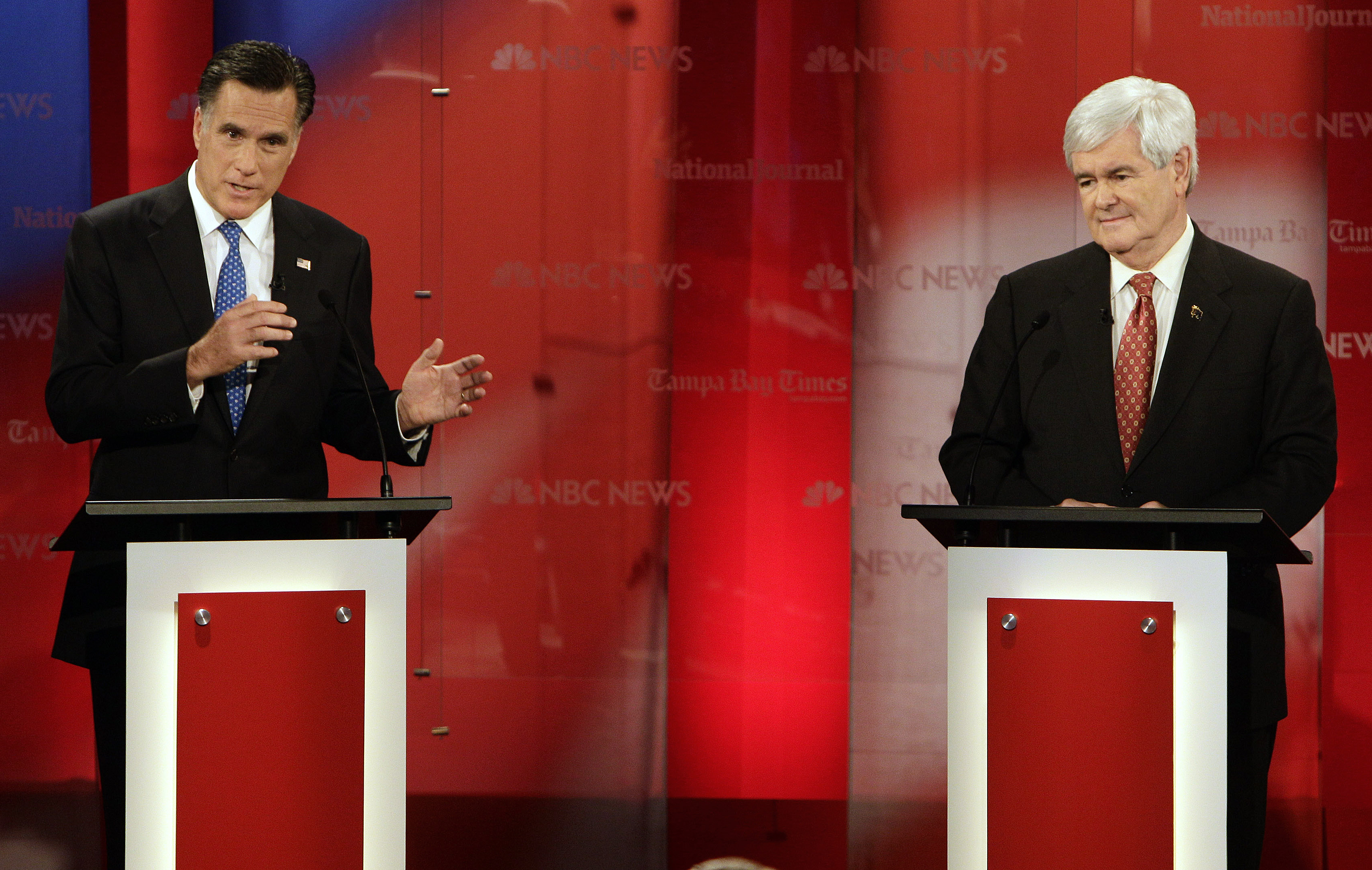 As the exit polls from South Carolina made abundantly clear, Newt Gingrich's presidential campaign is dependent on the notion that he is the candidate who can best take it to President Obama on the debate stage.

Gingrich, who garnered two separatestanding ovationsand made Mitt Romney look weak and equivocating in two debates last week, was uncharacteristically unable to generate a single memorable winning moment Monday night - in part because he didn't attack the media, which has been a reliable applause line for him in debates past.

And while Gingrich didn't bomb, he also wasn't the strongest debater on the stage Monday night. That honor goes to Romney, whose attacks put Gingrich on the defensive and even temporarily rendered the famously verbose former House speaker speechless for a few awkward moments.

That's not to say Romney had a great night - he continued to sound wishy-washy when discussing his decision about releasing his personal tax returns, though he smartly pivoted Monday night to a discussion of the shortcomings of the tax code more broadly. Romney's decision to cast his immigration policy in terms of "self-deportation" also didn't do him any favors.

But Romney was able to get Gingrich on his heels early, saying Gingrich had to resign the speakership "in disgrace" (more on that here) and, most effectively, describing his rival as an "influence peddler" who grew fat off his Washington connections. Romney's attacks made a convincing case that Gingrich's claims that he wasn't a lobbyist - because he never registered as one - amounted to obfuscation.

And Romney didn't just focus on the fact that one of Gingrich's companies was paid at least $1.6 million by Freddie Mac, the government-backed mortgage giant that many conservatives (particularly in hard-hit Florida) blame for the housing crisis - though Romney hit Gingrich hard on that front. He also pointed to Gingrich's advocacy for Medicare Part D, the prescription drug program that amounted to a significant expansion of Medicare. As he did so, the Romney campaign emailed reporters news stories like this one documenting lawmakers saying Gingrich pressured them to vote for the program - while he was being paid by health care companies.

"Here's why it's a problem, Mr. Speaker. Here's why it's a problem," Romney said. "And that is, if you're getting paid by health companies, if your entities are getting paid by health companies that could benefit from a piece of legislation, and you then meet with Republican congressmen and encourage them to support that legislation, you can call it whatever you'd like. I call it influence-peddling."

"It is not right. It is not right," Romney continued. "You have a conflict. You are -- you are being paid by companies at the same time you're encouraging people to pass legislation which is in their favor."

Gingrich was saved at that point by a commercial break, which seemed to be a lucky break - he simply didn't seem to have an answer to the line of attack.

The Romney campaign has all but admitted that it is turning all its guns on Gingrich in the wake of the former House speaker's double-digit win in South Carolina, a pivot reflected in the fact that Romney took more than an hour to level his first serious attack on President Obama. Romney has tried to stay above the fray in the past, but he admitted Monday he had been forced into a position of "returning fire" against Gingrich.

Indeed, Monday night appeared to be a reversal of sorts, with Romney playing the attacker and Gingrich in the role of the frontrunner who doesn't want to engage. Earlier, when Romney unleashed a torrent of attacks, Gingrich said he wouldn't "spend the evening trying to chase Governor Romney's misinformation." He said that Romney "said at least four things that were false" - but didn't bother to explain what they were, instead pointing viewers to his website, where he said the response would be posted - tomorrow.

It was a missed opportunity for Gingrich to go on the offensive, something he has done so well in past debates when challenged. And it also reflected a significant tactical error. Gingrich's appeal to conservatives is his willingness to not just battle his opponents but humiliate them - just ask CNN moderator John King, who dared raise allegations from Gingrich's ex-wife that Gingrich had sought an "open marriage" in a debate last week. That was the Gingrich that Republican primary voters want to see battling President Obama.

Technically, there were four candidates onstage Monday night - though the debate so often turned into a bickering match between Romney and Gingrich that you might have forgotten that Rick Santorum and Ron Paul were present. Neither man got much of a chance to talk, and their second-fiddle status meant that they had little opportunity to win over undecided voters. That's not a huge problem for Paul, who has the passionate support to keep him funded and fighting for delegates over the long haul (and who isn't even contesting Florida, an expensive winner-take-all state where he is unlikely to win a single delegate.) But it's bad news for Santorum, who is running out of time to convince Republicans that he is more than a guy who they like but who doesn't have any chance of becoming president.

If you didn't get enough Monday night, not to worry: The next GOP debate - the 19th in the cycle, for those keeping track - comes on Thursday. It'll be Gingrich's last chance to use the debates to counteract Romney's organizational and financial advantage before Florida's January 31 primary; don't be surprised if the former speaker still has a trick or two up his sleeve.

Romney on immigration: I'm for "self-deportation"
Mitt Romney: People "will talk," but "no surprises" in tax returns
Romney goes on offense in GOP debate
The GOP's race to the nomination reality show